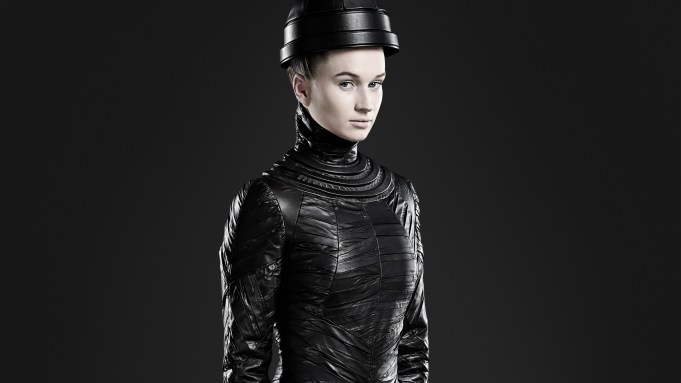 MILAN – Eight ancient civilizations that flourished and fought on Anatolian turf animated a Turkish leather exhibit in Milan on Saturday.

Dissolving the boundaries of sculpture, history, fashion and trunk show, the Turkish Leather Council commissioned a leading fashion designer from home to channel her creativity and artistic leanings into a conceptually rich installation to show off the virtuosity of Turkish leather craftsmanship.

The exhibit, entitled “The Leather Age, the 8 Civilizations of Anatolia”, was up for just one day – under the patronage of the Camera della Moda Italiana – and pointedly aimed at fashion operators and media to boost Turkey’s reputation and facilitate new partnerships. The Turkish Leather Council Chairman, Erdal Matras, said they aimed to take the exhibit to New York next, though exact location and dates remain to be set.

“We had this show in Istanbul first,” said Matras, who added that the Turkish Leather Council was celebrating its tenth anniversary.

“It’s a one of a kind project, a timeless project. It tells of eight civilizations that passed over our land,” Matras said, “It speaks to the capabilities of the industry, and gives clues about Anatolian history…and an idea of what Turkish designers can do.”

A phalanx of 16 thick black leather outfits resembling armour for some atavistic future existence, stood in a large hall of the 18th century Palazzo Serbelloni.

“There are eight couples, a man and a woman for each civilisation,” said Hatiçe Gökçe, the designer who created the exhibit.

The “Trojan” woman wore a crested helmet and leather body suit sporting formidable shoulder cuffs. It was covered from head to toe in hot-pressed, 3D reproductions of scenes from archeological bas reliefs of the Trojan War.

Three days of work, and 2000 to 3000 small padded inserts were stitched into the rectangular patterning of the “Assyrian” man’s outfit, with his tight-fitting pants and the thick, concentric panelled sleeves. “Assyrian” woman’s ensemble, with draping leather skirt petals, required more than twice that work, at seven days.

Laser burned imagery in the Hittite sheepskin coat had an ancient, archeological look thanks to different time-settings and tints deployed.

A highly respected menswear designer, Gökçe has a boutique in Istanbul called Karakarga (black crow in Turkish) that sells her own line. She also designs for and dresses a roster of celebrity clients, notably Turkey’s hottest male popstar, Tarkan.

A visitor to her show, the Israeli-born fashion designer Yossi, has worked with Turkish craftspeople and manufacturers in the luxury sector for the last three years.

“Turkey is like the hidden treasure,” Yossi said. “For the last 10-15 years, it has been known as a source of cheaper labor, and used as a manufacturing source for inexpensive production. But there is a whole other historical DNA to the country.”

With its deep-rooted craft traditions in making leather, carpets, jewellery, and woven textiles, Yossi said it is easy to marry handiwork and industrial production to suit his creative vision.

Large luxury labels are also discovering Turkey as a production resource, according to sector sources.

“Leather manufacturing goes back to the heritage of saddlery,” said Burak Celet, CEO of Turkey’s largest leather goods maker, Desa, which is a publicly traded company. Desa’s line of luxury bags, Desa Nineteenseventytwo, were on show at the penthouse of the Baglioni Hotel during Milan Fashion Week.

“Turkey’s tanning capacity is among the top five in the world,” said Celet, who is also on the board of of the Turkish Leather Council.

At least 65% of the world’s supply of shearling wool on leather also comes from Turkey, according to Matras.

Celet said that Turkey’s leather industry, like Turkey itself, serves as a crossroads of East and West, able to mesh international creative, productive and business visions with the country’s deep artisanal roots, to produce at international high end standards at affordable production costs, relative to other high level production centers.

“This is about finding good partners. It is not about competition anymore,” Celet said, “It is about partnership and establishing a stronger base.”