Turkey’s textile and apparel industry is capitalizing on the Syrian refugee crisis by employing — and often exploiting — them.

By Dene-Hern Chen
with contributions from Onur Cakir
on May 18, 2016
View Slideshow 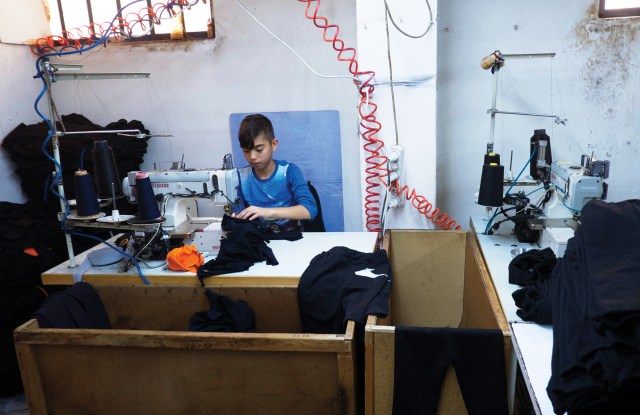 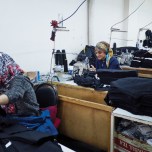 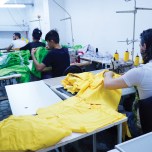 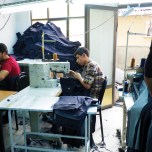 For Abdurahman, his job is a family affair.

Originally from Kobanî, a Syrian city bordering Turkey, he now toils daily in the basement of a small-scale factory stitching pants alongside his brother and his brother’s wife. Their nine-month-old baby is in the factory with them, swaddled among stacks of lightweight pants waiting to be folded.

Abdurahman’s 14-year-old son is there as well, bent over a sewing machine in the basement’s corner.

Working more than 10 hours a day for five days a week, Abdurahman receives about 1,400 Turkish liras a month, roughly $495. For an employee with his skills, he should be receiving nearly double that, he said.

“Turkish people get paid more,” the Syrian refugee told WWD in a hushed voice. “Also, the Turks get covered by insurance and I do not get insurance.”

Abdurahman is among the more than 2.5 million refugees who have fled Syria’s armed conflict since 2011. Since the refugee camps along the border can hold only 270,000 people, the majority of them have scattered into cities and joined the ranks of Turkey’s robust — and largely unregulated — apparel manufacturing sector.

As the government struggles to implement long-term solutions for the ballooning population, the country’s textile sector is employing scores of refugees. Manufacturers contend that squeezed profit margins are pushing them to employ these workers at low wages, yet there are allegations that labor and human rights abuses — including child exploitation — are rampant in the absence of adequate government protections.

The third-largest textile exporter to the European Union, Turkey’s apparel and manufacturing industry has been plagued with criticism from labor groups. In 2012, Clean Clothes Campaign estimated that more than 1.5 million people were working unregistered in the country’s textile industry, rendering them vulnerable to workplace exploitation.

The issues include getting paid below the government-mandated minimum monthly amount of 1,300 liras, working excessive overtime hours under unsafe conditions and the widespread employment of underage workers. Monitoring this situation can be tough as Turkey’s industry includes tens of thousands of micro- and small-scale workplaces, where the workforce can be 50 people or less.

While there are no official figures of Syrian refugees working informally in the textile industry, the number could range from 400,000 to 800,000, said Ergun Iseri, deputy secretary general of DISK Tekstil, a local workers union affiliated with IndustriALL.

“The biggest problem is that the Turkish government opened up the borders to everyone to enter but did not provide them a secure or livable environment, and since they do not have the means to sustain a lifestyle of their own, the refugees agree to work under any circumstances,” Iseri said, adding that desperate families have to resort to desperate measures, such as allowing their children to work in the factories.

“There is a problem of child labor in general in Turkey. It’s the same case for Syrian children, and obviously Syrian families have it harder because they are trying to survive and they need everyone in their families to bring income,” he said.

According to teenager Abu Yunis, he is not the youngest person working at his factory. The 16-year-old from Aleppo was smuggled in via the southeastern border town of Kilis and arrived in Istanbul just three months ago. He started working as a cleaner and porter at a pants factory, thanks to his older brother, who is employed there as well.

“There are people younger than me working there, from nine to 11 years old even. All the kids working are Syrians,” he said, adding that he receives 700 liras, roughly $250, a month.

In an attempt to discourage refugees from crossing illegally into the rest of Europe, the Turkish government enacted a new law in February allowing them access to legal work permits, which should aid them in finding work as registered employees. In an industry that relies so heavily on informal workers, factory owners are not in any hurry to get work permits for the Syrian workers.

Alaattin, the owner of a factory located in the western district of Bagcilar, said he would not be able to afford to register every single one of his employees as the payments he is required to make for social insurance would be far too costly.

“For most of the workplaces, the social insurance is too high, so most of the places do not insure people because otherwise we would all go bankrupt,” said Alaattin, who works alongside his employees stitching jeans, and asked that his last name be withheld. “In this current economy, a factory can only insure at most two people. For each person, you would have to pay 600 liras just to insure them, so the rest are all unregistered workers.”

His small-scale workshop employs 25 people to produce jeans for Turkish label Denim Republic, which are sold within the domestic market and exported to Germany. Fifteen of his employees are Syrians, but Alaattin remains unworried about the legal consequences for hiring unregistered workers.

“Even without the permit, it is fine. Everybody was already employing Syrian refugees,” he said cheerily. “I am already suffering from a lack of workers, so I would be happy for people from anywhere to come work for me.”

The owner of another Bagcilar factory, which produces clothing for popular Turkish brand LC Waikiki, said registering the refugees and paying for their insurance would be pointless anyway, as a majority of them will persist in journeying further west.

“The Turkish workers are all insured. But the Syrians, they don’t have social security and they are all unregistered,” said the owner, who requested anonymity. “They aren’t here for that long because they all want to go to other parts of Europe.”

Out of the more than 100 people working on the premises, 35 of his employees are Syrian refugees. He said training for the refugees often has to start from the very basic — such as teaching them how to properly hold a pair of scissors — and could take up to six months before they are skilled enough to work on an assembly line.

“We cannot stand it. We cannot afford it, and we will lose the factory if we paid for everyone’s social security,” he said. He suggested that the government and the rest of Europe should pay for the social insurance if they are going to insist on all the refugees having formal work.

Last year, U.K.-based think tank Business and Human Rights Resource Center sent questionnaires to 28 major retailers sourcing from Turkey, including LC Waikiki, to ask about their procedures to ensure that Syrian refugees were afforded the same protections as a Turkish worker.

In a statement provided to the think tank, LC Waikiki said they “prohibit discrimination and exploitative practices against any employees, whether Syrian or any other nationality.”

“Child labor is also strictly prohibited, again regardless of the nationality of the children,” the statement, published in February, said.

Repeated calls to LC Waikiki for further comment were not returned.

Meanwhile, H&M and British retailer Next admitted to BHRRC that they had found underage refugees working in their supplier factories and were seeking remediation methods to ensure that they were getting an “education option.”

As for Syrian refugees identified who were working within the supply chain, the majority of the 28 brands said their supplier factories have to ensure that all workers were registered and afforded the same wages and social benefits as their Turkish counterparts.

Despite this new push, Abu Zakor is doubtful that anything will change.

“Everywhere, in all the factories, the Turkish gets paid more than the Syrian,” said the 22-year-old from Aleppo. “[They get] 500 to 600 liras more than us because they have their work permit and the social insurance. They can go to hospitals and they can get pensions.”

Zakor and his brother are struggling to make ends meet as they have to send half their monthly paychecks home to support their family, who still live in Aleppo with their younger siblings. Their arrival in Istanbul two years ago came after a long perilous journey through Lebanon.

“My father and mother are too old; they cannot run to cross borders. And the rest of the family are small children so we didn’t think they would survive the trip,” Zakor said.

He added that life would be too challenging for them in Turkey anyway. At the moment, he shares a small apartment with seven young men in the western district of Bagcilar, home to a large Syrian population. The neighborhood is crowded with informal textile workshops; walking past the buildings, it is not unusual to hear the sounds of whirring machines drifting from basements.

They are also treated differently by their Turkish counterparts and face blatant racism in the workplace. “Some of them don’t like the Syrians,” Abu Zakor said. “They will say, ‘Go back to your country, you are taking our jobs.'”

Meral Cildir, executive committee member of IHD, a prominent local human rights group, said its biggest worry is the growing xenophobia that could lead to violence in the workplace.

“Since Syrians are working for less money for the same job descriptions, Turkish workers have developed a xenophobia against Syrians, and rather than questioning the system that results in these consequences, they actually conclude that it is the Syrian workers who are guilty,” she said.

In recent years, there have been reported instances of anti-Syrian violence, most notably in the southeastern province of Gaziantep, which also serves as a garment and textile production hub that has folded refugees into its labor force. In 2014, rumors and fear-mongering sparked violent protests by locals, which left a dozen refugees wounded in its aftermath.

Cildir added that the media, largely controlled by the government, also fuels the xenophobia and obfuscates the facts, so violent incidents may be higher than reported. Human and labor rights groups also find their hands tied because cracking down on this issue would lead to a more dire situation for the refugees.

“We are concerned that they would lose their jobs. At the end of the day, [resolving this issue means that] they might lose their income,” she said. “If you stop that, they might end up in the border camps, which would be a much worse outcome.”

Ankara did not respond to repeated requests for comment, nor did representatives of the Istanbul Textile and Apparel Exporters Association.

For Abdurahman, he has taken matters into his own hands. Since arriving in Turkey from Kobanî in 2011, he has labored to get four of his children to Germany.

“I smuggled them there and paid $10,000 to send them,” he said, flicking through photos of his teenaged children on his phone. Reuniting his 14-year-old son with them, and following after and seeking asylum in Germany is his ultimate goal.

But for now, Abdurahman’s more immediate concern is to avoid trouble with his Turkish employer for returning late from lunch.

“We appreciate the government welcoming us to live here but it is very difficult. The government said that we can come [but] when we do, they do nothing to take care of us,” he said, before scurrying down into his factory’s basement.