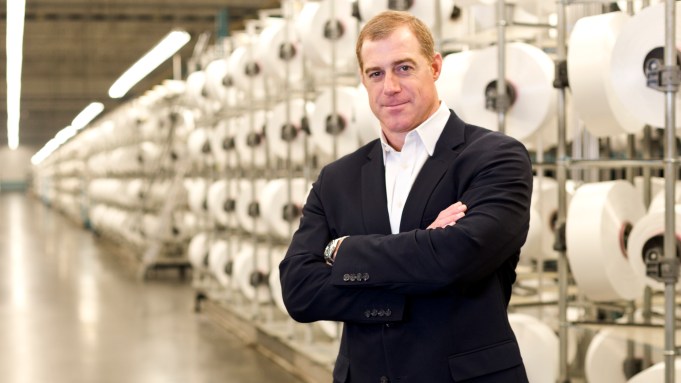 YADKINVILLE, N.C. — Unifi Inc. and its Repreve-recycled polyester brand are combining a commitment to Made in America and a mission of eco-friendly manufacturing in a big way in small towns in North Carolina.

That’s big, as in the largest texturized yarn manufacturing facility in the country with 72 texturing machines at the Repreve Recycling Center here and a Bottle Processing Center in Reidsville, N.C., that produces 75,000 pounds of clean PET flake a year from post-consumer plastic bottles, recycling more than 2 billion bottles a year.

Jay Hertwig, vice president of global brand sales, marketing and product development at Unifi, after conducting an extensive tour of the recycling center, and fiber and yarn manufacturing facility, said, “There may be some larger yarn texturizing facilities in Asia, but none that are as fully automated.

“We have to give all the credit to the vision that the founder of the company, [George] Allen Mebane, had,” Hertwig continued. “When he built the facility here in Yadkinville and the one in Madison, N.C., [where nylon yarn is produced] in the mid-Nineties — right when we started to see the transition of manufacturing from the U.S. and into Mexico and into Asia — the infrastructure that he put in at that time with automation and equipment was state of the art. I believe that early investment was what has kept Unifi solid and Unifi’s commitment to manufacturing, and certainly over the last 10 years, our commitment to the environment and eco-friendly product.”

In Reidsville, new capital investment of $28 million has been made for bottle sorting equipment and flake processing equipment. Energy and water conservation measures include using water heated from a dye house waste water heat recovery system and waste water treated and reused in bottle washing.

A tour of the Bottle Processing Center showed the process that begins with manual sorting to remove items that could damage equipment from loads of recycled plastic bottles brought in from facilities up and down the East Coast. This is followed by various machines and processes that remove heavy trash such as gravel and glass and aluminum cans, while Nihot Windshifters vacuum out paper, plastic bags and film.

In Yadkinville, huge grinders turn bottles into flake by chopping them into small pieces, all the while separating them into white and green flake. Only white is used in Repreve, while green is sold into the industrial market, although Hertwig said tests are being conducted for using green flake in darker color yarns.

The flake is then scrubbed clean in a friction washer and rinsed before being spin dried and air-dried to get the last bits of moisture off.

At the Repreve Bottle Processing Center, Unifi produces 800,000 pounds a week of flake, equal to 1.3 million miles of yarn.

In all areas of both industrial facilities there were ongoing efforts toward safety, cleanliness and efficiency, operating in a modern, automated expansive environment.

“Unifi has definitely had a continued interest and a continued strategic investment plan toward innovation and technology, specifically in the direction of recycled polyester with the evolution of our Repreve product and brand,” Hertwig said. “Part of our strategy of restructuring and reviving the company since the 2007-2008 market crash has been to continue to invest in what we call our premium value-added technologies and products. We have been able to grow that business year-over-year, really starting out where Unifi was largely a commodity yarn supplier and to date we have converted about 35 to 45 percent of the yarns we produce here today are now PVA versus commodity.”

That, coupled with investment in research and development, technology, recycling technology and equipment, has helped developed the platform for Unifi to “excel and accelerate,” he said.

Repreve is now 10 years old and while the company is pleased with the success, “we think Repreve has only just begun, especially with what we’re seeing in the marketplace and some validated demand from brands and retailers, and even at the consumer level, for eco-friendly, environmentally conscious products and materials.”

Hertwig said being a U.S.-based publicly held company with “significant manufacturing assets” in the Western Hemisphere, but also with global production and distribution of value-added technologies “has made Unifi a value to a lot of U.S. brands and retailers because we are here.”

“And even though the brands today spend a tremendous amount of time traveling to the Far East to source and develop their product, with Unifi’s global platform and capabilities they can come to North Carolina so we can come to them and we can start that process, even if they’re sourcing their product from China or Vietnam, where we have a supply chain set up,” he said.

Unifi employs nearly 3,000 workers globally, with more than 2,200 domestically, including 1,137 in Yadkinville and 346 in Reidsville.

Among the key brands for Repreve are The North Face, Haggar, Levi’s, Under Armour, Quiksilver and Ford Motor Co. Hertwig said Repreve began with five brands as customers in 2007 and has grown to more than 250 brands today. The fiber is starting to penetrate the European market with companies such as H&M and Zara.

“We’re pretty excited for the opportunities to grow Repreve product offerings and Repreve plus whatever the market demands are,” he said.

Unifi has manufacturing facilities in the U.S.; El Salvador; São Paulo, and Bogotá, Colombia. In addition, it has capabilities in China and recently inked licensed manufacturing deals in Vietnam and Turkey to produce Repreve yarns.

The U.S. market is the primary focus from a brand and retailer aspect, he noted, with a secondary focus the European market. About 50 percent or more of Repreve goes into apparel, with the rest in automotive, industrial and socks and hosiery.

“We’re very well positioned for any Made in America scenario from a fiber standpoint,” Hertwig said. “We still think there’s some opportunity out there, but we’re still waiting for some of these big brands to commit.”

He noted Under Armour, Adidas and Nike as brands taking steps toward larger scale U.S. production.

“I would say that through our interaction with some of the big brands and retailers that there is a growing trend for local manufacturing,” Hertwig said. “We’ve been fortunate to have been part of that in several parts of the world, but we’re looking for that to get bigger as some of these brands look to expand in their success.”

Hertwig credited the state of North Carolina for creating a strong business climate and programs that support local manufacturing.

The Greensboro-based Unifi has invested $130 million over the past three years to expand production of its Repreve fibers and other PVA yarns. The effort has included recent plant expansions in Reidsville and Yadkinville, projects supported by the Economic Development Partnership of North Carolina and its partners.

The EDPNC supported those job-creating projects by making Unifi aware of available grant funding that could help expand existing facilities.

With its recent expansion, the bottle processing facility added 85 to 90 jobs to the 350 that already worked there.

Earlier in the year, Unifi finished a $10 million expansion of its Repreve recycling center that added 19 jobs at the yarn-manufacturing plant, which has roughly 1,000 employees. As part of the Reidsville project, Unifi received a $500,000 state grant that supported adding 80,000 square feet to the 47-year-old facility, noted a report from the EDPNC.

As Hertwig cited at several stops along the production line, Unifi has built in-step to insure the ability to make shorter runs on styles and colors, and be able to serve a range of customers.

“Flexibility is definitely key,” he added. “Small lot capability and specialty products are the wave of the future.”