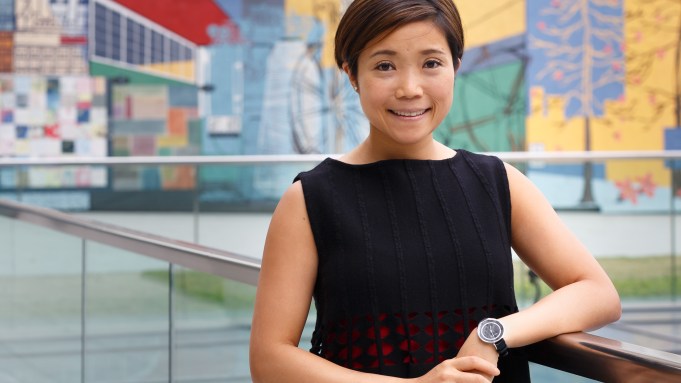 HONG KONG — Like a lot of children who grow up in magnate families, Vanessa Cheung wasn’t so sure she wanted to work for the family business.

Cheung’s grandfather, Chen Din Hwa, founded Nan Fung Group as a textiles business in 1954. It was the days before Mainland China had opened up as an option for global manufacturing and Chen’s business grew quickly, earning him a place in the billionaires’ club and the nickname the “king of cotton yarn.” At its textiles operations height, Nan Fung employed more than 3,000 people to operate in their mills, producing up to 32.5 million pounds of yarn a year.

But the industry migrated across the border into China proper in the Eighties — lured by cheap labor and other costs at a fraction of the price — and Nan Fung shifted gears, focusing instead on developing a property empire across East Asia. The textiles operations faded away and by the time Cheung, who had embarked on a career as a landscape architect, was convinced to join Nan Fung, three of the former six mills the company owned had been turned into residential units, and the other three simply were used as warehouse space.

It was those three remaining disused mills that caught her attention. Although her main duty as a managing director of the group is to oversee the Hong Kong property portfolio, she had the idea to reinvigorate those buildings. The undertaking, which became The Mills, transformed the buildings into a hub with three pillars: Fabrica, a start-up incubator; the Shopfloor, a retail space providing artisanal coffee and independent boutiques, and the Centre for Heritage, Arts and Textiles, which hosts exhibitions related to the craft.

“When I joined the company, it was the 60th anniversary,” Cheung told WWD. “I was quite inspired by the company’s history, which a lot of the people at the company didn’t know much about and I thought it would be a good way to use this opportunity to celebrate the company history and the textile industry’s history.”

“At first we thought of just building it as a museum, but thought it could be too boring,” she said. “And also, it’s quite a big space. We wanted to bring in things that could be more applicable to the future, as well, and also have a viable business model. Then we added in the incubator and coworking side and also a retail side.”

The process of transforming the former factories, which bore a construction cost of 700 million Hong Kong dollars, or $89 million, provided many insights for Cheung. Although the family’s original fortune came via textiles, she was too young to have direct exposure to it herself growing up other than the tales her grandfather would tell at the dinner table.

“I knew it was a big industry in the Fifties, Sixties and even the Seventies, but I didn’t know it was that big,” Cheung shared. “Every person I talked to, even government officials, has at least one relative if not immediate family member who was working in the factories in Hong Kong at the time. That was really surprising to me and how much pride they had in their job at work.”

During The Mills’ grand opening in December, the company invited back several former factory workers, now well into retirement, some of whom had even kept their aprons and staff cards.

However, as much as The Mills is a look into the past, the project is designed to be forward-thinking and the hope is to inspire the current generation of Hong Kong-ers to become interested in the field.

With the incubator Fabrica, The Mills takes entrepreneurs either in the fields of “tech” or “style” — a play on the word “textile” and helps them develop their business concept.

“It could also be wearables and we’ve been working with emphasis on sustainability with an environmental impact or social impact. It’s not limited to just fashion design,” Cheung said.

There are 10 such entrepreneurs at the moment, although there’s no formal cap on the number, nor a set duration of mentorship or take-in date. Cheung wants it to be as practical as possible and offers help when the start-ups need it and for as long as they want it.

“We teach them business skills, how to network and we also take them with us to lots of conferences,” she said. “We match them up with manufacturers — real concrete help that will help their business, not just [giving] money.”

“I think a lot of times now businesses don’t necessarily require a retail front or a shop space,” Cheung noted. For the most part, the start-ups don’t see getting a shop front as a big milestone or measure of success, or office space, for that matter. “The start-ups that we talk to, they don’t even want an office space. They work from home or just want more flexible space.”

At CHAT, the gallery section, the focus is to spark community involvement. Sometimes that’s as straightforward as offering knitting and crocheting classes to the public, or it could mean inviting artists to think up interactive projects.

One project saw an artist build the basic structure of a dragon before inviting the public to help weave the rest of the body with him. The dragon was eventually used in a traditional dance at The Mills’ grand opening ceremony.

Another workshop paired young designers to work with an innovative antibacterial fabric to make aprons for neighborhood wet market vendors.

“We’d pair a young aspiring designer with actual vegetable stall vendors, fish mongers, butchers, to understand their needs and design a new kind of apron they would use according to their trade,” Cheung said. “That became a very successful initiative and campaign. People wanted to buy these aprons, and we came up with a domestic friendly version of the apron as well and we sold them over the holiday period.”

The goal isn’t to make a profit with The Mills’ activities, but “we hope it will be a self-sustaining project,” Cheung said.