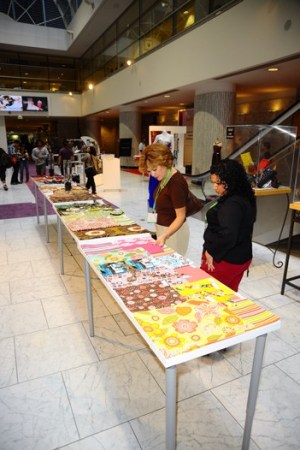 LOS ANGELES — Textile vendors felt the impact of the stalling economy and many designers sought bargains while delaying orders at the Los Angeles International Textile Show.

The expo, which ended its three-day run Oct. 29 at the California Market Center, featured 280 exhibitors, including 80 from South Korea and 15 from Europe. Although there were designers who sought quality goods such as silk, cashmere and elaborate rhinestone trims, many inquired about less-expensive options such as rayon. Vendors said customers did not want to take risks.

Several textile vendors said the slowdown at retail has caused apparel manufacturers to hold off buying fabric. While the fair was intended to highlight fabrics for fall-winter 2009, some vendors continued to exhibit their spring offerings.

South Korea’s A Jin Corp. said one popular style for spring was a white mesh embroidered with swirls of polyester tinted pink and orange. New York’s U.S. Silk said, unlike its East Coast customers that finished buying fabrics for spring, clients on the West Coast were still considering placing orders for the season.

“We want to minimize the spending,” said April Mun, who searched for silk, jacquard and other fabrics for her contemporary clothing line Stella & Jamie. “We definitely want to be under $30 [per yard].”

Vendors tried to stand out from the competition with novelty.

The designers who were willing to spend money on materials kept an eye on quality.

Fred Frankel & Sons, a New York-based specialist of rhinestone trims, said its bestsellers were the most expensive. For instance, rope cording adorned with clusters of rhinestones and metallic beads cost $39.40 a yard.

Turkey’s Kipas Holding said buyers opted for woven cotton fabric with finer yarn count because of the luxurious feel. Despite higher prices, cashmere-cotton blends, as well as slubs knitted out of Supima cotton and Modal, were also well received at Design Knit Inc. Italo Leather said buttery lambskin was a hit, as were skins dyed purple and turquoise.

Lace purveyor Sophie Hallette from France noticed designers gravitating toward softly textured lace composed of mohair or angora. Though the lace cost between $40 and $460 a meter, the trims were a more affordable option at about $10 a meter.

“When people do spend money, they spend it on quality and luxury,” said Jane Pincus, a New York-based sales representative for Sophie Hallette.

South Korea’s EcoTex offered finished jackets and other garments made of cotton knitted with silver and nanosilver yarn, which it claimed was good for people with sensitive skin.