The international textile show will be a test for how fabric mills can balance low prices with the trends and customization that help them stand out. 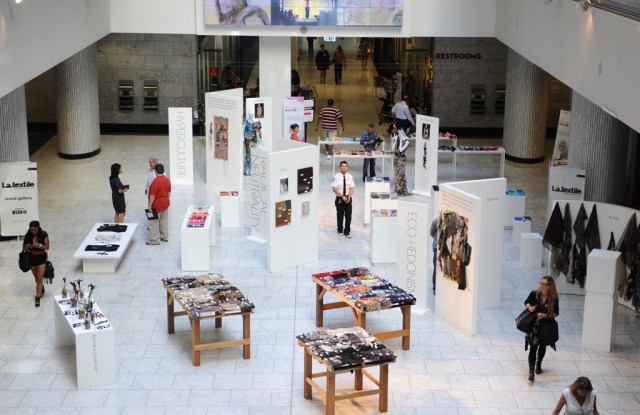 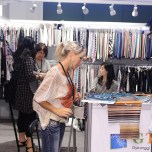 LOS ANGELES — Next week’s Los Angeles International Textile Show will be a test for how fabric mills can balance the low prices that clothing designers expect with the trends and customization that help them stand out from competitors.

At the semiannual three-day textile expo that kicks off Monday at the California Market Center here, an equal mix of domestic and foreign mills will try to lure apparel designers and manufacturers with their spring 2013 offerings while keeping an eye on costs. Although textile vendors said they benefit from the variety of fabrics being used in the market, they are challenged by the emphasis on low prices, even with high-quality materials.

“Companies are constantly demanding a lower price, which isn’t always possible when we are speaking of luxe fabrics versus polyester jersey,” said Tracy Simmer, a Denver, N.C.-based representative for Tessile Group Inc., which represents fine jersey lines from Italy and beading fabric mills from India. “It amazes me always [that] the final, ultimate client doesn’t know the difference. Therefore, even the upscale lines [are] mixing in cheap polyester fabrics and getting away with it in this climate.”

Several fabric and trim purveyors have had to raise prices over the last couple of years, passing them on to their customers — designers and manufacturers — who in turn have raised prices for consumers. Even as volatile markets such as cotton have stabilized, fabric and yarn prices haven’t decreased as much as vendors expected.

Still, consumers expect lower prices. According to a December study by WSL/Strategic Retail, a New York-based firm that researches shopper behavior and retail trends, 75 percent of women now say it’s important to get the lowest price on everything they buy, compared to 63 percent in 2008 and 53 percent in 2004.

“I try to keep prices down, but it’s been tough,” said Josi Severson, founder and designer of an organic cotton print line called Ten14 Textiles in Winona, Minn. “In the textile market, consumer spending is still not where it used to be. People are still cautious. They want to be adventurous, but not too adventurous, of what they buy.”

In an effort to loosen buyers’ restraint, Severson emphasizes what makes her line different from others. In addition to hand-drawing her designs for an Arts-and-Crafts style, she uses water-based, plastic-free, colorfast dyes in trend-right hues such as burnt orange, muddy pale blue and golden yellow from a Los Angeles-based printer. She also insists on using organic cotton canvas, voile, twill, jersey and sateen that connote quality even though they cost between $9 and $14 a yard.

Softness is a top trend for spring 2013, joined by subtle glitter and novel finishes such as lace with a snake print pattern or a metallic sheen. Prints include Pop Art influences and varying sizes that are either big and bold or mini and dainty. Color continues to pervade, with deep tints, neon and blue popping up in popularity.

For customers who want to set their own trends, vendors are offering customization.

For instance, France’s Bel Maille prints custom stripes on organic cotton, Micromodal and synthetic fabrics. While it can print as little as five yards for a sample run, its minimum order for production is 300 yards. Its freight on board prices range between $4 and $10 a yard.

Trim Expo Online in Los Angeles has been receiving good response for its customization, even though it costs 20 percent more than its standard goods. Introduced two years ago, the program allows designers and manufacturers to dye and design any trim to their liking.

“Manufacturers that come to us [say] they are getting in return requests from their customers that want something unique,” said Eli Khoramian, marketing director at Trim Expo Online.

Vendors aren’t the only ones adapting to an evolving market. The trade show’s organizer, the California Market Center, is adding more garment factories to evolve the expo into a textile and sourcing show. In addition to a long-standing relationship with the Korea Trade-Investment Promotion Agency, which hosts a pavilion dedicated to South Korean exhibitors, the center started working with Vestex, Guatemala’s Apparel and Textile Industry Commission, to bring textile and garment makers in a new section dedicated to the Latin American country.

Another region the CMC is targeting is India. Indian companies that will show embroidered and embellished fabrics at the show include Jaipuria Silk Mills, Manuela, Pinx and Sofiatex. Other new exhibitors include Malhia Kent from France and New Tess, a division of Italy’s Clerici Tessuto SpA.

“We’re just trying to bring a bigger variety of folks coming to the show,” said Oscar Rodriguez, the CMC’s textile fair producer, adding that the goal is “to make it a more well-rounded visit for the attendees.”

For a full schedule of events and other show information, visit californiamarketcenter.com.