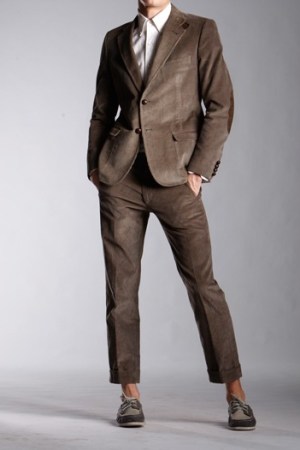 Miljanic drew from images of sport coats with leather patched-elbows, worn by pipe-smoking Harvard professors in the Sixties for a rustic feel. “I love the thicker cord blazer,” he said. For a more sophisticated look, a burgundy stretch corduroy hunter jacket had an iridescent sheen. Band of Outsiders took a similar approach, with designer Scott Sternberg choosing a waxed treatment for a stiff construction and a memory for wear. “It’s a suit for now, for a guy like me,” he said. “I’ve done corduroy before, but now I’m doing it in a better, in a fresher, more confident way, like including Ultrasuede elbow patches.” In Paris, Junya Watanabe kept his corduroy pants short and relaxed, paired with puffy vests and brown suede-pocketed tweed jackets for a taste of pure Americana.

Scarlet-hued corduroy created the ultimate juxtaposition on the Paris runway with an Armand Basi suit, its narrow wales resembling velvet from afar. The interpretation was more in tune with the defi nition coined in 1700s France, corde du roi, or “cord of the king.” At that time the fabric was woven of silk and used for royal servants (although some surmised a British manufacturer was just trying to glamorize his fabric with a fancy name). Hermès had its own take on brazen red in a blazer paired with simple black accents, simply crisp and luxurious.

For outerwear, sophisticated pieces on the runway came in the form of astrakhan, a heavy, curly textile that can either represent karakul lamb fur or piled mohair yarn and a combination of cotton or wool for the ground warp. Thom Browne chose a gray variety for his top hats. “The gray is quite handsome. I’d love to see this old man kind of hat on a young guy,” he said. Confessing to not really being a fur kind of fellow, Browne chose to use it sparingly as an accent piece on a utilitarian jumpsuit. “Astrakhan adds a couture feeling in a masculine way. Anyone can wear it that has the confidence to pull it off,” he added. The roots of astrakhan hats delineate to Soviet officers in WWII.

D&G kept the Russian theme alive in Milan with an ode to Dr. Zhivago and the Russian Revolution that took the form of a long brass-buttoned peacoat and black astrakhan lapel. Juun.J dressed a scrumptious leather bomber with astrakhan lining peeking from beneath. Ungaro kept it short and casual, while Wintle dressed it up as a tuxedo with fancy piping.

Going all out were Ferragamo and Hugo Boss, sending long black astrakhan car coats down the runway. Gianfranco Ferré one-upped the group in Milan, adding a funnel-neck for a modern edge. Giuliano Fujiwara took it full throttle, pairing an epaulet-adorned coat with black astrakhan pants for a full body look, surely not for the timid. Even more shocking was a shorter version in sunshine yellow. Hardly a recession hue.