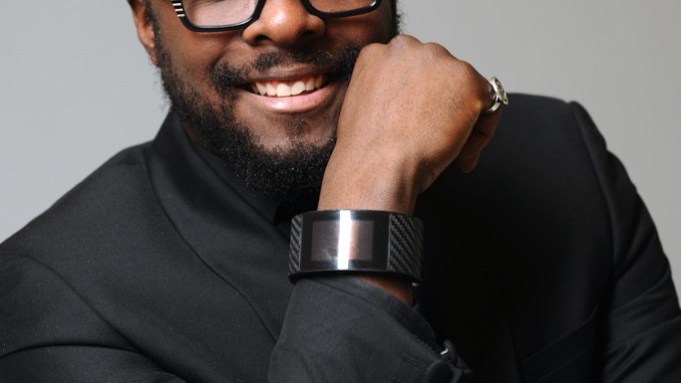 Will.i.am is bouncing with enthusiasm.

Perched on a gray leather and concrete built-in sofa in his sleek black recording studio (which looks like the modern-day version of the villain’s den in the James Bond classic “Dr. No”), he is discussing his newest venture, ill.i Optics by will.i.am. The dual-gender optical and sunglass line launches Sept. 16 in selected retailers worldwide.

“When you see today’s glasses, they are missing a little bit of what vintage glasses had. Then when you see vintage glasses —because I’m a collector, that’s my hunt — you just wish they had a little of today in them, so I wanted to marry the retro feel with futurism, take yesterday’s sensibility with today’s aesthetic,” said the musician, producer and entrepreneur, whose given name is William Adams Jr. When he takes off the pair he’s wearing (his current favorite) — a black acetate frame with a straight brow and squared-off lenses with gold inlaid stripes on either side — one can tell he puts his money where his mouth is — literally. Adams is funding the project, which he codesigned with his friend, Australian designer George Gorrow. And judging by the scratches on the frame, he didn’t just pick them out of a sample tray to wear for a photo shoot.

“I buy a lot of glasses; the new stuff is Linda Farrow and Dita, the old stuff is Porsche, Carrera, Persol, Gazelle. But lately I’ve been wearing ill.i because it’s exactly what I’ve been looking for,” he said. And priced starting at $300 retail, they’re not exactly disposable. “Well, that depends…” he said, clearly not wanting to quash his own retail strategy. “I’m a collector so I buy glasses all the time. Plus, I’m hard-core with my usage. Like these,” he said, pointing to his black suede and patent leather Giuseppe Zanotti slip-ons, “ I’ve only worn these twice and I’ve messed these bad boys up.”

Adams doesn’t like to sit still for long. He exits the dark studio and heads back out into the bright white, light-filled common area of The Future studio, the cavernous creative space he just took over from Technicolor in the Hollywood media district. It contains a photo studio, a recording studio, a hangar out back for video shoots, as well as business offices and a sleek kitchen. Britney Spears has recorded tracks that Adams has produced here and, today, 18-year-old Anja Nissen, the season-three winner of the Australian version of “The Voice,” is working on a track, having just shot her first video here the day prior. Nissen was on “Team Will” on the show, on which Adams was a judge. Along one wall, he has carefully arranged eight shelves of ill.i glasses based on his current preferences. “These are my today favorites, these are my yesterday favorites, these are my best favorites, and these are my worst favorites,” he laughed.

Even though he and Gorrow are usually on different continents, he said the collaboration works because “we’re ‘screenagers’ so we are always on our phones, tablets and computers.” Adams sets an example for tech-savvy entertainers, not just with his personal space, which has white iPads affixed to every wall and invisible wiring throughout, but with his ventures, from his music (he was a beta user of Tunepics and plans to release his latest compilation of new music on a dedicated smartphone app), to his products (he is director of creative innovation at Intel, and the initiative he launched with Coca-Cola called Ekocycle, which encourages recycling among consumers, launched with a 3-D printer among its products). Ill.i Optics, of course, will launch with a digitally led global campaign accompanied by a soundtrack Adams created.

It’s not hard to imagine what Adams has planned next. In fact, he’s wearing one on each wrist. Although his director of integration shoots him a look, he can’t help but show off his version of a “wearable.” “So the glasses are called ill.i and this is called i.am.plus. It’s a phone,” he said. “We’ll get into more of that later,” the director of integration interjected.

He continued, “This ‘wearable’ conversation is from tech people who want you to put things on your body, so first we have to design them in the same aesthetic as Gucci and Louis Vuitton and people who are making stuff we desire — then the tech should be invisible. So you need parallel paths. You need to make sure your stuff looks like something you desire to put on and not like something out of ‘Star Trek.’ Although I love ‘Star Trek.’”

So how does he keep it all straight? “Because I know this joins this later,” he said pointing to his glasses, then his wrist. “When you have things you put on your body that have tech in them, you need to design them the way you would design things that didn’t have technology in them. That’s why we’re starting with the aesthetics, like the glasses. Then we will put the tech in it, but all the while let’s start building the tech. You have to work in two silos: tech and fashion. All the while you know they are going to marry.”

And therein lies the future. Or rather, the future is staring us all in the face behind a pair of black acetate frames. “For me there is no diff between fashion and technology,” he said. “Let’s just fast-forward five years from now — you couldn’t distinguish between tech and fashion, they are all the same thing. You gotta work as if five years is already here or you’ll wait five years from now and somebody will have already executed your vision.”