Justin Timberlake and Trace Ayala were in Canada on Tuesday for an early preview of the collection via a fashion show. 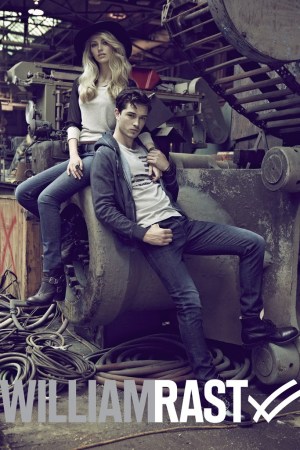 The William Rast brand is slated to hit all 90 Hudson’s Bay doors, including e-commerce, this fall.

Founded in 2005 by friends Justin Timberlake and Trace Ayala, Rast is positioned as a contemporary brand featuring a denim heritage and biker lifestyle along with a rock ’n’ roll influence. Key sportswear and outerwear items for men and women are part of the fall collection. Hudson’s Bay is building out the in-store shops — with 30 doors to feature William Rast in its store windows — set to be ready by the first week in September.

Liz Rodbell, executive vice president and chief merchant at Hudson’s, said, “The brand targets both men and women in a younger demographic who are fashion-conscious and appreciate style. The customer is drawn to a rock ’n’ roll glam aesthetic and looks for modern, edgy details in the clothing.”

She noted that the brand’s collection for fall also “represents a resurgence of blue denim focused on washes and fit, as opposed to the colored denim trend” that’s been abundant in the category.

The Rast brand was sold at Hudson’s in the spring as well, but only for selected items such as shorts and T-shirts as an in-store test.

Rodbell noted, “It was really an opportunity to start getting the customer familiar with the fits and they responded very quickly to the limited styles we offered.”

While the brand’s fall presence will be centered on sportswear, Hudson’s will continue to add categories to build Rast’s lifestyle options for its younger demographic, according to Rodbell.

Yehuda Shmidman, chief executive officer of brand management firm Sequential Brands Group, said those discussions are already in place and hinted that footwear could be the next category for expansion.

William Rast is majority-owned by Sequential. The cofounders still have a stake in the label.

Shmidman has big plans for the brand. In addition to Hudson’s, Rast has a smaller presence in men’s at J.C. Penney. The Sequential ceo wants to go big, eyeing a global department store presence for the brand. “The next region is Europe. The team last week was working with several different retailers about [the Rast brand] in women’s and men’s around the world.”

As for Timberlake and Ayala, Shmidman said the two are very involved with the business. “William Rast is their style. I love the fact that it really is them. They look at everything. Trace is super on the day-to-day stuff for us. Justin has input on the aesthetic.…It’s a true partnership,” Shmidman said.

Helping to showcase the new fall offering at Hudson’s on Tuesday were Timberlake and Ayala, who were at the chain’s store on Toronto’s Queen Street. Included was a short fashion show and afterward, a giveaway of concert tickets to Timberlake’s concert tonight at Toronto’s Rogers Centre, in which he is appearing with Jay-Z as part of the Legends of Summer tour.