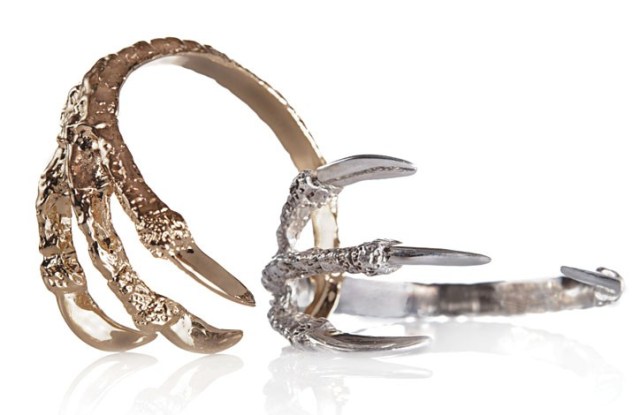 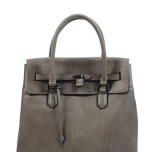 Brands well known for their women’s jewelry, handbags and more — including Coach, Rebecca Minkoff, Jimmy Choo, Swarovski, Pamela Love, Dannijo, Adrienne Landau and Made Her Think — are veering into more masculine territory with the introduction (or reintroduction, in the case of Jimmy Choo) of men’s collections.

For the fall 2010 season, Swarovski, Dannijo and Pamela Love launched their first lines exclusively for men, and spring brings the arrival of Ben Minkoff and Made Her Think. Jimmy Choo, whose small men’s shoe collection was discontinued in 2002, presented its fall 2011 offerings during Men’s Fashion Week in Milan in January.

So why the influx of men’s accessories collections? The trend appears to be driven by a combination of cultural changes — such as men’s fashion going mainstream and the growing acceptance for a man to “accessorize” — paired with a slew of technological advances that require accessories to protect and transport them.

Uri Minkoff, chief executive officer and founder of Rebecca Minkoff and Ben Minkoff, cites a “more enlightened male” and increased men’s fashion coverage, especially since the advent of social media and blogs. He also believes that male shopping has evolved through increased Internet usage, and ordering online has made the process of purchasing and returning easier, more efficient and all around more attractive to men in general.

“The need is also based on the fact that what men are carrying has changed. You have some portability issues beyond just your keys and your credit cards. There are more devices that require transport, whether it’s your phone or iPad. Fifteen years ago, all people had were desktops, so you weren’t really transferring your computer,” said Minkoff. “Men are actually carrying things around, especially if you’re in a metropolitan city like New York, San Francisco or Chicago. It’s not like you have a car.”

Ben Minkoff’s spring collection is available at Bloomingdale’s, Saks Fifth Avenue and benminkoff.com and includes wallets, which retail from $45 to $265, and totes, messenger and weekender bags, which retail for $175 to $695.

But it’s Kate Spade’s male counterpart, Jack Spade, which launched in 1999, that has been long considered a pioneer in the milieu of men’s accessories. In the nearly 12 years since the brand’s inception, its full range of men’s accessories has been carried nationwide at Saks Fifth Avenue, Nordstrom, Bloomingdale’s, Barneys New York and various retailers in Europe, and boasts five freestanding stores (with plans to open three more this year). It launched apparel in fall 2009, and it’s currently 40 percent of the brand’s overall business and a large growth vehicle for the company, according to Jack Spade’s vice president and general manager Cuan Hanly.

“No one was really doing [bags] for guys at the time. Since the beginning, we’ve been really focused on functionality, utility and bringing design aspects into our product,” Hanly said. “The men’s market has grown so dramatically, and guys understand that it’s not just about apparel anymore. It’s not as extreme as it is on the women’s side, but men are much more comfortable with bags and accessories being a part of their wardrobe. They’re also driven by functionality and use.”

Coach, another brand with a prominent men’s lineup (since it launched in 1941), is making a big global push into the category this year with the opening of several freestanding stores, including locations in Boston and Paramus, New Jersey, as well as additional units in 2012. The company opened its first men’s store in New York City’s West Village a year ago, and expects to double its men’s business in 2011, according to Michael Tucci, president of the company’s North American retail division. Additionally, there will be a focus on in-store shops within existing stores and expanding product categories to include messengers, commuter bags and totes, as well as key chains, luggage tags and iPad and laptop cases.

Tamara Mellon, chief creative officer and founder of Jimmy Choo, said it has always been part of her long-term vision as a luxury lifestyle brand to include both men’s and women’s collections. “I love a well-dressed man, and the first thing I look at on a man are his shoes,” she said. “The collection fuses modern British style with luxurious Italian craftsmanship, a Mod aesthetic with a cheeky hint of a 1960’s Mayfair playboy.” The selection of dress and evening shoes, moccasins, biker boots and trainers will retail for $595 to $1,295 and feature materials and finishes such as crocodile, hand-burnished calf, classic spazzolato, suede, patent leather, exotic stamped leathers and printed calfhair.

Produced in Italy, the collection will be sold exclusively on jimmychoo.com and in specialty and department stores worldwide, including Neiman Marcus, Barneys, Bergdorf Goodman, Saks, Nordstrom, Holt Renfrew, Mr. Porter and Jeffrey, with initial distribution limited to about 30 doors.

Adrienne Landau will also launch a men’s line for fall 2011, rife with mink, raccoon and fox scarves, collars and trapper hats. The brand even tapped Olympic figure skater, reality star and now designer Johnny Weir — famously threatened by PETA for incorporating fur into his costumes — to help design the collection, which will retail for $175 for a knitted rabbit beanie to $1,895 for a silver fox trapper hat.

Pamela Love, 2011 CFDA Fashion Awards nominee for the Swarovski Award for Accessory Design, which honors emerging talent, has been designing for men since 2007. She said her collection began as a unisex operation, but once the pieces became more geared toward the female wearer, she had to start creating a separate look book for men.

“Men’s fashion and accessories have become more publicized, so it’s more acceptable for men to be into fashion. I also think some of the trends and styles in men’s have lent themselves more to accessories. It’s not always about the supertailored suit; it’s the edgier styles with more components that lend themselves more to accessorizing,” said Love, who continues to offer her classic men’s styles every season, which include necklaces and cuffs adorned with skulls, crosses, rosaries and talons that retail for $225 to $1,250.

Dannijo’s Jodie Snyder worked in men’s accessories (in design and sales for ties from the wholesale perspective, specifically) for almost three years prior to founding the company with sister Danielle Snyder, and she attributes this as one of the reasons they decided to create a men’s line for fall 2010. Colorful cuff links retail for $165, a tight collection of bracelets and necklaces retail for $200 to $395 and iPhone cases, bowling and traveling bags retail for $395 to $1,000.

The two said they received frequent requests from men, and their holiday 2010 launch was a way to test the market. “The line is really utility driven. Men like to see function in everything that they have, whether it’s a briefcase or a bag. Looking good may or may not be an afterthought. We kept this in mind when we designed these key pieces. Men won’t just go shopping, they will go to buy a specific item,” Danielle Snyder said.

The Snyder sisters, who’ve done a lot of market research on men’s shopping habits, have plans to expand the men’s collection to include pocket squares and ties in the coming year.

“For us, we don’t see our male customer wearing tons of jewelry. We want to stay true to a men’s vision of what the Dannijo brand entails. A masculine, rugged, effortless man that doesn’t look like he spent an hour getting ready for work,” Jodie Snyder said.

Swarovski tapped Stephen Webster to create a 10-piece collection for Atelier Swarovski, aptly named Once Bitten because of its vampire theme and color palette of black, red, sea blue and silver, for fall 2010. The necklaces, cuff links and rings, which come with monikers such as the Bat Ring, the Cosmic Ring and the Divine Ring, retail for $70 to $325.

“Stephen Webster is a champion of edgy men’s jewelry. [He] was the perfect match to create our first men’s collection,” said Nadja Swarovski, Swarovski’s creative director and vice president of international communications. “With the high market demand for men’s jewelry, it was the perfect time to explore this rapidly growing trend.”

Meredith Kahn of Made Her Think launched men’s line Dess for the spring, which includes dome shaped, oxidized sterling silver rings that retail for around $200 and pavé, black diamond ID bracelets that retail for $900.