Uncertainty in the U.S. and other markets has fueled some tension in the yarn industry. 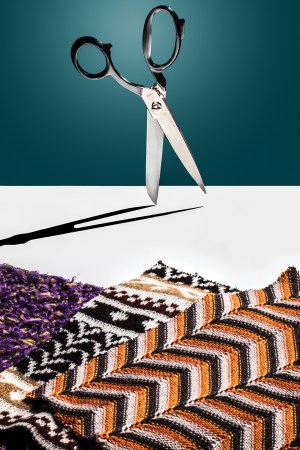 Turmoil among U.S. retailers has raised concerns for Italian yarn-makers as they prepare for the three-day Pitti Filati fair, which begins June 29 at Florence’s Fortezza da Basso.

The current year has seen the bankruptcy of Aéropostale and an ebb in revenue growth of major mall retailers like Abercrombie & Fitch and Gap Inc.

“We started the year strong, but we have seen a slowdown in orders in the past two months,” said Federico Gualtieri, vice president of Filpucci, noting revenues rose 4 percent in the first quarter of 2016 versus the same period a year ago.

Gualtieri said the retail phenomenon unfolding in the U.S. is indicative of a burgeoning global trend: Stores are closing as consumers increasingly shop online. The restructuring of major American firms signifies the dawn of a period of global uncertainty.

“Despite positive numbers, we are bracing ourselves for a retail slowdown from the high to low end,” said Gualtieri, noting that the U.S. makes up about 40 percent of his sales.

Wool specialist Botto Giuseppe, based in Biella, Italy, said its revenues are in line with the first half of last year.

“Japan and South Korea are performing well, Europe less so. We believe that full-year sales will be in line with 2015,” said ceo Silvio Botto Poala.

Semiannual data has not yet been released for the yarn industry, but a spending slowdown in major markets caused revenues of the Italian textile industry to drop 2.3 percent to 7.8 billion euros, or $8.7 billion, in 2015.

For yarn-makers here, Russia, which has seen its economy gripped by low crude oil prices, remains a concern.

“There are like 10 factors. It is really difficult to say in this moment what will affect wool-makers,” said Fabrizio Servente, global strategy adviser for Woolmark.

Raw-material prices, he added, will most likely not be a concern. Australian Wool Innovation’s monthly report showed that the emergence of new markets is eclipsing concerns regarding raw material prices.

“Wool prices are still rising, and when raw-material prices of wool rises, that means there is real demand for high-end wool yarns,” Servente added.

Overall, this edition of Pitti Filati will showcase 140 brands, including 30 foreign names from the U.K., Japan, Turkey, Romania, Peru, France, Germany, New Zealand and South Africa. At the last edition, there were 5,200 buyers and visitors who attended, of which 2,800 were international.

Fall 2017 collections will focus on comfort, performance and sustainability.

With its Atelier Collection, Cariaggi will introduce Storm and Iglo, two lightweight cashmere blends enhanced by an innovative palette of warm colors and “mysterious” grays and blues.

In light of an overall uptick in performance wear, Tollegno 1900 will present its new line of performance yarn of extra-fine merino and cashmere, as well as technical blends with strong fibers such as Tencel, carbon and siliconized nylon.

Event highlights at Pitti Filati will include the Pitti Italics presentations, a special event at men’s wear fair Pitti Uomo but being presented for the first time at the Filati expo, to bridge the gap between the two shows under the Pitti Immagine umbrella. The featured name at Pitti Filati will be a runway show by Sansovino 6, the brand founded by designer Edward Buchanan.

The Feel the Yarn competition for aspiring designers from some of the world’s best fashion schools will also return. Promoting the image and creative potential of yarns manufactured by top Italian mills, the contest calls for young talents to create original knit garments. Twenty-six students selected from 13 prestigious fashion-design schools around the world, and 22 Italian mills will unfurl their collections for the fall 2017 season.