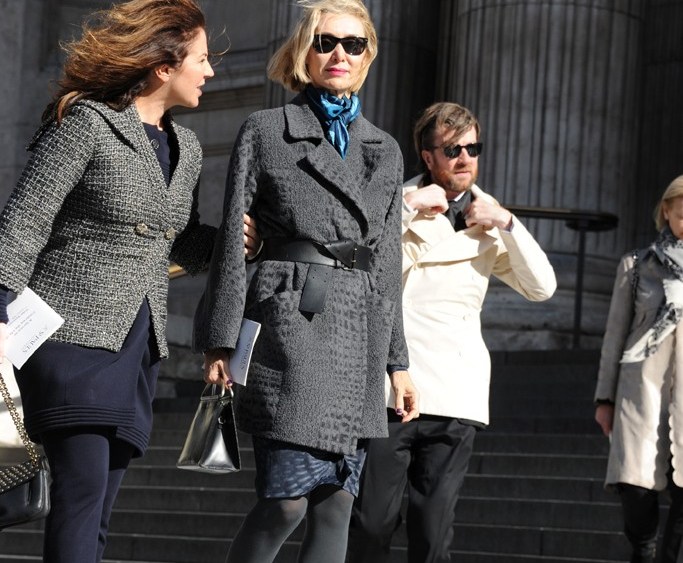 LONDON — Creative figures from the hairdressing, fashion, art, architecture, film and design worlds turned out in force on Friday for a service at St. Paul’s Cathedral here to celebrate the life of the late Vidal Sassoon, the go-getting and gracious hairdresser whose life was marked by family, soccer and his pioneering five-point cut.

“His two favorite topics were Chelsea soccer and beautiful women,” said his eldest son, Elan Sassoon, in a tribute that had the crowd of 1,500 laughing and, later, blinking away tears. “He was a great businessman, an honorable husband, and always faced up to his fears.”

Other speakers and participants at the hour-long service, which wove together elements of the Jewish and Christian faiths, included Jeremy Irons, Zaha Hadid, John Frieda and David Puttnam, Sassoon’s childhood friend and the producer of films, including “Chariots of Fire.”

The London-born Sassoon, who lived in Los Angeles, died in May, of leukemia, at 84.

Puttnam remembered Sassoon as “uniquely comfortable in his own skin” — despite the fact that his family was poor and he had been placed in an orphanage as a child after his father deserted his mother. He also talked about Sassoon’s first job as a shampoo boy working at Cohen’s Beauty & Barber Shop — one that his mother helped him to secure.

“He was a lifetime ambassador for his craft, and wore his celebrity lightly and with enormous grace,” said Puttnam. He added that despite Sassoon’s talents and commercial success — including salons worldwide and branded hair-treatment products — “He retained that very Sixties quality of not going into denial about his background.”

Irons said he met Sassoon “late in life, sadly” but remembered “white hair and a pair of spectacles concealing a boyish face. He was a man who needed to win and who never grew old,” said Irons, before reading aloud the A.E. Housman poem “To an Athlete Dying Young.”

Hadid admitted that Sassoon’s influence stretched as far as Baghdad, Iraq, where, as a teenager, she became inspired to cut her friends’ hair in the spirit of Sassoon. The experiment was not a success, the architect admitted, but her admiration for Sassoon has never died.

“I loved him for his modesty. He was a combination of pure genius and modesty, and that’s what made him special,” she said.

And while the service took place in a Church of England landmark — Sir Christopher Wren’s domed cathedral — there was a powerful sense of Sassoon’s roots and faith. “He was a proud Jew,” said Rabbi Julia Neuberger, who admitted to being a regular at one of Sassoon’s London salons. “He wanted to make the world a better place. He had a tough start, and his strong sense of Jewishness never left him.”

In his youth, Sassoon was famously a member of an underground Jewish antifascist organization, and he fought in the 1948 Arab-Israeli war as part of what was to become the Israeli Defense Forces. He would later return to hairdressing in London, developing geometric, wash-and-wear styles — radical for their time — including the five-point bob famously worn by Mary Quant.

Elan Sassoon said his father’s mantra was “Get on with it!” and that he was a health freak, breakfasting daily on carrots, celery and apple juice; swimming a mile a day, and practicing Pilates. His love of English football knew no bounds, and the younger Sassoon recalled his father waking him up at 5:00 a.m. Los Angeles time on Saturdays to watch the Chelsea games.

The British hairdresser Charles Worthington, a guest at the service, said afterward that Sassoon inspired him — and countless others. “He was a beacon for the industry — radical, brave, exciting and creative. And he was interested in everything and everybody around him.”