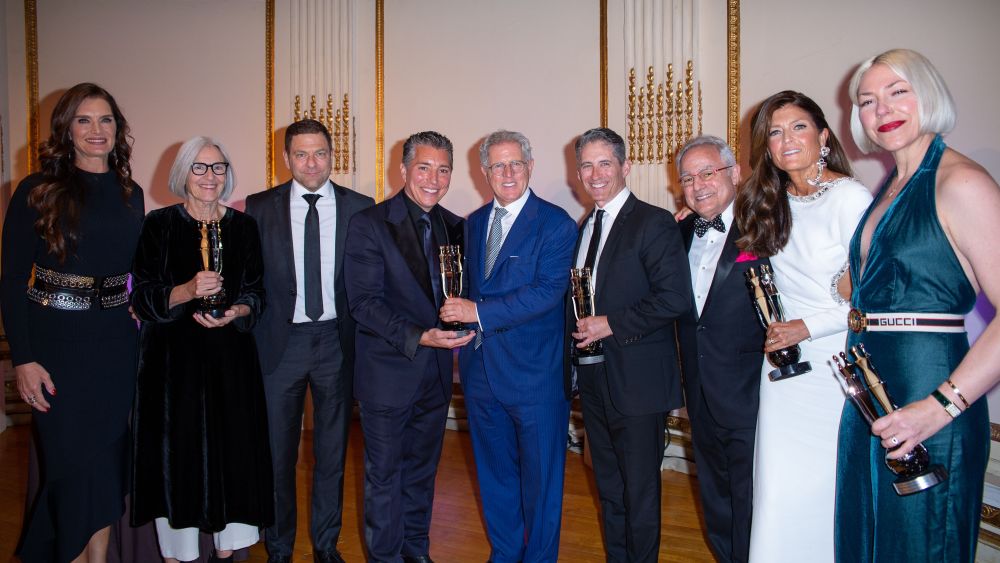 The event, hosted by Brooke Shields, took place at The Plaza hotel here and raised more than $1 million.

“This evening is about fashion’s future,” said Rick Helfenbein, president and ceo of AAFA. “We continue to find ourselves in a period of unsettling transition.” He said there’s profound change in the way the industry sells product and navigates the supply chain and this environment requires “the industry to be agile, to be visionary and most important, you have to be vocal.”

The AAFA represents 1,000 brand names and advocates on Capitol Hill and around the world, speaks on behalf of four million U.S. workers and accounts for $400 billion in annual U.S. retail sales.

Steven Kolb, ceo of the CFDA, noted that his organization’s foundation raises funds for such initiatives as HIV/AIDS, Fashion Targets Breast Cancer, the ACLU and Planned Parenthood.

In accepting her award, shoe designer Davis said when she was growing up, she never was a “boy-band girl,” and didn’t have pictures of cute boys on the wall, but she did have a picture of Brooke Shields on her wall. “She’s my inspiration, you still are unbelievably gorgeous,” said Davis. She thanked Disney for giving her an amazing opportunity to design adult princess shoes. “The shoes have sold out,” she said. “Women get it and are inspired by it,” she said.

WWD, which has covered the fashion world for more than 109 years, covers “one of the most competitive industries on the planet,” said Shields. James Fallon, editorial director of WWD, and Paul Jowdy, chief business officer and publisher, WWD and Fairchild Live, accepted the award.

“The industry has changed over the years, so too has WWD. We recently stumbled across a masthead from WWD in 1926, which showed that at that time we were a six-day-a-week printed paper. But what it also showed was that WWD was global before global became a thing — with offices in 18 cities across the world. And now that we are a purely digital publication, we are more global than ever, covering the news and trends from China to Cleveland, Paris to Los Angeles. Our circulation is at a record high and our web traffic continues to climb,” said Fallon.

David Kahan, ceo of Birkenstock Americas, was wearing black-tie with Birkenstocks. “I might be the most comfortable guy in the room,” he said. He recalled just a short while ago every fashion writer said that Birkenstocks were “the ugliest shoes they had ever seen. I’m not sure what that says about fake news.”

He said not many companies can trace their lineage back 245 years to a small village in Germany and “end up in a ballroom in The Plaza hotel.” He thanked his team, retail partners, AAFA and most important, “the millions of people who wear our product.

“You are our fans, and not just our fans, you are our passionate brand missionaries,” he said.

Fisher sits atop one of the largest women’s fashion companies to achieve B Corp certification, which generates more than $450 million in sales. She thanked her team as well as the AAFA for the work that it does “and the incredible power you have in the world to make a difference. You hold $400 billion of retail sales, and it’s amazing to think of the power that you hold. I want to thank you for the possibilities.”

She said her teams are obsessed with simplicity and timeless design and try to support women in the hope that they feel comfortable and confident. “Simple is really, really hard. Design is a powerful opportunity to change the world and make a difference,” said Fisher.

“Our industry is one of the worst polluters. I don’t want to be a downer. I think it’s a huge opportunity. Every day, we can actually make a difference in this crisis,” she said, noting the U.N. says we have 10 to 12 years, before we’re in a literal catastrophe and explaining her company’s Vision 2020 idea to make it 100 percent sustainable.

Jay Schottenstein is ceo of American Eagle Outfitters, the $4 billion global business that has 1,000 stores and a $1 billion digital business. On Monday, the company celebrated the 25th anniversary of its initial public offering on Wall Street. The company has had 16 straight quarters of comparable sales gains, with Aerie reporting double-digit increases.

Schottenstein said he asked his son what he thinks the most challenging thing was to be successful. His son replied that it was to make people care. “We have a group of leaders who care and believe in the brand,” said Schottenstein. Today, Schottenstein said American Eagle is the number-one denim brand among people 15 to 25 years old in the U.S. “And for women’s denim, we’re number one,” he said. “Our goal over the next few years is to be number one, period, in denim in the U.S.”

Finally, Ash, ceo of United Legwear & Apparel, which has given away more than four million pair of socks, accepted his award as Person of the Year. “I’m absolutely besides myself for being on the stage tonight,” he said. He recalled that 20 years ago he never would have thought it would be possible.

“Making money and giving back is a necessary part of being a successful company,” he said.

In 2016, he partnered with Delivering Good and started an annual one million pairs of socks initiative throughout the industry. “Socks are the number-one-requested item in homeless shelters,” he said. When he looked at the numbers and saw that they’ve only collected 19,000 pairs of socks through April 15, he decided Monday to donate 500,000 pairs of socks to get closer to the initiative’s one-million-pair goal.