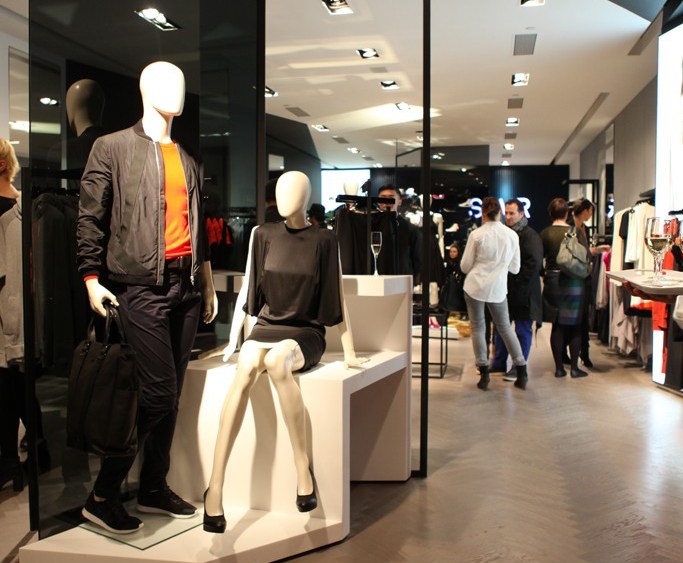 Adidas joined the New York Fashion Week fray by staging the first runway show for Neo, its Selena Gomez-styled label for teens, and unveiling a cool, silver and gray retail prototype for its SLVR sportswear collection.

Although it’s relatively small, even for SoHo, the 1,200-square-foot SLVR shop at 108 Wooster Street has a lot to it. “We were asked to create a space with transparency and clean lines and also with surprises and discovery,” said Ted Mager, head of global retail environments for Adidas.

The shop is designed with different niches for apparel and footwear, men’s and women’s, and 14-foot-tall, floor-to-ceiling backlit graphics and glass fixtures. One side of the glass is clear for a glimpse of what’s displayed just behind; the other side of the glass is reflective. Silver tones are used throughout, to suggest the SLVR name. SLVR has just one other store in the U.S., in Miami, which will be redesigned to the prototype. There are also two stores in Europe, in Berlin and Paris, and five to 10 stores going up in Asia will also reflect the prototype.

The Neo show was as one might expect — casual, fun, with spirited bright colors, tight printed pants, big stripes and Neo logos, all modeled by teens in colored high tops and lots of nail polish and flashy eye shadow. The show was held on West 37th Street and curated by teen bloggers, who were flown into New York.

What wasn’t expected was a brief interruption by two protestors from the United Students Against Sweatshops who claim Adidas owes 2,800 workers in Indonesia $1.8 million in severance from a factory outside Jakarta that was abandoned by the owner and closed. The protesters were quickly whisked outside by security, where a peaceful protest was going on with two of the Indonesian workers. Organizers said dozens more protests against Adidas will be staged at college campuses where Adidas product is sold. A second protest was held at the Adidas Y-3 show Sunday afternoon.

In response to the protests, Adidas issued a lengthy statement, which read in part: “The central fact remains that the PT Kizone factory was unethically closed and abandoned by its owner, not by the Adidas Group, and this occurred more than six months after we placed our last order with them….We honored all terms of our contract, paying the factory owners every penny owed. In turn, we cannot assume, or accept, the liability for the severance owed by the former owner of PT Kizone who violated Indonesian law and fled.”

Adidas added that it cared deeply about the workers, gave $525,000 in aid to them and their families, provided job placement services, encouraged suppliers to hire the workers and got more than 1,000 of the workers new employment.