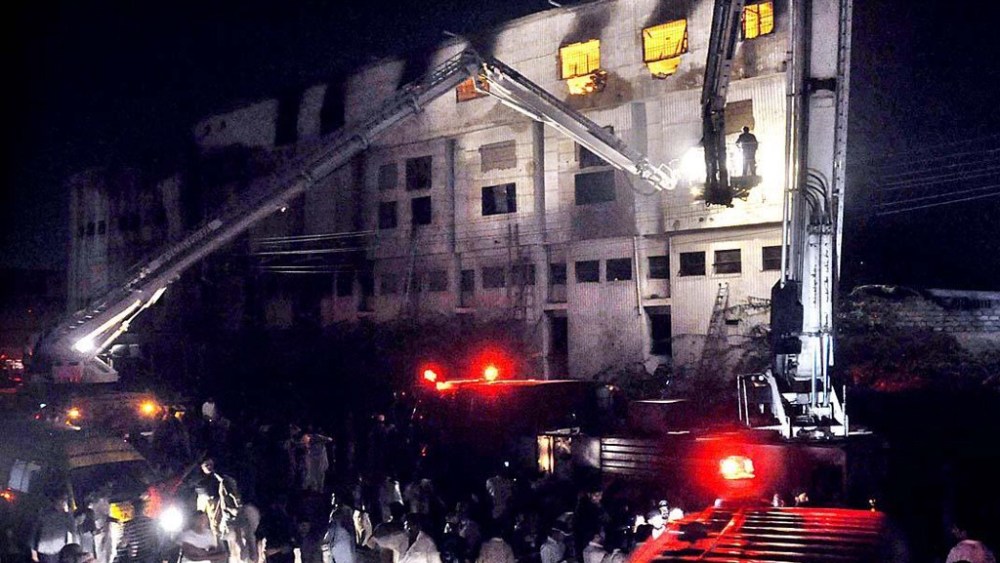 Even as the fashion industry has made major strides in corporate social responsibility over the last two decades, the tragic factory fire in Pakistan last month shows the sector still has a long way to go.

The fire in Karachi, which killed 300 people, also shows that, as the industry rushes to find the next low-cost producer after China, companies almost have to start all over again in ensuring compliance with CSR issues such as safety, workers’ rights and environmental issues in countries like Pakistan, Bangladesh, Cambodia, Vietnam, and in areas in Central America.

Even labor-rights groups acknowledge that progress has been made by some of the industry’s leading corporate players. Child labor, although still in existence in several countries, has been reduced, and awareness and dedication to ensuring that garment workers around the world receive minimum wage and overtime and that manufacturing methods become more sustainable has increased considerably.

But the fire at Ali Enterprises Inc. in Pakistan, which was certified by an independent auditor a month before the blaze, exposed weaknesses in the system.

Timberland began training a compliance team using internal staff in 2005 to conduct audits at its 500 foreign apparel suppliers, in more than 30 countries, because it found many problems with external audits, including falsified records and workers being coached, she said.

“I have a lot of respect and trust in the organizations and the certification process,” she said. “But the Pakistan factory was just an example of how systems can become weak…can become very corrupt. The quality of audits can vary, whether they are internal or external. I choose to believe I know the quality of our own audits better…and that gives me a level of confidence.”

Judy Gearhart, executive director of the International Labor Rights Forum, said, “When you see things like the Pakistani fire happening in a certified facility…there is nothing to show that workers were able to claim their rights or have their voices heard. The bigger issue here is really the ability of workers to speak up.…We have been looking at whether there are robust grievance mechanisms in place at factories and transparent remediation [in CSR programs]. How do you assure freedom of association and collective bargaining rights? All of that goes hand in hand with decent wages.…In the apparel industry, we have not seen an increase in collective bargaining in at least 20 years since the codes of conduct have been in place.”

Apparel brands and retailers are jointly and individually taking extra steps to address the fire safety issues that have plagued factories in Bangladesh and Pakistan, in particular.

“We’ve been reviewing health and safety issues, and fire issues in those countries, as those issues have been highlighted through the recent tragedies,” said Michael Kobori, vice president of social and environmental sustainability at Levi Strauss & Co. “Certainly we will take additional steps with our suppliers in commissioning electrical audits.”

Kobori added that Levi’s plans to conduct the electrical audits at its suppliers in Bangladesh. The brand currently has a total of 450 suppliers in 40 different countries. Levi’s has also joined other industry initiatives to conduct fire and building safety training programs.

“You see a lot of issues coming up in places like Bangladesh, Pakistan, Cambodia, such as fair wages and fair treatment of workers,” said Tanjila Islam, chief executive officer of TigerTrade. “That’s something that big brands and retailers that are already sourcing from those countries are very much aware of, and they are really keeping their fingers on the pulse of what’s happening because it can affect whether they can keep working with those factories or not, or even in that country. You see countries that are still developing their garment industries, like Bangladesh and Cambodia, that are quite competitive in terms of price, but due to labor issues and infrastructure problems, it keeps them on the margins of the true power players of the world.”

Von Haden of Timberland said, “China has developed so much over the years on environmental, labor and health and safety issues. But production is shifting to new developing countries, and the new Chinas are Bangladesh, India and Pakistan and other surrounding countries where we are starting over again with training, education and awareness.”

While fire prevention and safety has been in the forefront of the news recently, problems with child labor also continue in the global apparel industry. In Cambodia, Kobori said there have been some new reports of the use of underage workers in apparel factories and Levi’s is working with the ILO’s Better Factories Cambodia Program to help address the problem.

“I was [in Cambodia] two weeks ago, and we are certainly working with [the ILO] on this issue and working with our compliance teams and suppliers to make sure they understand how to detect underage workers in the recruitment and hiring process,” Kobori added.

Even as fashion companies review their existing CSR programs in the wake of the Pakistan fire, many are embarking on new projects to expand their reach beyond the factory walls, which has been the primary focus for the past 20 years, and will remain a top focus. Companies are also making major inroads into sustainable manufacturing and reducing factories’ impact on the environment.

Levi’s released a white paper in April on one initiative, titled generally “Improving Workers’ Well-Being,” which is an effort to help meet workers’ needs in their personal lives, such as improving health care, vocational training, providing clean water, or establishing financial services and banking to help them with their paychecks.

Levi’s is working with sustainability groups such as Ceres and Business for Social Responsibility to develop the plan and has also convened industry stakeholders, other brands and nongovernmental organizations in the past year to discuss how they can collaborate on improving workers’ lives outside of the factory.

The brand launched a pilot project in five countries — Cambodia, Egypt, Haiti, Bangladesh and Pakistan — in conjunction with local NGOs, where it conducted interviews with workers about their needs. The next step is to share the results with other companies and invite them to join the effort.

“We want to be more of a value add for factories as opposed to the compliance police,” said Von Haden of Timberland, which has worked with Levi’s on the program. “We can work with factories and workers and help them run a better business, have a much higher workforce retention rate and less strikes if they trust us.”

Sustainability, another pillar of CSR programs, is also expanding.

Levi’s recently launched a “Water<Less Jeans” program, and this year included 29 million pairs of jeans in the program for a savings of 360 million liters of water.

Kobori said the company is also involved in a multistakeholder program known as the Better Cotton Initiative that is a holistic approach to making cotton more sustainable and incorporates other brands such as Nike, Adidas, Marks & Spencer and H&M, as well as 100,000 cotton farmers around the world.

Amy Hall, director of social consciousness at Eileen Fisher Inc., speaking at this month’s WWD Global Sourcing Forum, said the company’s motto, “Business as a Movement,” encompasses all aspects of the brand, from fiber choices to environmental and human rights issues to postconsumer product care.

“We want to have a positive affect on people’s lives and bring about social change,” Hall said.

Hall noted that Eileen Fisher began a process a couple of years ago that resulted in its silk factory in China becoming Bluesign certified, the first facility of its kind to do so. The Bluesign standard is based on five principles of sustainability: resource productivity, consumer safety, air emission, water emission and occupational health and safety.

The factory was able to cut chemical usage by 45 percent and water usage by 25 percent. She said the silk-dyeing process now embodies the commitment to create “colors without compromise” using vegetable dyes and other nontoxic materials.