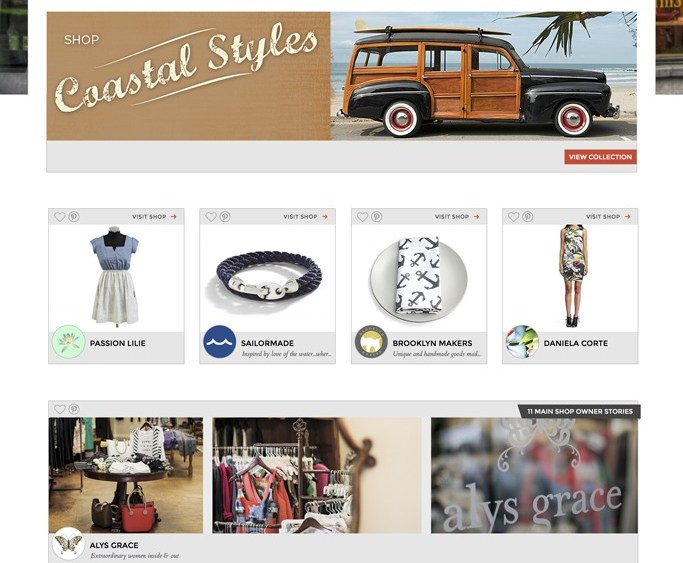 Let the digital turf war begin — the Alibaba Group has arrived in America.

The Chinese Web giant is making its first go at the U.S. consumer with 11 Main, a multicategory e-commerce destination that is launching in consumer beta mode today. The debut precedes Alibaba’s much-anticipated initial public offering on Wall Street later this year and could mark the beginning of a new phase in the East-meets-West battle with the likes of Amazon, Facebook, Google and eBay.

The new site plays to Alibaba’s strengths in matching buyers and sellers — and takes its inspiration from the oldest forms of retail.

“[It’s] inspired by the main street shopping experience and the diversity you have on a main street,” Mike Effle, president and general manager of 11 Main, told WWD. “It’s a hand-selected collection, so we’re picking what we believe are the best shops in fashion and style, and home and outdoors. When we talk to our target customers, they describe themselves as expert shoppers.”

Instead of taking the approach of Amazon or eBay, which this week unveiled an in-season designer destination with brand partners like Calvin Klein, Eli Tahari and Rebecca Minkoff, 11 Main is focused on small businesses and emerging brands. Retailers on the site include Solestruck, a shoe store in Portland, Ore., that sells new and vintage footwear, and Alys Grace, which has three boutiques in the California Bay Area and carries contemporary and designer brands such as Vince, Joie and Diane von Furstenberg. Consumers can shop via boutique or curated collections that are based on seasonal events or trends picked by 11 Main’s merchandising team, based in San Mateo, Calif.

Effle said price range varies by category — with the most expensive item for sale costing $97,000 — but the majority of product sells for under $100.

During a demo of the soon-to-be-launched marketplace, Effle pointed out that categories on the site span fashion, home, jewelry, baby, collecting, tech, sporting goods, toys and entertainment (they are placed on the navigation bar at the top of the screen in this order). He said that the focus moves from left to right, putting the emphasis on fashion, followed by home and jewelry.

Right now, the site is invitation-only for consumers (who can request an invite to the site) and participating retailers and brands. Thousands of shops and brands have applied for inclusion within 11 Main, but only between 1,000 and 2,000 have been accepted so far. Effle said the site will carry about 500,000 products at launch.

Asked when and if 11 Main will partner with larger, designer brands, Effle said: “We always want a broad array of product. As we learn more, if our shopper’s journey is looking for a certain set of products, we’ll work with them directly if they request that. We’re mainly focused on the quality of merchants and the experience.”

He said 11 Main has considered working with larger retailers — the company has received requests from merchants of all sizes — but right now, independent brands and boutiques are the foundation of 11 Main.

Effle said there are “definitely shops targeted towards that luxury consumer.”

“Think of the diversity of main street — of a luxury shop sitting near a vintage shop [that’s] near a collectibles shop. [That’s] the community that main street has provided for a long time in the U.S.,” Effle said. “We’re all a little different in our styles but we often have those pieces that we’ve coveted paired with things [that are] more everyday. That is what we aspire to have available.”

Seattle-based Erin Jane Designs, created by Erin Staples, is an example. The 36-year-old designer, who launched her line in 2006, currently does the majority of her business on Etsy.com (save for a small account with gift-geared online marketplace UncommonGoods).

Last year, her line — which ranges in price from about $30 for a pair of simple, sterling silver studs to $1,500 for an engagement ring fashioned from natural, rough diamonds and recycled silver and gold — made about $65,000 in retail sales. Her sweet spot is $250, especially rings with stones like Colombian emeralds, Chrysoprase, aquamarine and rubies set in gold.

Through her partnership with 11 Main, Staples hopes to double her sales by the end of this year.

“I did the usual, tried wholesale accounts and consignment and craft shows,” said Staples, who struggled to get her business off the ground until starting an Etsy shop in 2009. “That was a turnaround for me and a really good thing for my business. I quickly learned that online was a good fit for me.”

She closed her wholesale accounts soon after and continued to only sell online.

In China, Alibaba’s combined properties — traffic drivers that include e-commerce and social media entities as well as payment solution AliPay — command 80 percent of the e-commerce market. The company, which is led by executive chairman Jack Ma, turned a profit of $3.6 billion on revenues of $8 billion last year.

Of the businesses Alibaba owns, 11 Main can be most closely compared to its business-to-consumer site Tmall.com in China. The online mall provides businesses with a platform to maintain a branded marketplace online and sells more than 70,000 international and Chinese brands from more than 50,000 merchants. In April, Burberry became the first luxury brand to offer an official store on Tmall.com. Tmall owns no inventory — just like 11 Main — and is simply a conduit linking buyers and sellers.

Effle maintained that both platforms are collections of shops and brands that are “committed to keeping the cost of doing business low.”

Perhaps the most significant difference between Tmall and 11 Main is that the latter was created by and for the American consumer, while Tmall is tailored to the Chinese shopper.

With heated competition in the online space, the executive said that creating a compelling experience for the consumer is what will fuel 11 Main’s growth in a crowded e-commerce market. Effle said 11 Main is seeking to stand out by virtue of its “shopping experience.”

In addition to hand-selected shops, every item on the site is Pinterest enabled. 11 Main has integrated the Rich Pins product into its site. This means that when a user comes across a pin of a product that happens to be sold on 11main.com, it will contain product and pricing information and direct a user to a point of purchase.

“The experience at 11 Main is very visual — we share that in common with Pinterest,” Effle said. “[There is an] overlap of the demographic of shopping enthusiasts at Pinterest with our target consumer as well.”