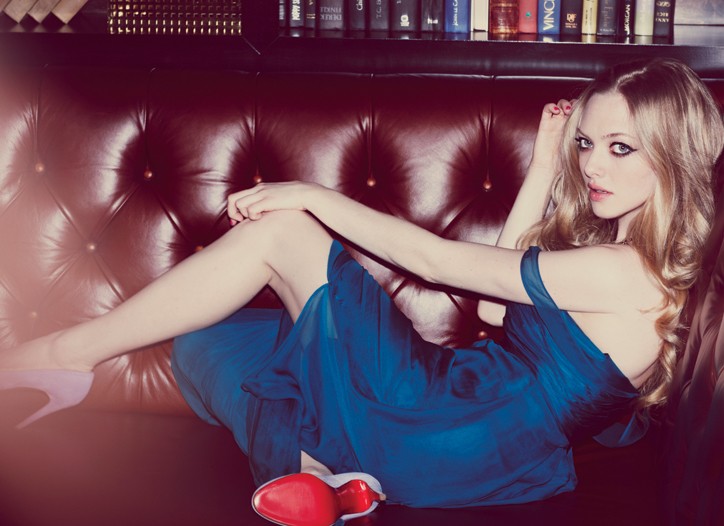 Amanda Seyfried isn’t one to let good looks get in the way of a great career.

On the face of things, the actress has everything it takes to succeed in Hollywood. Blonde hair, blue eyes and big boobs—all completely natural and unmodified by human hand, thank you very much. (Granted, her enviably long blonde hair was dyed for a role about four years ago, but it’s long since grown out.) Equally as unusual, though, is her resolute determination to get to the top on talent alone.

“My agent, manager and I went against the grain, choosing not to play the 18-year-old hot blonde chick who’s not that smart,” Seyfried says. “I could have kept doing those roles, but I didn’t. Cool opportunities came up and I took them instead of shying away from them.”

The cool opportunities to which she refers include playing the deliciously dim-witted and hilariously funny Karen in Mean Girls with Lindsay Lohan, appearing alongside Justin Timberlake in Alpha Dog, accepting a recurring role in the HBO hit series Big Love and winning the lead last year in the film version of Mamma Mia! opposite Meryl Streep. Though the movie was widely panned, Seyfried’s performance, in which she sang as well as acted, was universally praised. She assumed instant “It” girl status, appearing on the cover of Vanity Fair’s Hollywood issue and on the red carpet circuit, culminating in an Oscar performance alongside host Hugh Jackman and Beyoncé in which she displayed her singing and dancing chops.

Seyfried’s talent was immediately obvious to Mamma Mia! director Phyllida Lloyd, who says she knew within the first four bars of Seyfried’s audition that she was the right choice. “We knew we were in the presence of something special,” says Lloyd. “Amanda has an incredible musicality and singing gift. She also has an openness and warmth. She doesn’t come with any brattish Hollywood babe behavior. You feel like she doesn’t spend that much time looking in the mirror.

“There’s an earthiness, which when you first see her, you don’t expect,” Lloyd continues. “You think she’s going to be much more of a delicate flower.”

A workaholic who hates being idle (“My mind is clearest when I’m working.”), Seyfried will next be seen in Jennifer’s Body, written by Oscar-winning screenwriter Diablo Cody and due out Sept. 18, to be followed by the Lasse Halström-directed Dear John next February and Chloe, which she is currently filming in Toronto and in which she stars opposite Liam Neeson and Julianne Moore.

It’s a stellar lineup and it’s exactly where the 23-year-old wants to be. When asked how she’d like to see her career evolve, Seyfried’s response is instant— and frank. “I’m there!” she says. “That’s where I want to be and I’m there. I want it to evolve in a way that people don’t forget about me,” she continues, going on to display the insecurity of every actress in Tinseltown. “I keep working because I’m always so afraid I’m on my last job, which is crazy because there are enough jobs for all of the young actors around. There are so many opportunities. It’s pressure, too, but nobody makes it hard on me. I make it hard on myself.”

To that end, she deliberately chooses roles that are a stretch, such as Chloe, in which she plays a prostitute hired by Moore’s character to seduce her husband. “The movie was supposed to shoot a year ago and it went away and I ended up doing something else. I wanted [the film] to go away and stay away because I was really afraid of it,” she says. “I wanted to do it really badly and it upset me to think it might disappear forever, but at the same time, it was kind of relieving because it’s really hard. But now, I can’t believe I did it. I did it!”

That stream of consciousness is typical of Seyfried, who often starts on one tangent and ends up on another. Her self-doubt belies a keen intelligence and dry sense of humor combined with a self-confessed tendency towards the dramatic. When speaking of her decision not to pursue a solo career as a singer, for example, Seyfried— who plays the piano and guitar and is currently learning the viola— bemoans her song-writing ability. “I’m blown away by the way some people can write music. I really wish I could do that, be that songwriter, but I’m not. I wish I could be Cat Power but I’m not and I never will be,” she says. “I’m not going to try to take that from her.” She sighs heavily. “It’s so frustrating.”

Though tiny, she packs a punch when she talks, gesturing excitedly, gazing off to gather her thoughts, smacking one fist into another, her voice rising and falling with excitement and emphasis. A native of Allentown, Pa., Seyfried currently lives in Los Angeles, where she’s opted for a lowish-key life. “Living in L.A. can go either way,” she says. “It can be all about what you’re wearing, who you’re seen with and where you can go to be photographed, which I find pretty unfortunate,” she says, “OR it can be about finding the right places, where you can carve out your own life.”

When it comes to fashion and beauty, Seyfried professes to be so low maintenance as to be no maintenance. Of her hair, she uses shampoo and conditioner and combs it in the shower; of makeup, Maybelline mascara is her only must-have. Dig a little deeper, though, and she clearly knows her beauty stuff, not surprising for someone who’s been modeling and acting since the age of 11. She’s a devoted fan of Epicuren skin care, ditto Tarte’s Four Day Lash Stain. “If you want to go swimming and wear mascara, get this,” she says. “It really stays and it goes on beautifully.”

In terms of fashion, Seyfried claims to be equally as uninterested. Gesturing to her flannel shirt, faded jeans and brown suede Ugg boots, she defines her everyday style as “comfortable” and her red carpet style as “styled by somebody else.” That philosophy has led to some hits, as with her Stella McCartney gown at the Golden Globes, and some misses, like her fire engine red Valentino at the Oscars.

No matter. Seyfried would rather be known for her work ethic than her sense of style. To that end, the list of qualities she considers key to achieving success as an actress is a lengthy one. “Humility. You’ve GOT to be OK with making fun of yourself. Got to be OK with awkward situations. You’ve gotta enjoy the humor of it all because it’s impossible to get through it if you’re going to be a serious Sally,” she ticks off. “Never care about what you look like. Be on time. Never be late. Ever. People know they can rely on me and that’s important because if they can’t, they don’t want to hire you.

“Oh, and don’t do drugs,” she adds. “Or drink too much. In moderation, drinking  is OK, but drugs are not good at all. Those are my big rules.”

Lloyd thinks that if Seyfried stays on the right track, her potential is boundless. “If she meets the right people and makes the right choices, her career could be huge,” she says. “There is something fearless about Amanda, which makes her wonderful to work with.”