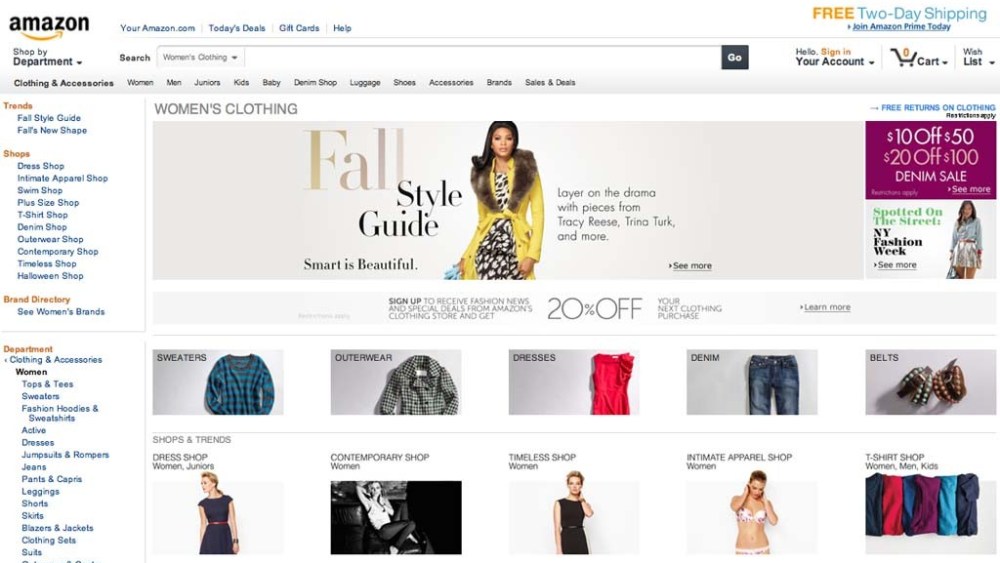 All the madcap activity surrounding the sexy world of social media is masking what really pays the bills: e-commerce.

E-commerce is the only metric brands and retailers have to measure success in the digital world and, while they’re not forgetting about social media, enhancing the online shopping experience is becoming paramount.

And just as there are trendsetters in fashion, so there are in the online world — and none more so than Amazon.com, which wields the greatest power in e-commerce and is setting the pace for how fast other retailers must evolve to keep up.

“[Amazon is] just revolutionizing retail. I don’t think any other adjective or any other verb would suffice. They are changing the way every retailer on the planet is thinking about retailing, and if they aren’t, they should be thinking about it differently because of Amazon,” Nomura Equity Research analyst Aram Rubinson told WWD.

The “the big-box e-tailer” as she calls it commands 37 percent of domestic mobile commerce (also the quickest-growing commerce channel), and she credits the unveiling of Amazon Prime in 2005 (a membership program with a $79 flat rate that offers free two-day shipping on eligible purchases and unlimited live-streaming on thousands of movies and TV shows) as one of the biggest innovations in the space in the past 15 years.

Brian Nowak, another analyst at Nomura Equity Research, calls Prime a significant top-line and gross merchandise value driver, even if the program’s profitability remains unclear. Despite this, Prime has managed to alter consumers’ online purchasing habits, effectively removing the elements that physical stores capitalize on, such as no shipping or return fees and immediacy.

While Amazon is impacting e-commerce across the board, its influence in the fashion sphere may be less significant. Even so, fashion and luxury retailers are rushing to update, or launch, sites. The latest best practices in online commerce include such attributes as:

• Loyalty programs to reward the best customers, modeled on the airlines’ programs.

• Fulfilling orders from their brick-and-mortar stores as well as from central warehouses.

In many of these categories, specialized fashion retailers might have an edge over Amazon. “When you think of retailers with a serious threat — this happens when Amazon can sell exactly what they sell for better and cheaper,” Rubinson said, citing that e-commerce experiences at the digital flagships of brands like Ralph Lauren, Coach or Michael Kors can’t be replicated. “Amazon can’t sell that product as well as they can.”

For him, the only benefit of a consumer purchasing a fashion item on Amazon is the easy shipping and return element. If companies are able to offer rich, brand-centric online destinations, the consumer will most likely opt to order directly from the company’s Web site, not a third-party retailer.

By year’s end, Amazon will have built 18 distribution centers, following a combined 30 that were built from 2010 to 2011, according to Nowak, who points out that an interesting pattern is happening — namely that these locations are getting closer and closer to major metro areas and city centers. He thinks it’s “very possible” that same-day delivery is in the works.

While she declined to comment on whether the rumors about same-day shipping options are true, Cathy Beaudoin, president of Amazon Fashion (also the parent company of MyHabit and Shopbop), believes free shipping is just a piece of the site’s efforts to deliver the optimal consumer experience.

“We think about our proposition to customers from end to end. So free shipping is one important element of our service proposition, but we think about everything from assortment to presentation, to editorial and content on the site — and the fact that our services are fast and reliable, and we’re always there to back up our customers should there be a problem,” Beaudoin said.

In some cases, she contends, free returns are more important than free shipping. The site offers free returns across its soft-line business, Shopbop and flash-sale format MyHabit — because the company thinks it’s important that shoppers have the ability to try on a product, as well as make it easy and free to get it back to Amazon.

It remains to be seen when — or even if — Amazon will unveil a same-day delivery option, but as it stands, Net-a-porter is one of the few fashion sites that already provides the service.

The pure-play e-tailer offers Premier Day or Premier Evening shipping — which for $25 extra allows same-day delivery during an allocated two-hour delivery window of the shopper’s choosing. The program was introduced in London upon Net-a-porter’s launch in 2000 and in New York City in 2006, and the site just expanded the service to parts of Westchester and New Jersey.

But perhaps it’s the automobile category — especially BMW, Audi and Mercedes-Benz — where the retail and fashion categories should look to in terms of e-commerce execution, according to Mullen. The amount of people who test-drive cars prior to purchase has plummeted by 50 percent since 2007, and she credits this to the premium content experience and the ability to go through the entire purchase process through manufacturers’ sites. She compares Burberry’s digital flagship to automobile sites, likening its build-your-own Burberry Bespoke program to customizing and ordering a car online.

Elsewhere in the fashion industry, she believes two of the strongest e-commerce Web sites belong to Ralph Lauren and Tiffany & Co. She calls Coach’s focus on e-commerce “maniacal,” and praises how the company has merged the digital and vertical retail shopping experiences. J. Crew is another retailer that has developed a strong direct business online, even as it has been noticeably slower with investments regarding social platforms.

On the other hand, Dior and Chanel — each with immense followings on Facebook (Dior is just shy of 10 million fans and Chanel has just over seven million) — have yet to launch e-commerce for their fashion businesses.

On the whole, retailers and brands across the spectrum are increasingly paying heed to their e-commerce destinations.

Independent contemporary fashion retailer Intermix relaunched its Web site on Friday in order to compete with large national department stores with a slew of new features. Intermixonline.com now has access to inventory in each of its 30 doors (in addition to the distribution center), with orders being routed to the door with the slowest sell-through of a stockkeeping unit to allow the retailer to reduce markdowns and transfers. Intermix also increased its distribution center significantly and expanded call-center hours and the ability to more easily return online purchases in-store.

“We’re focusing on making that emotional connection — with big beautiful images and less focus on product description. When you’re at a store, it’s the image that’s really important, so we want to put out the biggest, brightest, best images to really make that connection,” said Intermix vice president of e-commerce Jeremy Levine.

He projects the site will constitute 7 to 8 percent of the retailer’s revenues in the first two years and expects this number to climb into the low double digits in the next three to five years. For the moment, the company’s e-commerce site remains the top marketing priority, but Levine said social media falls within this parameter. Merchandise is added to the site daily — up from about three times per week previously — and editorial content will be updated about three to four times a week.

Fine jeweler Chopard also has dived into online commerce, something few of its peers do. Chopard unveiled its first e-commerce-enabled site in the U.S. last week.

“Our long-term objective is for the e-boutique to become a vital business to Chopard by reaching a customer base our current retail boutiques and wholesale partners cannot due to geographic limitations,” the firm’s chief executive officer and president Marc Hruschka said.

The majority of the brand’s current collections will be carried on chopard.com, with the exception of high jewelry and diamond watches. Hruschka said a price threshold as to what’s shoppable online was set at $50,000 (although items costing more will still be showcased with imagery and product information).

He is confident that e-commerce sales will constitute between 10 and 15 percent of Chopard’s overall U.S. business in 2013, and he hopes this number will eventually reach 20 percent.

Several retailers have bulked up their online capabilities this past year, especially Nordstrom, Saks Fifth Avenue and Shopbop.

Nordstrom in February revealed a commitment to upping spend around technology and e-commerce by 40 percent, while Saks Inc. hosted a ribbon-cutting ceremony for a newly owned and operated distribution and fulfillment center in La Vergne, Tenn., on Aug. 31.

Mullen believes that Saks’ investment in video merchandising last year — where customers can view the product on a model walking down a runway (in addition to alternative views with zoom capabilities) — has set the retailer apart from competitors like Bergdorf Goodman, which doesn’t have the capability and has placed much of its digital energies on social media.

Upon its relaunch on Aug. 31, Shopbop also introduced video content, as well as enhanced zoom capabilities with a more streamlined interface altogether. Of the new Shopbop, Mullen said it possesses all of the “operational promises” that Amazon does — from its efficient shipping options to access to Amazon’s extensive “data mining” — except it’s selling more aspirational brands. “Shopbop can effectively use all of the Amazon infrastructure to sell fashion brands much more efficiently. This is one more area where they [Amazon] are putting huge pressure on the industry,” Mullen said.

Despite that, fashion brands are actually outpacing the growth of Amazon — albeit from a significantly smaller base. Mullen cites a 90 percent increase in Tory Burch’s revenues from e-commerce between Feb. 1, 2011, and Dec. 31, 2011.

Amid the speculation that Amazon plans to implement same-day delivery options, Mullen believes other retailers with large online presences might be scrambling to do the same. This means that Macy’s might soon be able to fulfill an online purchase out of any of its stores nationwide within large metro areas. “This will allow them to begin to compete with Amazon in terms of that immediacy,” Mullen said.

On this topic, Macy’s Inc. chief marketing officer Martine Reardon said same-day shipping is something macys.com is always “looking at” and thinking about, but she declined to reveal more. At the moment, Reardon said free shipping is a powerful currency welcomed by the consumer (the retailer offers complementary shipping for spending a certain amount), but she points to product reviews as especially powerful in promoting online sales because they can help shoppers make decisions and promote to peer-to-peer validation.