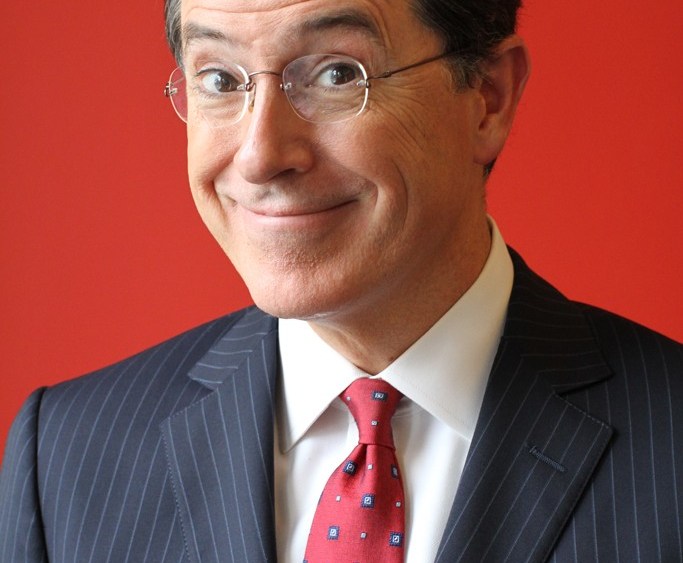 Every weekday night, Stephen Colbert dons a Brooks Brothers suit and tie for his Comedy Central show, “The Colbert Report.” The brand, which makes much of its clothing in the U.S., is a good fit for Colbert’s satirical character, a self-important, right-wing political pundit. The specialty retailer has dressed the comedian for the show since 2006, and even created a camouflage version of its Fitzgerald suit for Colbert’s 2009 USO tour in Iraq.

On Friday, Brooks Bros. hosted a book launch party at its Madison Avenue flagship for Colbert’s new tome, “America Again: Re-Becoming the Greatness We Never Weren’t” (Grand Central Publishing; $28.99). In the liberally illustrated book, Colbert and his team of writers riff on all of this year’s hot-button election issues, from Obamacare and Citizens United to hydraulic fracking and corn subsidies.

Among those at the Brooks Bros. fete were Arianna Huffington, Monika Chiang, Dan Abrams, David Zinczenko and Lisa Birnbach, who noshed on all-American snacks like mini chicken pot pies, macaroni-and-cheese bites, apple pie and chocolate-chip cookies. Colbert toasted the attendees at one point from atop a prop vintage suitcase.

During a frenzied book-promotion schedule that included appearances on the “Late Show With David Letterman,” “Good Morning America,” NPR’s “Fresh Air” and “Oprah’s Next Chapter,” Colbert chatted with WWD about Mitt Romney’s hair, Rachel Maddow’s bust and his take on Dior versus Saint Laurent.

WWD: What inspired you to write this book?
Stephen Colbert: I play a conservative pundit on TV, and you cannot be a conservative pundit unless you have a book full of your opinions out every few years. I just have too many opinions in my mouth to have them all taken up by the TV screen. I wanted to write about the themes of this year’s Republican campaign, like American exceptionalism — how this country is perfect and why we have to fix it.

WWD: What exactly does the title of the book mean?
S.C.: This country has taken some licks over the last four years, and it’s time to be American again. But I don’t want to imply that we haven’t always been great. America always has been great, always will be great. It’s just right now it’s screwed up, and we have to fix it. That’s been the theme of conservative literature over the last two years. This is my version of the same thing, like Newt Gingrich’s “A Nation Like No Other” or Mitt Romney’s “No Apology.”

WWD: Are you trying to get across anything serious in the book?
S.C.: Hell no!

WWD: You worked together with a pretty big group of writers and editors on the book. What’s that process like?
S.C.: It’s like writing the show. We write the show on more daily topical issues, but we’re writing it in collaboration. We discuss the stories and the political and social ideas we want to talk about, and then we basically improvise for each other. We take notes based on the improvisations and figure out where the joke is or where the story is. It’s all written from the point of view of the character I play on “The Colbert Report.” We improvise monologues from him on a topic like Obamacare and synthesize that into a chapter on our failing health-care system. We write every day and every weekend and every vacation for a year, to try to crank it out. We do 160 shows a year, and this book is like doing an extra 50.

WWD: What’s your take on the election so far, and how it’s going for each candidate?
S.C.: As someone who plays a conservative pundit, I couldn’t be happier that Mitt finally got his ducks in a row and got some points up on the board. But I’m not a prognosticator, and I have no opinion on whether either man is going to win. But up until the last debate, I had never seen a campaign as bad as Mitt’s. Even in 2008, when John McCain sort of fell apart post-Lehman Brothers and the debt crisis, people still liked him. People don’t like Mitt that much. The thing about his success in the debate the other night is that he wasn’t successful by saying all the things he’s been saying in the past two years. People who didn’t like him before may like more of what he’s saying, but I don’t know that they are going to trust him. The people who do trust him clearly can’t believe what he’s saying, because they trusted him for all the things he was saying that were the opposite of what he said in the debate. It’s a tough position. I don’t know how long he can stay Mr. Moderate.

WWD: Any advice for the two candidates?
S.C.: Obama maybe should take a Red Bull. Get your head in the game. For Mitt, I would just keep grinning. He’s a very handsome man. He’s got excellent hair. As long as you keep concentrating on the smile and the hair, then you don’t think too much about what he’s saying.

WWD: You actually have pretty good hair yourself. What do you do to take care of it?
S.C.: I’m blessed by my mother’s side of the family in having thick hair. I don’t do anything special with it. I mean, I don’t wash with a bar of soap, but I wash it with whatever is left over in the shower from my wife and that’s about it.

WWD: You wear Brooks Bros. on your show, and they’re hosting a party for you. How did that come about?
S.C.: I’ve worn Brooks Bros. from the very beginning [of the show]. I just love it, because my character is so super-American, and it’s a quintessentially conservative and very, very traditional American brand.

WWD: Do you like fashion, personally? Do you have any interest in it?
S.C.: I like watching it. I’ve never put the time and cash into wearing anything particularly fashionable, but I can appreciate it. My wife likes it, and I can appreciate high, or what I might call impractical, fashion, in an almost sculptural sense — as something that is aesthetically pleasing or just visually shocking. I mean, I know what a bias cut is. I had to take costume and decor classes because I was a theater major [at Northwestern University], so I know a little bit of the history of fashion and design. But I don’t reach for that page in the newspaper.

WWD: You seem pretty classic and preppie when you’re off set.
S.C.: My default is, “Give me a blue blazer and a pair of khaki pants,” because that’s how I was raised. Nothing ever supplanted it. I flirted with wearing black and having a beard when I was in theater school, but that passed. I went back to my default settings. Somewhere out there is a style for me. Maybe, when I’m older, I’ll be one of those guys who is whip thin and can get away with wearing a straw boater. Only a really thin man can wear a straw hat.

WWD: You had Anna Wintour on your show recently.
S.C.: She was great! We’re supposed to go on a date together. Where were we supposed to go, Cheesecake Factory?

WWD: I think you guys said Long John Silver’s, to lose yourselves in battered shrimp.
S.C.: [Laughs] That’s exactly right. We haven’t gone yet, but I still hope.

WWD: Are there any other fashion people you’d like to have on the show?
S.C.: Hmm, let’s see. I hope I’m pronouncing this right: Monique Lhuillier? [Mangles pronunciation.]

WWD: There’s a company called Alden that makes great shoes in the U.S.
S.C.: I’ve actually been to one of the last handmade-shoe factories in America that uses a curved last. We went for [Jon Stewart’s] “The Daily Show.” They were the last maker of handmade clown shoes in the U.S. — they made a beautiful, high-quality shoe that just happened to have an enormous toe.

WWD: So while most of America is now focused on Obama versus Romney, the big showdown in fashion this season was the debut of Raf Simons at Dior versus the debut of Hedi Slimane at Yves Saint Laurent. Are you more team Dior or team YSL?
S.C.: All of that was like Greek to me. Umm…I’ll go with YSL, because I’m a fan of initials.

WWD: How do you keep up on the news? What do you read and watch?
S.C.: I read The Times. And I read standard conservative and liberal blogs, like Red State for conservatives and The Huffington Post for liberals. I also spend a lot of time on Reddit, which is a social network and aggregator. People vote stories onto the front page, so you can see what people are talking about. I’m blessed with a good memory, so I consume a great deal of information in a short period of time, and my job is to synthesize that into a joke with a meaning.

WWD: Your character is based on cable news anchors.
S.C.: Actually, it’s based on pundits. Anchors give you information, but pundits give you their opinions.

WWD: So do you watch a lot of the cable pundit shows?
S.C.: I used to watch them a lot, but not anymore, because they are corrosive to the soul.

WWD: If I go through a list of cable news personalities, can you say the first thing that comes to mind? Anderson Cooper?
S.C.: Shiny.

WWD: Your character is ironic, sarcastic and self-important. Does that take a lot of work or does it come naturally to you?
S.C.: It comes naturally. Once I’m in character, it’s easy for me to improvise what he might say. Figuring out what to care about is the hardest part, not writing the jokes. It’s what do you want to spend the time writing the jokes about.