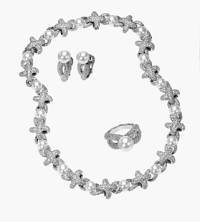 The fine jewelry industry is in the midst of a major evolution. With annual sales estimated at $41 billion in the U.S., an industry that is still dominated by mom-and-pop jewelry shops and small manufacturers is struggling to bring itself into the modern era. New rules on diamonds, an influx of new designers and increased fine jewelry sales at low-price chains such as Sam’s Club and J.C. Penney are just some of the many factors with which the industry is grappling.

In recent interviews with retailers and suppliers throughout the jewelry industry, it’s clear that business is more challenging than ever as 2003 gets going. While jewelry saw flush times throughout much of the Nineties, the tide has shifted. The 2002 holiday season was one of the most grueling in recent memory, with many stores taking heavy markdowns before the season even got well under way.

Although jewelry performed better than many other sectors, including apparel, gems and baubles certainly lacked sparkle for many consumers and economic uncertainties are weighing on consumer spending. Tiffany & Co., for example, saw its comparable-store sales slip 1 percent during the holiday season, causing the retailer to lower its earnings guidance for the year.

Fallout from the all-important holiday season, which accounts for up to 85 percent of sales for some jewelry retailers, will likely be felt for months to come. Stores across the spectrum are keeping their inventories lean and cherry-picking their offerings.

Matt Runci, president and chief executive officer of Jewelers of America, the national trade association for retail jewelers, said, “The biggest challenge currently facing the jewelry industry is dealing with the ongoing atmosphere of economic uncertainty, coupled with unease about the possibility of war. Many consumers are holding back.”

Ken Gassman, a former retail analyst and president of the Jewelry Research Institute, similarly said, “There was huge discounting this holiday season. I expect to see more consolidation this year, especially at the supplier level. Also, the wild card this year is the war with Iraq, which could have an impact.”

Much of the jewelry business remains fragmented, and apart from retailers such as Tiffany and Zale Corp., and brands including David Yurman and Robert Lee Morris, there are few jewelry stores or brands that are well known to consumers. At the same time, some big fashion houses such as Chanel, Christian Dior and Gucci have begun to focus more on their fine jewelry business, adding ever more players to feed off a small pie.

Jim DeMattei, owner of ViewPoint Showroom, which represents a number of fine jewelry brands, said: “There will definitely be more consolidation this year. Many people entered this business during the Nineties and those designers will be challenged to maintain their business.”

But the news is not all bad. One trend that has helped the industry in recent years is the rise of female self-purchasers. While there are now no figures available on the number of women buying jewelry for themselves, anecdotal evidence suggests that this trend is on the rise. Women now marry later, are making more money than before and are not resistant to spending money to buy something significant for themselves.

“I think the amount women have self-purchased has doubled for us in the last 15 years,” said designer Steven Lagos of Lagos, the Philadelphia-based jewelry company.

Some luxury retailers are convinced that this year will see positive business trends, especially in the high-end market. Diamonds were one of the standouts of the holiday season, especially three-stone diamond jewelry, which was promoted heavily by the Diamond Trading Corp., the marketing arm of DeBeers Group.

Alfred Molina, president of Molina Fine Jewelers in Phoenix, which sells many high-end jewelry and watch brands, said, “The high-end market is immune to the so-called market fluctuations. There is no question that Baby Boomers are becoming more affluent and are spending, which bodes well for jewelry. They don’t want to save their money for a rainy day.”

Another trend that has had a profound impact on the business in recent years is the rise of the designer jeweler and the move toward branded jewelry and designer names. Designers such as David Yurman, Stephen Lagos and John Hardy have become well-known names, and retail shelves are now brimming with products from designers such as Paul Morelli, Laura Munder, Stephen Webster and Tamara Comolli.

Diamonds are also getting branded, a move fueled by the DTC. Diamond suppliers such as Lazare Kaplan International, Codiam Inc., Kwiat and Schachter & Namdar have introduced branded diamonds, each pushing their own distinctive cut and style.

Heading into the new year, the trends are still focused on colored gems, including stones such as lapis, coral, citrine and chalcedony, as well as mother-of-pearl. Yellow gold has also continued to gain in popularity.

Lagos said he “has been very into gemstones,” including amethyst, citrine and garnet.

Fine jewelry has also become a hot category at mass market and national chains. From Wal-Mart to J.C. Penney, stores that are not traditionally known for high-quality jewelry are luring customers and there is less price resistance from shoppers to buying big-name gems at low-end stores. Sam’s Club, for example, has advertised its diamond jewelry in upscale magazines such as Town & Country.

“The discount channel is definitely becoming more important,” said Gassman. “It’s hard to believe someone would bring home a diamond engagement ring in a Wal-Mart box, but a lot of people do. And margins at discount stores are above the average store margins.”

Watches have provided another bright spot for many stores and the category is seeing many new players. The watch arena has benefited from the trend in recent years of watch wardrobing, where people buy a number of watches to suit their various activities.

Watches have seen an influx of new players, many from the designer arena. Prada, Louis Vuitton, Burberry, Yves Saint Laurent and Hermès are all stepping up their business in watches, and Italian firms such as Ritmo Mundo, Grimoldi and Locman are also stirring up the pot and increasing their focus on building this business.

Online jewelry sales were particularly robust this holiday season and may be one area poised for more growth. One reason for the increase, this year, according to Gassman, was the anthrax scare last year, which resulted in some people not wanting packages coming to their houses.

The Internet was particularly fertile ground for jewelry companies in the late Nineties, when firms such as Ashford.com, Miadora.com, Adornis.com and Enjewel.com sprung up and caused plenty of ruckus in the jewelry world. By 2000, however, most of these had shuttered and people were soured about the experience of buying online.

Now, it appears that online sales are experiencing something of a renaissance, especially in jewelry. The surviving players are more focused and are creating momentum again.

According to analysts, Blue Nile is a clear market leader in online jewelry. Blue Nile launched in 1999 and is expected to report sales of about $70 million for 2002, according to its chief executive officer, Mark Vadon. Unlike many other jewelry sites, it caters to men, and much of its sales are from custom-made engagement rings.

“Internet sales have been at record levels,” Gassman said. “We have more people who know how to shop on the Web now.”