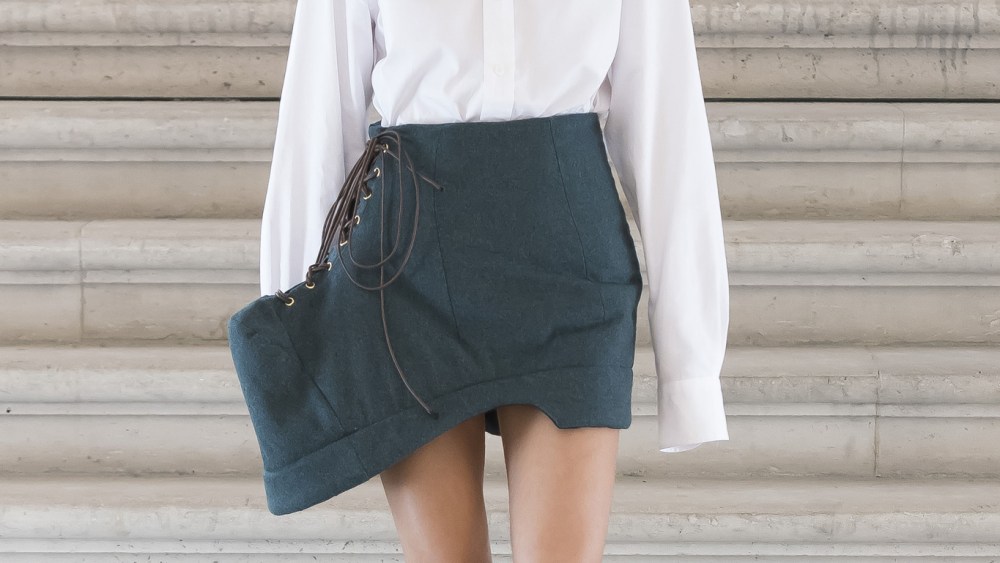 IN WITH THE NEW: Andre Walker is ready for his next act.

The Brooklyn, N.Y.-based designer is collaborating with Off-White on an upcoming capsule collection, and staged a show of archival pieces, titled Non Existant Patterns 2017-20, at Les Arts Décoratifs during Paris Fashion Week.

Based on original designs from 1982 to 1987, held by collectors including Kim Jones, Patricia Field and Kim Hastreiter, the 15 looks were reproduced using Pendleton fabrics. The samples of the collection were available to buy on the day of the show, and the line was also available for wholesale orders.

Walker’s instantly recognizable designs included what he termed a “squid coat” and “fishtail pants” — read kimono coats with oversized sleeves, trousers sprouting back panels and a miniskirt shaped like a shoe, complete with laces running down one side. Best of all were the cream blanket coats with wide green, red and yellow stripes.

“The original garments were cut on the floor freehand,” said the designer, who estimated he produced around 700 garments in his teens, which he sold through Patricia Field’s store.

“It’s really been a long-winded seed of suggestion and eventual persuasion for me to, like, even show these things because number one, I didn’t have any. I don’t have an archive, but the archive exists with the people who have held on to them, which is what’s so great,” he added.

Walker has been a peripatetic presence on the fashion scene since staging his first show at the age of 15 at New York nightclub Oasis. He has worked for WilliWear and Patrick Kelly, and consulted for Kim Jones and Marc Jacobs at Louis Vuitton. In 2000, he was awarded the prestigious ANDAM fashion prize, but later shuttered his label.

Between 2014 and 2016, he produced his And Re Walker collection under the auspices of Comme des Garçons. The brand began collaborating with Walker in 2013 for the opening of Dover Street Market in New York and subsequently supported the label’s distribution to select retailers internationally.

Walker said he was ready to take his business to the next level, though he has yet to determine which form this will take.

Walker, who has always remained something of an outlier, said his vision was inspired by French designers from the Seventies like Anne-Marie Beretta, Popy Moreni, Claude Montana, Elisabeth de Senneville and Thierry Mugler.

His Eighties designs are the product of a specific time and place — hence their appeal to fashion connoisseurs like Jones. Will the modern-day reproductions speak to a wider audience? Walker, at any rate, felt his vision is sometimes hard to defend.

“I’m such a purist and I care so much about beauty and love and gorgeousness that it’s difficult to explain that to people, because so many people now are just into demographics and statistics and data and logarithms. That’s all interesting, but you cannot replace the heart,” he argued.