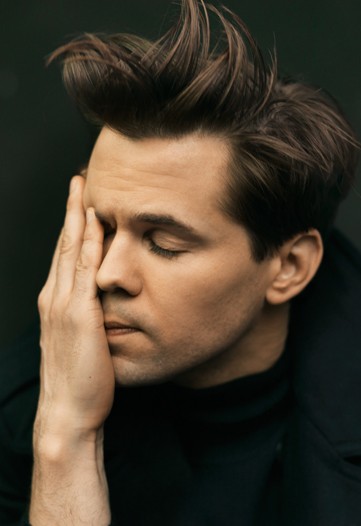 When he was in rehearsals for “The Book of Mormon” last summer, Andrew Rannells decided to get a closer look at the source material, so he made his way to the Latter-day Saints New York visitors’ center to meet some real-life missionaries.

“I wandered in and there’s a security guard, and I said I’m just looking for some general information, and he let me wander,” Rannells says sitting on a couch outside a Meatpacking District photo studio on a sunny April day. “I mean no one stopped me. Maybe because I look Mormon?”

Score one for Trey Parker and Matt Stone, the “South Park” savants and, along with songwriter Robert Lopez, masterminds of “The Book of Mormon,” the most lauded Broadway comedy since “The Producers.” For those who haven’t been able to lay hands on tickets (and good luck with that: it’s currently booked well into summer and the NYPD opened an investigation into counterfeit tickets this week), the show follows two wide-eyed missionaries plucked from suburbia and dropped into a war-torn and AIDS-ravaged Uganda. There, they are tasked with not only convincing villagers that there is a God, but that he revealed his most sacred teachings to a treasure-seeker turned preacher in upstate New York in the 1820s.

As Elder Price, one of the show’s two leads, Rannells, a boyish 32, plays nothing short of the Salt Lake ideal: An all-American kid as sure of his faith as he is of himself. He’s the straight man to co-star Josh Gad’s Elder Cunningham, a schlubby and compulsive ne’er-do-well. Rannells looks the part. He’s tall, but not too-much-so, with a very easy smile and a truly impressive chestnut coif. Originally hailing from Omaha, Rannells’ gracious real-life demeanor doesn’t seem too far off, if a little less cartoonish, from the one he conjures up for the play’s first act, before it all goes to Hell, literally, in the second.

“I got to be funny — and a lot of times you’re not supposed to be,” says Rannells, whose credits include “Hairspray” and “Jersey Boys.” “I’ve certainly played those leading man or male juvenile roles, where you’re not supposed to make people laugh. [The producers] let me sort of explore that and what is funny about that guy and also to make him quirky and weird in his own way.”

Which is to say Bud Abbott never had Holy Scripture forcibly placed where the sun dares not shine by an African warlord whose name is not printable in Men’s Week. In any case, the comic torment seems to be paying off. “The Book of Mormon” is sure to garner its fair share of attention when Tony nominations are announced on May 3. Individual nod or not, Rannells has booked a part on “Girls” the buzzed-about HBO series from “Tiny Furniture” director Lena Dunham.

And as for that trip to the Mormon visitors’ center?

“I have complete respect for what they’re choosing to do, particularly the guys who are stationed in Manhattan because they said, sort of very defeated, ‘Well, the only people who talk to us are homeless people,’” Rannells recalls. “I ended up sort of counseling these two boys about living in Manhattan…I felt like I should take them out to dinner or something.”