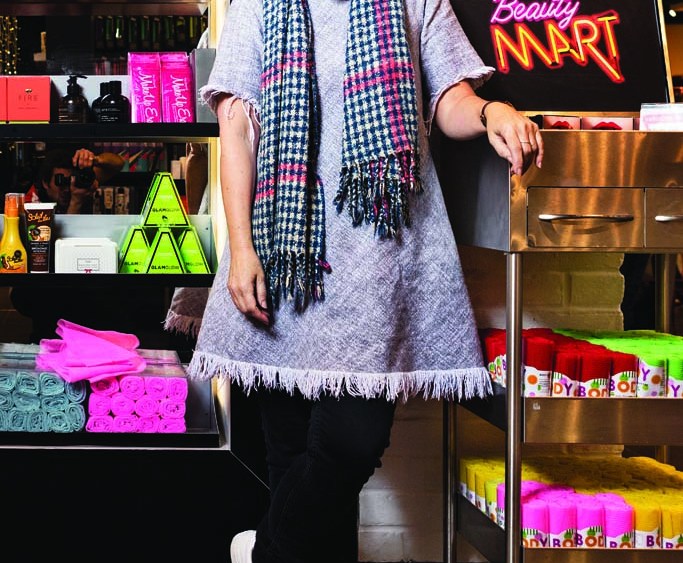 London’s beauty counterculture is resolutely indie in spirit, renegade in attitude. In this town, the mainstream is quick to embrace the alternative: it’s what makes us British. This spirited approach provides myriad choices for beauty consumers, with department stores that celebrate and support outsiders to indie locations that welcome big brands. We call it a mash-up, and it’s what makes London beauty so special. Here, the people and places on my radar screen.

Sharmadean Reid
Proof of Sharmadean Reid’s status is half-a-million Instagram followers and an MBE [Member of the Order of the British Empire] from the Queen for services to the nail and beauty industry. The Central Saint Martins graduate burst out of college in 2008 with a fanzine followed by a pioneering nail art salon, called Wah London, one year later in London’s edgy Dalston district. Vogue named
her one of the “15 people who will define the arts in Britain.” Did I mention her Wah London product range is sold in 250 Boots stores and that plans for 2016 include a global rollout?
Wah-nails.com.

Maxine Leonard
Makeup artist, former beauty director of Wonderland magazine and now newspaper editor and publisher, Leonard is the force behind Beauty Papers, the challenging and intellectual biannual that’s free of the familiar and constraining beauty tropes. It launched this summer with a roster of visionary contributors including hairdresser Christiaan, skin-care editor Nichola Joss, nutrition editor Rosemary Ferguson, designer Bella Freud and model Anja Rubik. “There is nothing more inspiring than beauty when the chains are taken off,” says Leonard.
Beautypapers.com

Florence Adepoju
MDMflow was created by Florence Adepoju, a London College of Fashion cosmetics science alumna with a taste for hip-hop who makes lipsticks in her parents’ shed. But it’s a chic shed and the products that come out of it — golden bullet- shaped lipsticks and mascaras—are garnering rave reviews and global fans. She also operates a mobile Lipstick Lab, visiting beauty editors and anyone else who fancies co-creating their own shades. Bestsellers are Di La La, a renegade vampy black; Mas Marina, a surprisingly flattering cobalt blue, and Milkshake (named for the Kelis track) that gets more pink every time you press your lips together.
MDMflow.com

Barely Cosmetics
Founded by Irish-born, Hollywood-trained Nicole McEvoy, these latex-free skin-care and makeup sponges packaged in neat Ziploc pouches raise the bar in terms of quality and modernity. Barely Cosmetics sponges are used wet so as not to soak up and waste product. Especially clever is the chisel-shaped black Definer Sponge that is great for contouring, eye makeup application and erasing mistakes.
thisisbeautymart.com/brands/barely-cosmetics

Skin and Tonic London
Small-batch skin-care brand Skin and Tonic sources ingredients from all over the world then brings them back to Hackney where they are distilled, processed and made into between 50 and 100 hand-numbered bottles per production. The range is small—just eight stockkeeping units— but perfectly formed. Brit Beauty Oil with omega- rich chia and borage seed oils, plus neroli and vitamin E, is a fave.
Skinandtoniclondon.com

Haeckels
Named after Ernst Haeckel, the German biologist and naturalist, Haeckels is a wunderkammer lined with old packing cases from the Victoria and Albert Museum housing intriguing objets. The Aromaphone dominates the room — it’s a scent trumpet that diffuses fragrance into the air alongside its more diminutive counterpart, the Chalk Room Diffuser, a silky tablet of etched chalk. On the shelves are beauty products made from seaweed harvested from the Kent coast and perfumes with GPS coordinates that will take you to the places that inspired the scents.
106 Shoreditch High St., E1 6JN; haeckels.co.uk

Celestine Eleven
This fashion boutique that’s also a library, apothecary, tea bar and yoga school with beauty rooms feels like it should be in New Mexico rather than Shoreditch. Alongside Brit designers including J. W. Anderson and Meadham Kirchoff, the apothecary dispenses products from Dr Jackson’s, Butter Elixir, Karuna and Jao. Aesthetician-in-residence Nichola Joss is known for her “Inner Facial,” in which the face is massaged from inside the mouth.
4 Holywell Lane, EC2A 3ET; celestineeleven.com

Burlington Arcade
The world’s first-ever shopping arcade, which during Victorian times housed milliners and fancy-goods shops on the ground floor with prostitutes on the upper floors, is in the midst of a revival. Ever since Chanel opened its beauty boutique here, the arcade is fast becoming fragrance central with Penhaligon’s, Frédéric Malle, Roja Dove and By Kilian all taking up residence.
51 Piccadilly, W1J 0QJ; Burlington-arcade.co.uk

Braid Parade
Cornrow, fishtail, undercut, French — braids have taken over from pastel colors as the latest hair trend in London. Pop-up braid bars by Hershesons in Topshop (they were first to do a blow-dry bar), The Braid Bar in Selfridges and Keash Braids in Boxpark are fueling the trend.

The Hole Truth
What started with a few influential magazine editors dropping by Maria Tash’s New York boutique for a little bit of ear decoration in between shows has turned into a cross-pond frenzy for multipiercings. Tash popped up at Josh Wood’s Atelier during London Fashion Week servicing those with a penchant for decorating their tragus, rook, conch, orbital, helix, daith or lobe.

Dark Tidings
London’s more experimental beauty stylists (remember, we did weird hair colors first), have been slicking on vampish lip colors from burgundy to black for a few years now. But suddenly this summer the counterintuitive (for summer) shade went from underground to red carpet, spearheaded by Rihanna. Now, with A/W’s Gothic romance it’s (almost) mainstream.