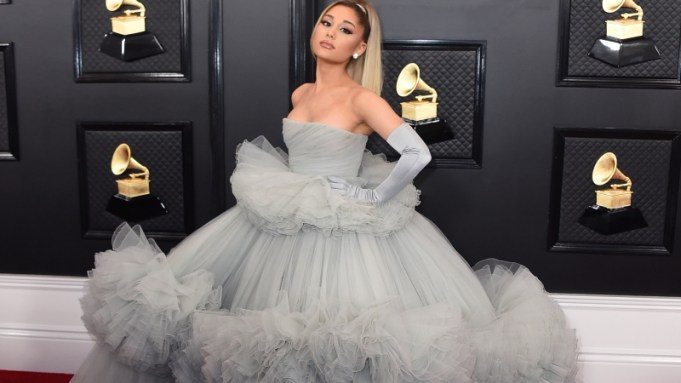 Ariana Grande, one of the most influential celebrities in music, pop culture and fashion, turns 29 on Sunday.

With the help of her stylist Mimi Cuttrell, the award-winning singer has stunned in some of the most memorable fashion looks in the last few years, wearing designs by Versace, Valentino, Mugler and Giambattista Valli for major awards shows, press events and more.

For her first Met Gala in 2018, she opted for Vera Wang, wearing a strapless tulle ballgown featuring an allover print of the Sistine Chapel in Vatican City. It was a nod to the night’s theme of “Heavenly Bodies.” For the coveted gathering, she was styled by Law Roach, who also styles the likes of Zendaya.

One of Grande’s most fashion-forward moments on the red carpet was during the 2020 Grammy Awards, when she wore a custom Giambattista Valli voluminous tulle gown with matching dove gray opera gloves and her signature high ponytail. The look was reminiscent of the Cinderella-inspired Zac Posen dress she was supposed to wear at 2019’s ceremony.

However, in the last few years, Grande has kept a relatively low profile. Though that hasn’t stopped her from making bestselling albums such as “Thank U, Next” and “Positions.”

In 2021, she tied the knot with Dalton Gomez, a Los Angeles-based real estate developer, in an intimate ceremony at the singer’s home in Montecito, California. She looked to Vera Wang once more to design her wedding dress, which was a strapless, form-fitting floor-length gown with an open-back design.

Last year also marked Grande’s foray into makeup, with her brand called R.E.M. Beauty. The line launched its first collection in November. She was also tapped to become a coach for the popular NBC reality singing competition series “The Voice,” though she exited after one season.

Since she stepped on the scene as an actress in Nickelodeon’s “Victorious” alongside Victoria Justice and Elizabeth Gillies, Grande has emerged as one of the most recognizable faces and voices today. She released her first album, “Yours Truly,” in 2013, which was an immediate success with hits such as “The Way,” “Baby I” and “Almost Is Never Enough.”

She went on to release five more bestselling albums, including “My Everything,” “Dangerous Woman,” “Sweetener,” “Thank U, Next” and “Positions.”

Throughout her career, Grande has been nominated for a total of 15 Grammy Awards, winning two — one for Best Duo/Group Performance for her hit song “Rain on Me” with Lady Gaga and one for Best Pop Vocal Album for “Sweetener.”