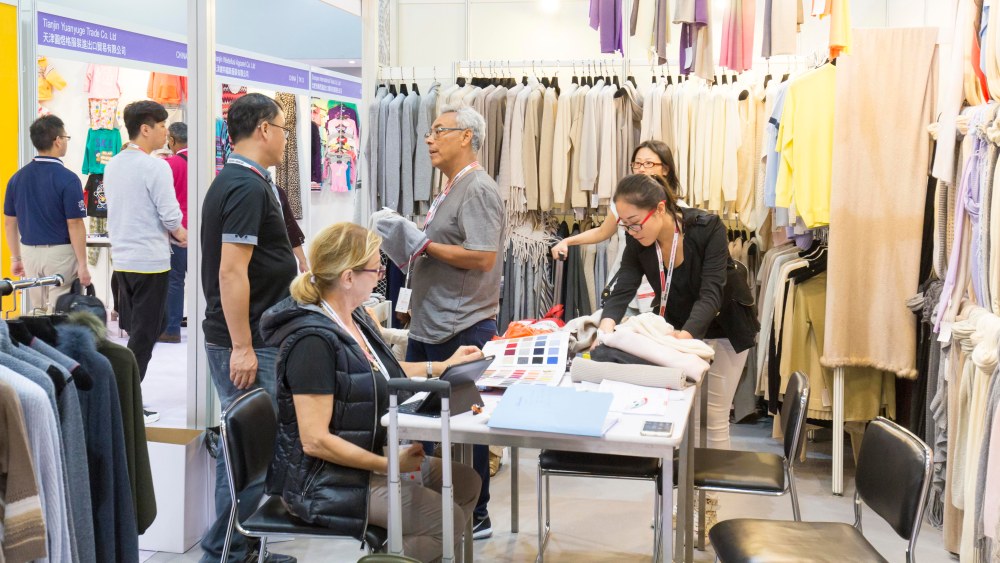 HONG KONG — Rising wage costs in China weighed heavily on exhibitors at the Global Sources Fashion trade show here that ended Friday, as a focus among buyers and sellers was cheaper labor in Vietnam and Myanmar.

A lackluster global economy also saw European buyers shy away from the sourcing show, preferring to rely on representatives from Hong Kong. While pre-registration attendance traffic on the first day was up 2 percent overall compared with the April fair, which drew 12,271 buyers, European buyers were down by 20 percent year-over-year, according to organizers.

Sellers said interest from buyers at the show was sluggish. Edward Jin, general manager of Hangzhou Sunshine Textile Co. Ltd., said it was his third time to showcase his knitted sweaters at the sourcing fair. This time he regretted taking two booths, rather than one. He was not as busy as he would have hoped.

“For us, it’s the worker’s costs — up every year,’’ he said. “The whole economic situation, especially for the European market, is putting a big pressure on price.’’

Given this climate, he said he’ll be scaling back his attendance at trade fairs.

Jessie Hu, a sales representative at Dongguan Yongdian Clothing Co., which makes underwear and swimwear, said business was not as good as previous years. Price pressure from countries such as Vietnam is a key concern.

“Most of our customers are from Europe,” she said. “I think maybe we are losing out to other countries.”

Buyers at Quanzhou KempGear Clothing Co., which manufactures casual sportswear, are typically from Europe or North America, said sales representative Camille Tang. But they are squeezing prices and business is looking tough.

“Quantities are getting a lot less,’’ she said, adding that it was their third time exhibiting and it was not as busy.

Organizers designated a small corner of the exhibition space as an “ASEAN Section,” having invited a handful of trade associations to promote their products. Livia Yip, president of Global Sources Fashion Group, said this reflected demand from buyers to gain exposure to sources in countries such as Vietnam and Myanmar. But it is simply too expensive for suppliers to attend.

“We try to work with these associations to put some clothes from these factories on display,’’ she said. “Next spring we will highlight some of the factories from Vietnam and Myanmar. It’s in response to buyers’ needs. We should give them a chance to work on this.”

The organizer holds the show twice a year, in April and October.

Majmudar Atri, who heads up Arvind Ltd., a fabric company in India, was looking specifically to team with a Vietnamese garment manufacturer at the show.

“Many buyers are looking at manufacturing bases like Vietnam, also Cambodia and Myanmar. The costs in China are increasing, that’s having a major impact,” he said. “It’s not such a lucrative destination.”

Emma Strauss, whose company Mandalay Designs usually buys silk and cashmere in small quantities, said one upside was that it was becoming easier to negotiate with Chinese sellers.

“I think they have lost a lot of business to other countries…but they have been very regimented about their quantities in the past,” Strauss said. “Now they are coming around to being more accommodating to buyers. Before, there was no discussion.”

China may still have an edge over its Asian peers in manufacturing large quantities, said Howard Gaventa of Howard Gaventa Ltd., who sources scarves and belts for retailers such as New Look in the U.K. “Places like Vietnam don’t have the scale for the big retailers.”

Around 50 percent of the buyers were from Hong Kong, Global Sources’ Yip explained, with 30 percent from Europe and North America and 20 percent from other ASEAN countries. For this show, European buyers in particular preferred to use a Hong Kong-based buying office to attend on their behalf. She said buyers from Europe were down 20 percent from last year.

Functional fabrics and fashion technology were among key themes at the event, with pavilions dedicated to 3-D technology and personalized leather printing. Garett Wong, design director at Thingzcube, used a 3-D printer to produce buckles and shoe molds. Quanzhou Kempgear Clothing Co. showcased a rain jacket with heated panels powered by batteries. The next generation jacket due in three months would use a USB to provide the energy.

Echo Liu, a sales representative at Shanghai Yi Yi Import & Export Co. was exhibiting a collection of sportswear that used reflective material that would only become visible in the dark.

Twenty-six exhibitors were from Wujiang in China, which has become a center for functional fabrics.

As a result, the focus was on more individualism, she stressed, and played a part in putting new technology on show, which could make products more personalized, for example by using 3-D printer technology or leather painting.