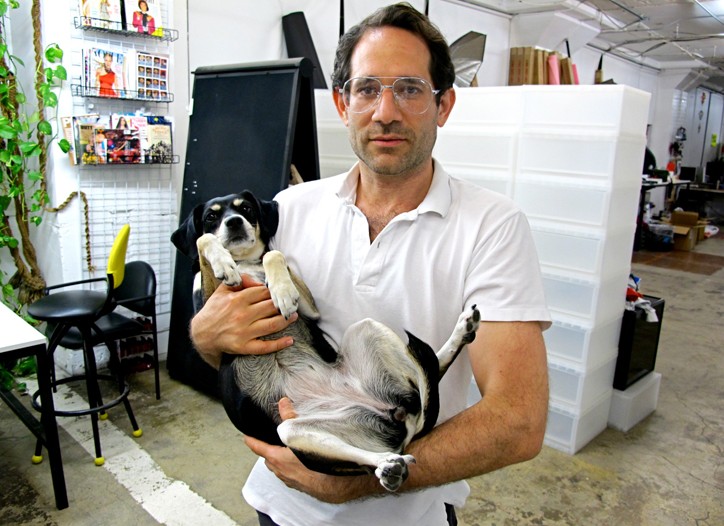 The high-wire act that was Dov Charney as chairman and chief executive officer of American Apparel Inc. met its abrupt — and some believe inevitable — end Wednesday, bringing down one of fashion’s most colorful figures and opening the door for a potential sale of the company he founded.

After a 10-hour marathon meeting behind closed doors in New York, the company’s board said late Wednesday it had replaced Charney as chairman and planned to terminate him as president and ceo for cause in 30 days, citing “an ongoing investigation into alleged misconduct.”

Reached by WWD Thursday, Charney sounded relaxed, but stayed mum: “There’s nothing I have to say right now.”

Competing retailers and industry observers have been predicting his departure or the company’s bankruptcy for years and, until now, Charney had proved them wrong with his resiliency.

Since Charney founded the Los Angeles-based firm as a blank T-shirt maker in 1997, it has been many things: a phenom brand mining Seventies culture and selling it to hipsters; a pot-stirring marketer featuring ads with an amateur-porn vibe; an advocate of immigrants, and the highest-profile domestic apparel producer.

Charney’s reputation, though, is tied more to his libertine attitudes — living with young employees in his L.A. mansion and serving as fit model for the company’s underwear. American Apparel’s ad campaigns also often featured female employees in sexually provocative poses — ads that were conceived by Charney. He was repeatedly sued by employees for sexual harassment, claims that the ceo denied and the company once decried as baseless “shakedown attempts.”

But it seems to have been Charney’s response to the suits that ultimately took him down, or provided American Apparel’s board with the justification it needed to cut him loose.

A source close to the situation said the shake-up was “a culmination of many events” and that Charney had dispatched certain litigation without the board’s knowledge, providing the “straw that broke the camel’s back.”

“When the board looked into certain settlements that were not authorized, it became apparent that some duties could have been breeched by Dov,” the source said, adding that the company’s poor finances and ailing stock price also could have contributed to the move.

Executive vice president and chief financial officer John Luttrell took the reins as interim ceo and said the company would stick with its “sweatshop-free, Made in USA” stance on manufacturing.

Even so, the firm is heavily indebted with a weakened stock price and now has something of a power vacuum at the top.

“The goal is to get a new management team in and run this business,” the source said. “The goal isn’t to sell the company, but obviously in these types of situations you have to examine all of your options.”

Investors were supportive of Charney’s ouster and pushed American Apparel’s stock up 6.7 percent to 68 cents, giving the company a market capitalization of $118.5 million. Nearly 18.5 million shares traded hands, well over the 2.8 million daily average for the past three months.

“We take no joy in this, but the board felt it was the right thing to do,” said Allan Mayer, who was named cochairman along with David Danziger. “Dov Charney created American Apparel, but the company has grown much larger than any one individual and we are confident that its greatest days are still ahead.”

Charney has technically been suspended from his executive roles and his termination will be effective following a 30-day “cure” period stipulated in his employment agreement.

The company said the management change might have triggered a default under its credit agreements and that it will seek a waiver from its lenders. American Apparel said in a regulatory filing that if it can’t get such a waiver, its lenders could accelerate payments required, “which could cause us to become bankrupt or insolvent.”

American Apparel has repeatedly skirted on the edge of a financial precipice as its debt mounted and the terms of the debt became increasingly onerous. In 2009, it reached an agreement with Lion Capital for additional funds and as of April, Lion had warrants for shares equivalent to a 12.4 percent stake if they were exercised. (A spokesman for Lion Capital said the firm and its cofounder Lyndon Lea declined comment.)

American Apparel turned to the public markets this year to boost liquidity, generating $28.5 million in proceeds from the sale of common stock and diluting existing holders, including Charney, in the process. Some of the proceeds were used to pay down its credit facility with Capital One.

But, as has been the case throughout the last five years, adjustments to American Apparel’s balance sheet have tended to ameliorate one problem while complicating another. The annual interest rate on its loan from Lion increased to 20 percent from 18 percent after an earlier “special interest trigger event” took place at the end of 2013 when its debt-to-equity ratio exceed 4.5 to 1.

Charney remains the single largest shareholder in the retailer, although his stake was diluted in April by a public offering that saw his holding reduced to 27.2 percent from 42.8 percent.

The smaller stake might well have given the ceo less sway with the board.

“The fact is that with his behavior, he should have been fired years ago,” said one top executive at a specialty chain. “Anyone who behaves like that shouldn’t be running a company. The fact that he stayed on for so long is disgraceful. Behaviorally, he earned the right to get kicked out.”

Charney was also seen by some as in over his head.

“I’ve watched the stores,” said a women’s specialty store executive. “They started out with basic T-shirts, a factory direct kind of concept, great T-shirts, great colors, fast fashion, but I believe they evolved beyond what Dov knew what to do. Now you go into the stores and it’s a full-blown concept with every product category. The stores got bigger, they lost their focus and became almost overwhelming. [The company is] almost like a knit factory that evolved to a chain of stores worldwide. Dov got to a different place, beyond his reach.”

One retail industry insider said: “Dov was clearly having trouble. It was tough for the board to tolerate him. When the lawsuits started stacking up, the board had no choice. He settled several things personally, so it would not affect his employment.”

Some saw Charney’s lifestyle and the brand as too close for comfort.

“The way it portrayed young girls was a little tough,” noted the retail source. “The images were exploitive to women and they started to match his reputation. The imagery and his reputation seemed to blur together. I believe the imagery was quite alienating actually and appealed to a smaller percentage of girls, a limited customer base, who would aspire to look like that.”

“It’s the end of an era,” said Mathew Swenson, former American Apparel marketing director. “I doubt there will be another chance to have a ceo that would allow you to do some of the things we did that were great. A new ceo would probably not even allow those things to be tried.”

Swenson was referring to the company’s socially aware advertisements and campaigns for factory worker rights, immigration reform and gay rights, as well as its liberal office culture. “Some of the better things we did get buried under the fact that we also showed girls in thongs,” he said.

In general, the brand itself is seen as solid.

“Survivability of the brand is not in question,” said Andrew Jassin, managing director of Jassin Consulting Group. “In almost every [case], even Apple, the company has survived the [departure] of its originator. The consumer doesn’t know who Dov is, and there’s no dramatic point of view except for a tongue-in-cheek comment or graphic on a T-shirt every now and then. Dov leaving could be a good thing. It perhaps can open the door for some clear thinking and new ideas.”

Jassin also noted that Charney leaving the company might be a plus for those consumers who have read about him being an “aggressive womanizer” and view that as a negative for the brand.

Financial and market sources saw Charney’s ouster as the first step toward a sale of the company. Industry executives said there’s been interest among financial buyers in acquiring the firm. Many potential buyers were said to have seen Charney as a liability.

“Charney fired many people over the last few months,” one market source said. “Charney has been the power keeper of everything. There is no more marketing department, no more allocation department, and even the firm’s general counsel left a month ago.…Dov was a one-man band.”

Marty Staff, a consultant and former chief business development officer at American Apparel, said: “I worked with Dov about a year and a half. Dov is a visionary. He did all the heavy lifting for the brand. It’s still a wonderful brand with a very significant business opportunity that’s unrealized.”

Sources said the level of financial sponsor interest has kicked up overnight as they begin to reevaluate the company.

Speculation in the industry is that a sale would likely involve a financial buyer, not a strategic one. While players such as Gap Inc., PVH Corp. or Urban Outfitters Inc. were names that were raised as “could be interested” in American Apparel, one potential stumbling block is the factory that produces American Apparel product.

One apparel source noted, “American Apparel owns the factory it uses, but not the building where the factory is housed. Charney has overpaid the workers and if the factory is adjusted so it is right-sized, that might cause the 7,000 employees there to unionize.”