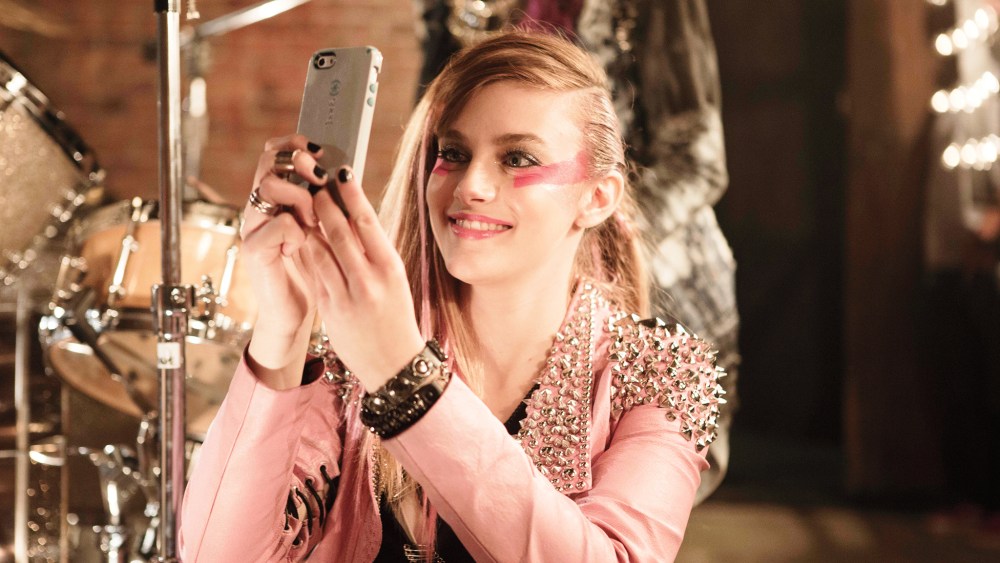 It’s a common joke in Hollywood that most young actors cast in the remakes of popular cartoons are too young to recall the originals.

That’s certainly true of Aubrey Peeples, the star of the upcoming film “Jem and the Holograms” (Universal Pictures), based on the beloved animated series about a young woman who transforms into a pop star whenever she utters the immortal phrase, “Showtime, Synergy!”

“Jem” premiered in 1985, roughly a decade before Peeples was born.

“I had no idea what it was,” the 21-year-old says of landing the role. But, no doubt about it, she knew it was a big deal.

With a bubblegum-pop sensibility and an ahead-of-its-time girl-power message, “Jem” was popular in the three years it was on the air and, over time, became a cult favorite, much like predecessors “Josie and the Pussycats” and “Ladies and Gentlemen, the Fabulous Stains.” Those fans of the original will find a lot to appreciate in the live action adaptation that hits theaters Oct. 23.

“All the messages are still there — family, right versus wrong, figuring out who you are and self-expression,” Peeples says. “Also all the classic Jem performance looks are super-inspired by the cartoon and the Eighties in general. There’s lots of pink and leather and makeup and starbursts.”

Peeples is herself part of the plan to reintroduce a 30-year-old character to new audiences: a young face with strong vocal and acting chops. After a string of guest-starring roles on series like “Drop Dead Diva,” Peeples made a name for herself on ABC’s country music soap “Nashville.” She described the role of the up-and-coming singer-songwriter Layla Grant as “a game-changer,” one that helped inspire her own songwriting.

“It’s very meta because the people who play musicians on the show are musicians in real life, but most of us have not had the opportunity to pursue that,” she says. “This show has opened up those doors, like I’ve gotten to perform at the [Grand Ole] Opry and go on tour. So we’re playing these characters whose musical careers are evolving, but that’s also happening to us at the same time be- cause we play these characters.”

Peeples, who did professional theater as a child and began classical vocal training at age 10, also plays guitar and piano, which she says helped her develop her musical style.

“I’m a blues singer mostly, and I always knew that I wanted to write but I didn’t really know what about until recently. I’m hoping to have an album released in the next year and a half,” she says. Still, “I never thought about quitting acting. They’re both such strong passions of mine and they are very different.”

As for her personal life, don’t ask if she has boyfriend. “I don’t want to talk about that. You can definitely find out if you follow me on social media. It’s pretty obvious right now,” she says, grinning. (Facebook and Instagram show cute, emoji-heavy photos of Peeples with Nashville-based guitarist Daniel Donato.)

She’d much rather talk about the literal skeletons in her closet. “I collect them. I have a bat and a bird and snake, and a butterfly collection,” she says. “Mostly I just like to write music and spend time with my family and friends and jam.”

The quirks and jamming sessions are all in keeping with alter ego Jem, and the actress playing her hopes the shared personality translates to film.

“There is a big responsibility that comes with it,” she says. “It’s like stepping into a bit of history.”