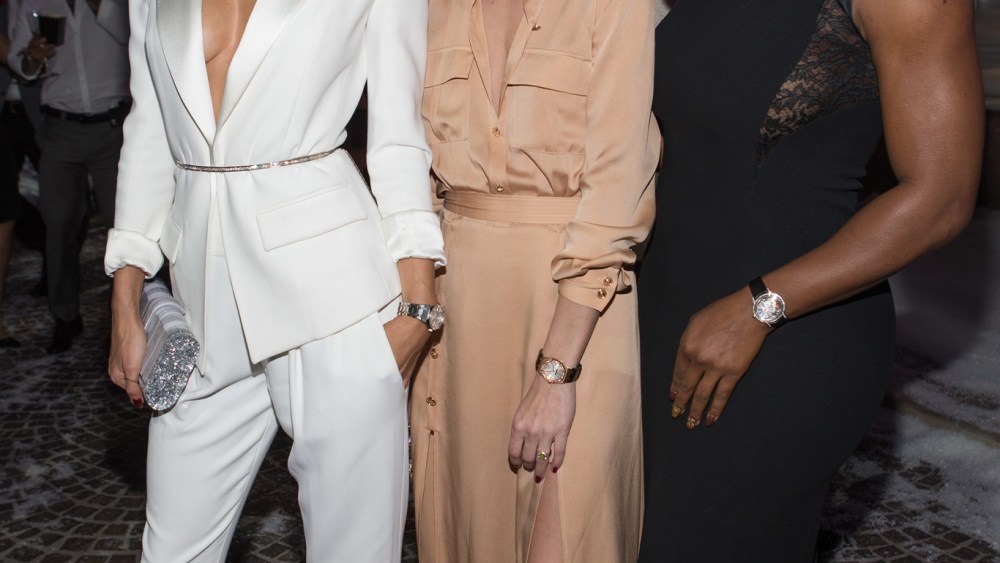 Audemars Piguet opened its first boutique in Beverly Hills at 254 Rodeo Drive on Wednesday, welcoming about 300 guests to a winter wonderland along the cobblestone Via Rodeo. Joining chief executive officer Francois-Henry Bennahmias were brand ambassadors Freida Pinto and Serena Williams, and James Corden, Alessandra Ambrosio, Anthony Anderson, John Mayer, Olivia Palermo, Kevin Hart, Joel McHale and Jeremy Piven. Sylvester Stallone, an avid watch collector, showed up before the party even started, as workers were still spreading artificial snow along the street. He was given a guided tour of the 1342-square-foot, tri-level boutique, in a space that was formerly a Westime.

A white neon sign outside read “Welcome to Le Brassus Hills,” and as a nod to the Swiss town, there were stands offering mulled wine and raclette and a fire pit.

The boutique is the fourth U.S. store for the family-owned Swiss watch brand, after Las Vegas, New York and Bal Harbour, Fla. “It has been a long time due to come to Los Angeles. It has been a really successful story for Audemars Piguet as well,” Bennahmias said. Of the polished oak, Vals stone and metallic surfaces, he said, “We try always to bring the same signature to all our stores,” which number 50 worldwide in 38 countries. “By 2021 our goal is to have 100 boutiques in the world. There is a lot still to do,” he said.

The stores stock all timepiece styles, including some, like the Diamond Punk cuff and Royal Oak Tourbillon in ceramic, sold only in the boutiques. Watches for men comprise 70 percent of the business, but Bennahmias said it’s hard to gauge what percentage of the styles are sold to women since they wear mens’ styles as well.

“Part of the success of the brand was my first meeting with Arnold Schwarzenegger here in 1998 where we decided to work with each other. Los Angeles will always be a part of the success story of the brand but it’s not only Hollywood. It’s a community we’ve built over the last 16 years and it’s really just the beginning. I do believe that when we have 100 boutiques in the world, Los Angeles will be in the top 10,” Bennahmias said.