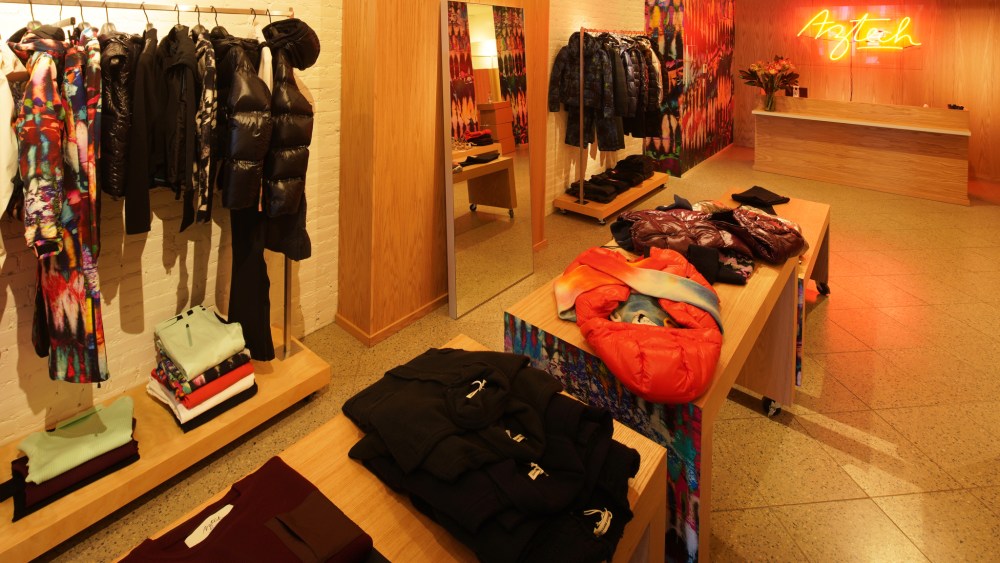 Aztech Mountain has touched down in TriBeCa.

The high-end skiwear-inspired brand has opened its first brick-and-mortar store at 42 Hudson Street, offering its complete collection of men’s and women’s apparel alongside a few complementary third-party brands such as I Pezzi Dipinti and Authier 1910, a women’s outerwear brand that has limited distribution in the U.S.

The store had a soft opening a week ago and is already catching the attention of local shoppers, according to Anthony Heifara Rutgers, who started the brand in 2013 with David Roth. Aztech Mountain, which counts Olympic ski star Bode Miller as an equity partner, has built its business by offering performance products that work as well on the slopes as on the city streets. Its cutting-edge design aesthetic offers an alternative to the behemoth brands such as Canada Goose and Moncler and it has experienced growth during the pandemic as consumers embraced the outdoors.

Its mountain-meets-city sensibility is the reason the brand chose New York for its first store rather than a ski town, Rutgers said. “Half of our team lives here and half in Aspen,” he said. “New York has been my home for 21 years and David is a native New Yorker.”

In addition, Aztech Mountain has strong relationships with local shops in ski communities such as Aspen, Vail, Park City and others so the owners didn’t feel it was necessary to try and compete with them by opening their own store in those cities.

The New York shop has 1,750 square feet of selling space and houses the brand’s offices and showroom in the rear. The bulk of the merchandise is centered around outerwear and skiwear, but the store also offers knitwear such as cashmere turtlenecks from Italy, accessories and some home products such as blankets.

Rutgers said despite the supply chain issues, Aztech Mountain placed its orders early and is fully stocked for the season — at least when it comes to its collection. The carpet, shelving and fitting-room curtains for the store, however, have yet to arrive. “A few things are late,” Rutgers said, “but not the clothes.”

Although Aztech Mountain began as a men’s brand, it began offering women’s three years ago and that category now accounts for nearly half of all sales, Rutgers said. The women’s assortment was initially centered around a couple of core styles, but has since been expanded to a full collection of ski jackets and pants, technical fleece, sweaters, shirts and hoodies.

“We’re still self-funded, so we had to walk before we run,” he said. “But we saw that some other brands were faltering during COVID-19 so we doubled the size of the collection and are now offering all categories.”

In women’s and men’s, the bestselling product is the Nuke Suit, a jacket in four-way stretch nylon insulated with traceable down that retails for $1,650. The jacket, which was the brand’s first product and is now available in seven colors and a print, is also offered in a cropped version for women.

Other top sellers in women’s include a long city jacket, the Badrutt Super Puffer Parka for $1,100, and a hot pink shell suit that was a favorite of Bella Hadid last year. In men’s, a workwear-inspired insulated shirt and a plaid ski shirt are popular items, in addition to the core ski jackets.

Rutgers said the brand has no plans to do a spring or summer collection and is “in conversations” with other brands instead to install pop-ups for swimwear and other warm-weather categories in its store during those months. And while it’s on their wish list to one day expand into hiking and other outdoor-inspired products, there are no plans to do that immediately, Rutgers said.

“We don’t believe in being everything for everyone,” he said, adding that the high-end customer buys skiwear year-round so Aztech Mountain still sells some of its collection in the summer months. Plus, it has a presence in 120 stores in 10 countries around the world including Europe and Asia, which represent 30 percent of its overall business, so there are opportunities to generate sales in different climates. Notable wholesale clients include Bergdorf Goodman, Saks Fifth Avenue, Ssense, Farfetch, Matches Fashion, Mr Porter, Lane Crawford and high-end ski shops in Austria, Switzerland and Germany.

Wholesale still accounts for some 80 percent of Aztech Mountain’s overall business, although Roth said the brand’s direct-to-consumer business is on track to exceed 20 percent this year. Although there are no immediate plans to add other brick-and-mortar locations right now, there are a few seasonal markets where the brand doesn’t have a strong wholesale partner where it would consider adding a store, notably London and Tokyo, Rutgers said.

Before creating Aztech Mountain, Rutgers worked at LVMH Moët Hennessy Louis Vuitton’s watch and jewelry division and moved on to Marc Jacobs. Roth has an MBA from New York University and is a trained forensic accountant whose grandfather started the eyeglass firm Avant-Garde, which was eventually sold to Luxottica, and whose father started Marchon, which was sold to VSP in 2008.