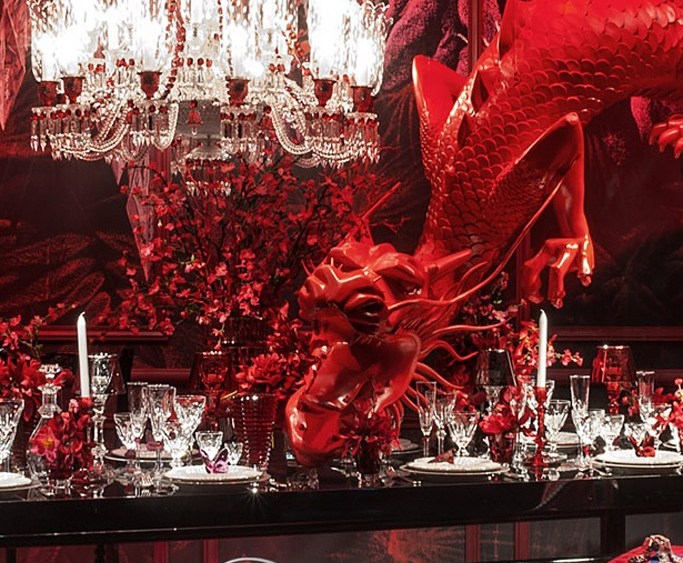 PARIS — Printemps, the French department store famous for large-scale partnerships with fashion brands like Dior and Prada, has given over its windows, central atrium and even a pop-up Alain Ducasse café to crystal-maker Baccarat, which is marking its 250th anniversary this year.

The invasion, which runs through Aug. 23, trumpets the two companies’ belief that high-end table and homewares are on the rebound as consumers return to entertaining and discover what Baccarat chief executive officer Daniela Riccardi calls “shared luxury.”

“It’s an area where we are investing,” Printemps chairman and ceo Paolo de Cesare said, leading a tour of the retailer’s sprawling Boulevard Haussmann flagship, where museumlike displays of Baccarat’s history — and a range of crystal items exclusive to the French retailer — are displayed in high-traffic passageways.

While luxury homewares represent perhaps 3 to 4 percent of the French retailer’s total business, they now account for more than 20 percent of its total home business, and that number is rising.

Baccarat has a shop-in-shop on the second floor of Printemps’ home store amid a clutch of high-end home brands — including Saint-Louis, Hermès and Lalique — and a main floor exposure in its fashion building for jewelry and accessories.

“We felt that [Baccarat] has an amazing story, and more importantly, an amazing future, so we wanted to be a part of its celebrations,” de Cesare said.

The executive argued that educating and delighting shoppers about lifestyle trends and rare savoir-faire helps “build a long-term relationship with our customers.” They include streams of elite Chinese tourists, who are increasingly enamored with French wines and are gravitating toward Baccarat’s glasses designed for specific varieties like Bordeaux.

De Cesare acknowledged that crystal and tableware have weathered a tough period since the late Nineties, as casual lifestyles and a dwindling wedding-list business dented demand. However, the tables turned over the past four years as a new generation of local and foreign consumers has started buying luxury home objects for themselves, with de Cesare citing single purchases in the range of 10,000 to 30,000 euros, or $13,610 to $40,840 at current exchange. It dovetails with a “huge” trend toward “food and luxury food,” he added.

Pointing to a display of tall Baccarat vases, he said: “If you think one is the cost of a bag that lasts maybe two seasons, here you have the savoir-faire of 250 years,” he said. “Customers are returning to authenticity, to quality.”

The transporting windows depict dinner tables in settings evoking Asia, Russia, Brazil or Arabia, the latter featuring a sand dune, a stuffed falcon and a sprinkling of fashion accessories. This “takes the brand out of its environment,” de Cesare explained, something “only a department store can do, to expand the brand outside its natural language.”

The Printemps tie-up is among a slew of anniversary festivities for Baccarat, which will culminate with an exhibition at the Petit Palais museum here in mid-October.

Riccardi, who joined Baccarat last year from Diesel, said the Printemps showcase offers a “window to the world,” given that Paris attracts tourists from all over the world, and that the department store bills itself as a high-end fashion destination.

“I wanted to put Baccarat back into the modern environment,” she said. “I want to create that glamorous connection.”

Among limited-edition products developed for Printemps is a printed silk scarf festooned with engraving patterns from the Baccarat archives, which “might become another area of the business,” Riccardi noted.

De Cesare said Printemps has carried Baccarat for most of its 149-year history, showing an 1884 catalogue touting a set of crystal toiletry decanters priced at 12.75 French francs. Its limited-edition items, all incorporating red crystal, range from 75 euros, or $103, for a key chain up to 61,200 euros, or $83,310, for a chandelier with deer heads.