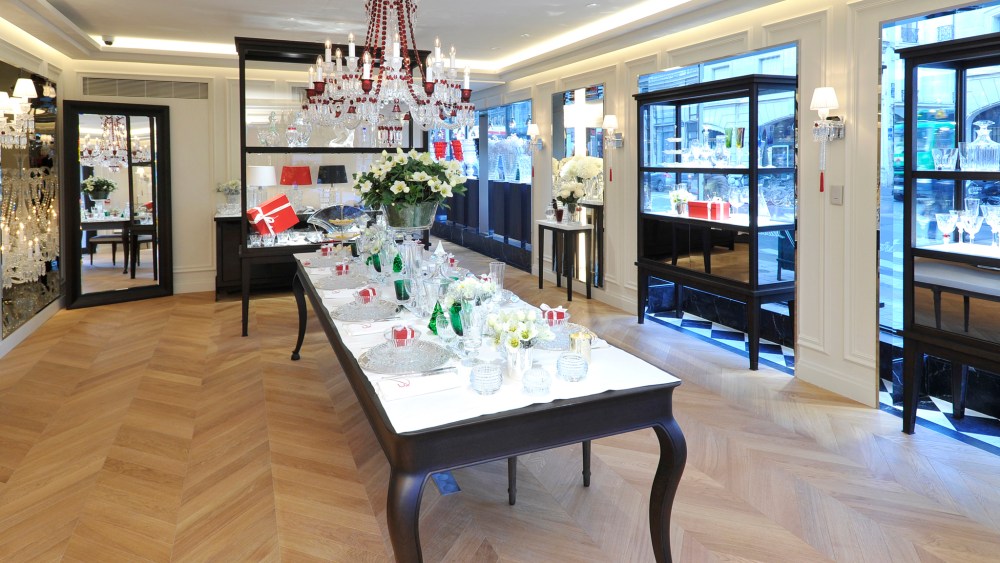 PARIS — Step into the new Baccarat boutique on the Rue du Faubourg Saint-Honoré and you might think you’ve stumbled upon a very chic holiday party.

A dining table appointed with flowers, crystal pine tree ornaments and an array of sparkling place settings sits front and center on the chevron parquet floor, flanked by modernist china cabinets filled with an eclectic and colorful collection of vases, glasses and other tableware.

“The idea was to make something warmer, more like a home than a boutique,” Daniela Riccardi, chief executive officer of the French crystal specialist, told WWD during a walk-through on Monday, just before the unit opened to the public. “It’s to really show the art of living à la Française. You can really feel it.”

Indeed, a small niche dedicated to gifts for men includes an armchair, a cigar propped in an ashtray, a trolley loaded with barware and a desk appointed with a crystal orb and clock — as if the recipient had just stepped away for a moment.

Located across from the Bristol hotel, the Faubourg store replaces a historic unit on the Place de la Madeleine, shifting Baccarat from a retail district dedicated to fine food to one of the French capital’s premier luxury and fashion strips.

It’s one of three simultaneous openings reflecting the new “maison” concept. A street-level location resembling a Korean townhouse opened Dec. 3 in Seoul, and a unit is to open in the new luxury Boulevard Mall in Jeddah later this week that melds French touches with Middle Eastern tastes and local entertaining customs.

A fourth maison — Baccarat’s first flagship in China — is slated to open in January in Beijing, facing Shin Kong Place at Central Mall.

The new Paris unit, a corner location spanning three floors and about 3,500 square feet, was designed by architects Gilles & Boissier with details one might find in a grand French townhouse or Parisian apartment: moldings, checkered marble floors and, of course, chandeliers, set here in mirrored wall niches or hung at eye level in front of windows, allowing customers to appreciate the fine detail, while pedestrians outside can see them twinkling at night.

The residential setting dovetails with a merchandising scheme that invites customers to “think differently about crystal. It’s not a product that you keep in your cabinets and take out only when your mother-in-law visits,” Riccardi said. “It should be part of luxury living.”

To reinforce the message, Riccardi has assembled unusual gift boxes for the holiday season, including sets of six mismatched tumblers that can be used for morning orange juice; a duo of small espresso cups on a red crystal tray, and what she called “a cocktail party in a box,” offering a shaker and eight glasses of different shapes, including Champagne flutes, martini glasses and highballs.

The second floor of the boutique boasts a by-appointment salon for selling chandeliers and other big-ticket items, including César Baldaccini’s thumb sculpture, now available in a limited edition of midnight blue crystal just for Faubourg.

The boutique will also eventually house a basement event space, and an officelike area for large-scale architecture and decoration projects.

Since joining Baccarat in 2013 from Diesel, Riccardi has narrowed the product range to about 1,000 references, down from a peak of more than 7,000, allowing the company to optimize production and distribution cycles. That means roughly one-third of stock is on auto-replenishment and never of stock; one-third is more seasonal, and the remaining third is made-to-order, including large vases, animal sculptures and chandeliers, she explained.

The main floor of the Paris store showcases all product ranges, including jewelry, displayed in cases along a wall running the entire length of the store. The category generated about a third of sales at the former Madeleine location, suggesting it has promise as a “good entry point” to the brand, or an add-on sale reinforcing the idea of crystal as an everyday item, Riccardi said.

The executive disclosed that Baccarat has tapped jewelry designer Marie-Hélène de Taillac to create a collection for spring 2016 release that takes inspiration from “the classic shapes of the crystal.”

Baccarat’s retail network now spans 90 points of sale, including freestanding stores and concessions. Despite a sharp slowdown in sales of liquor decanters due to the anticorruption crackdown in China, Baccarat is on track to post a double-digit gain in like-for-like sales this year, Riccardi said.

The company is also mulling a new, smaller retail format for 2017 that would be focused on gifts offered in the brand’s signature red boxes. Such units would be targeted at airports, malls and department stores, akin to pop-ups, she noted.