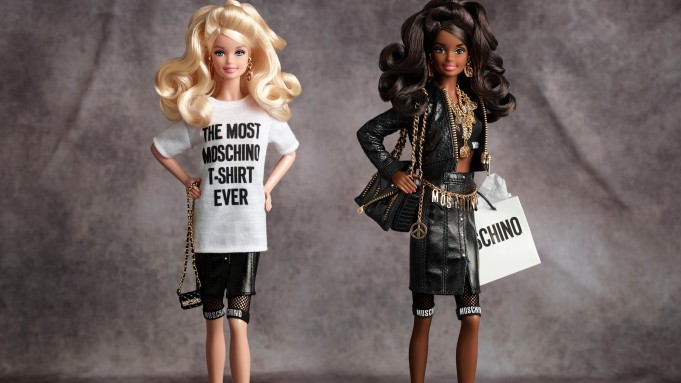 It’s no secret that Barbie is one fashionable doll.

Since its launch in 1959, the doll, manufactured by Mattel, has collaborated with a number of brands, creatives and people to create limited-edition dolls and collections to celebrate Barbie’s mark on popular culture and fashion.

Over recent years, the company has become more committed to promoting diversity, inclusion and equality, creating dolls of all shapes and sizes.

With the anticipated “Barbie” movie, which stars Margot Robbie and Ryan Gosling as Barbie and Ken, in the works, fans are intrigued to know more about the movie and what it entails. Award-winning director Greta Gerwig has been tapped to direct and write the movie.

Here, WWD breaks down some of Barbie’s biggest fashion collaborations over the years. Scroll on for more.

In January, Balmain and Barbie collaborated to create a limited-edition, 70-piece collection. The brand’s creative director, Olivier Rousteing, designed pieces ranging from 195 euro T-shirts up to 29,990 euros for a couture-caliber evening gown. For its launch, Neiman Marcus mounted a special pop-up in Dallas.

The designer applied assorted shades of pink, from blush to fuchsia, to a range of emblematic Balmain styles including sailor sweaters, tailoring in satin or tweed, denim jackets with demonstrative gold buttons, intricate cocktail dresses and a fishtail evening gown. There are also lots of easy T-shirts and sweatshirts with graphics cribbed from 1970s packaging, plus jeans with a disco flare.

In 2015, Moschino teamed up with Barbie to create a doll and capsule collection for women.

In 2019, the cult-favorite streetwear brand teamed up with Barbie for her 60th anniversary, creating a doll and giving it a streetwear makeover with miniature apparel and accessories from Kith Women’s collections.

As part of the Barbie Tribute Collection, which launched last year as a way to honor and celebrate female visionaries for the incredible contributions they have made to culture, Mattel partnered with the legendary American fashion designer in May to create a doll.

In 2014, the legendary German couturier and Barbie teamed to make Barbie Lagerfeld, a limited-edition doll being launched this fall by American toy giant Mattel Inc. and the iconic, Paris-based designer.

Part of the Barbie Collector series, the doll is dressed according to Lagerfeld’s signature look: a tailored black jacket, a white shirt with a high collar and skinny black jeans. Accessories are key, including a fat necktie, dark sunglasses and black ankle boots.

In 2017, the model and Barbie partnered to make a doll in her likeness, celebrating her second capsule collection with Tommy Hilfiger. Hadid’s Barbie was decked out in a Tommy Hilfiger logo T-shirt, cutoff denim jeans and roller blades, which was fitting for the runway show held in Venice Beach in Los Angeles. An actual Barbie doll was created for the event.

In 2007, the Belgian designer teamed with the fashion doll to create a doll inspired by herself, complete with dark brown long hair and her signature wrap dress in bright pink.

In 2004, at the height of the now-iconic Y2K fashion, the then-very popular brand created two fashion dolls depicting their founders Pamela Skaist-Levy and Gela Nash-Taylor. The two Barbie dolls are wearing Juicy’s signature tracksuits in bright green and hot pink. Click here to see the collaboration.