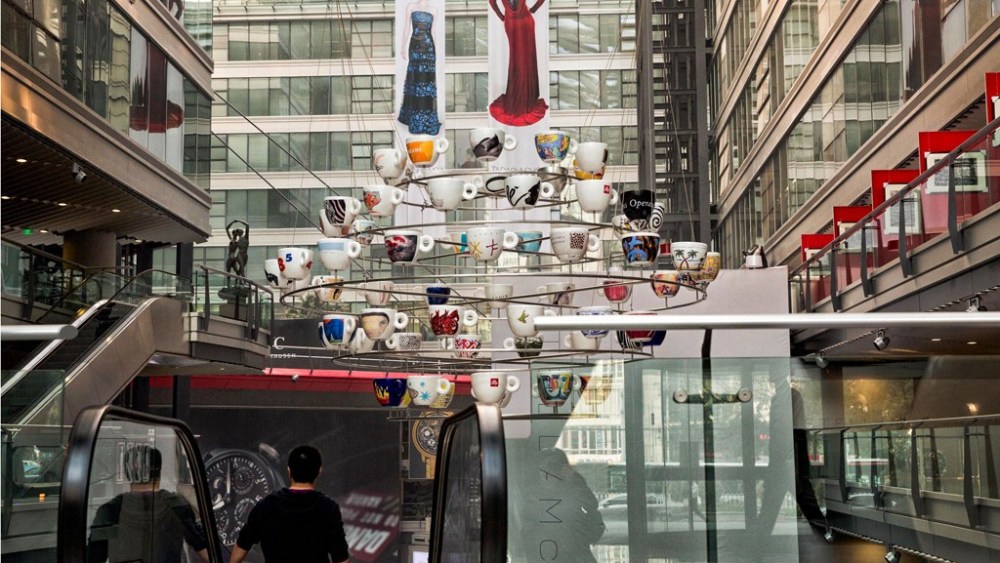 BEIJING — A futuristic retail and commercial space billing itself as one of China’s greenest buildings has finally opened here after a four-year delay.

Along with boutique hotel Eclat, expected to open before year’s end, Parkview has scored the retail coup of signing the first-in-China locations for Karen Millen, Hennes & Mauritz AB’s COS brand, men’s shirting company Ted Baker and Ivanka Trump Fine Jewelry. The development will also be home to the Beijing flagship of Stella McCartney.

“Our message to give out is this is a unique space. We want to position ourselves as somewhere people would like to spend time. We are building a venue, a space, instead of just another mall,” said Parkview’s executive director, Leo Hwang.

There’s also a strong focus on watches and jewelry in keeping with local traditions of gift-giving in business. Swiss watchmaker IWC, Chopard, Breitling, Carrera Y Carrera and Wempe — the latter opening its first Asian flagship — will all have a presence.

The development, intended as an indoor oasis from Beijing’s sultry summers, freezing winters and year-round bouts with thick air pollution, features bridges between buildings liberally adorned with greenery, and an emphasis on light. Two of the office towers are 18 floors high, while two others were said to have been cut to nine floors to allow sunlight into the surrounding neighborhood.

Designed by architects Integrated Design Association and engineered by ARUP, the building boasts its own geothermal system for heating and cooling, rooftop louvers that assist the ventilation system, and recycling of wastewater into the irrigation system.

Scattered throughout its 800,000 square feet of space is the personal art collection of Hong Kong tycoon George Wong, the chairman of Parkview Group. Ranging from tasteful (40 certified remakes of Salvador Dali sculptures) to the odd (a series of bright red oxen suspended in mid-air), the pieces are incorporated throughout the shopping areas, public spaces, restaurants and office towers; a dedicated art gallery features several prominent Chinese artists including Yue Minjun, known for his laughing faces.

The building is one of several standout architectural projects originally destined for completion before Beijing’s 2008 Summer Olympics, along with the Birds’ Nest stadium, the National Centre for the Performing Arts, better known as the Egg, and the new CCTV tower, popularly known as Da Kuzi, or the Big Pants. Fire inspection committees set up for these special projects contributed to the delays, Hwang said, as they tried to adapt their eco-friendly building to established fire code standards.

The project, which had its soft opening last month, is still in the finishing stages; the smell of fresh paint and floor varnish still permeates and just six stores of the 88 retail spaces have already opened. However, Hwang said they expect to have 80 per cent occupancy before the shopping rush for Chinese New Year, in early February 2013.