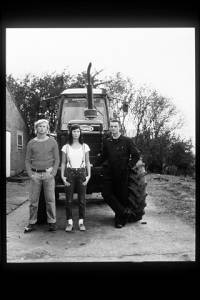 Exhibitors at the Bread & Butter and Premium Sportswear Couture shows presented cleaned-up jeans styles, with details including wide waistbands and extra pockets. There was an emphasis on alternate fabrics for fall-winter 2003-2004, including corduroy and cotton twill, which some exhibitors conceded reflected cooling consumer ardor for denim. Mixed-fabric styles were a common theme.

Bread & Butter, which had a popular three-season run as a small, alternative exhibition parallel to the former Inter-Jeans fair in Cologne, made the transition from a side event to major trade show with hardly a hitch, and without losing its edge. The organizers of Inter-Jeans, which had renamed their show Vibes4U, decided to pull the plug on their event last month.

Fears that retailers wouldn’t make the switch from Cologne to Berlin proved unfounded, as an unexpectedly high turnout caused traffic jams and long registration lines at Bread & Butter on opening day. During the three days, more than 15,000 trade visitors trekked to an old cable factory in an outlying Berlin district, where 250 international jeans, streetwear and urbanwear brands showed in more than 215,000 square feet of space.

On the show floor, cargo pants were a a key part of the mix, and there were enough camouflage and military styles at Bread & Butter to outfit a fashion army. The looming threat of a conflict between the U.S. and Iraq, however, had many companies shying away from the military tag, with “utility” now the favored word to describe the trend.

“I find all the military looks a bit scary,” said Manuela Fassbender, an international trend consultant based in Berlin. “Is it an endorsement or is it just reflecting what’s happening in our lives?”

Still, she said she believed the trend was an important one.

“It’s important to take camouflage to the next step,” she continued. “It’s already in all the stores and they’ll be flooded with green by spring.”

She pointed to satin applied to khaki and other use of piping as interesting new looks, and noted the continued strength of active sportswear influences. Dark, clean denim, often with a gray tint, will be important for fall she said, adding: “And the next thing, of course, is khaki.”

Attendees and exhibitors agreed that business conditions are likely to remain tough, particularly in Germany.

As Oliver Puhlmann, the Berlin agent for Mohave Jeans summed it up: “2003 will be like 2002. Difficult. But through the new collections and a more frequent ordering rhythm that’s closer to retailers’ needs, we expect business to improve.”

Puhlmann’s hit list for next season included vintage looks, material mixes, cargo pants and corduroy. He added that the “three-quarter length is hip again, with lace-ups on the bottom.”

The emphasis on other fabrics, he acknowledged, is a sign of softening demand for denim, which has enjoyed several years in the fashion spotlight.

“It’ll always be a theme, but it’s gotten weaker,” he said. “It’s difficult to keep coming up with new washes, and people are searching for an alternative to denim. Corduroy’s gotten stronger.”

“We’ve had a fantastic start to spring-summer, which is in store now,” she said. “People’s attitude to fashion is good right now. The fashion is so accessible.”

She said there’s “still a lot of strength in utility or combat looks.”

“We’re really focused in that area,” she said. Her company’s emphasis was on contrasts, showing utility bottoms with sexy tops, and twills with silks.

G-Star is putting its weight behind denim for next season. “We think it’s important to make our own look in denim,” said Patrick Kraayeveld, export manager. The two highlights are G-Star Originals Tailor-made, a select, back-to-the-roots raw denim range, in a slightly crinkled and streaky look. True to its name, Tailor-made features high-end details including covered inside seams, bias-cut waistbands and handmade rivets.

G-Star also offered “construct denim.” It’s available in only two washes: burnt denim worn in, and shadow denim raw damaged, where yarns with a different number of indigo dips are mixed together. The key model is a five-pocket, low-rise, boot-cut flare.

“The tough look for girls — army-related denim — is getting stronger and stronger,” Kraayeveld said. “The girly trend is going out. Girls want to be tough, and that’s what G-Star is.”

Rosanna Iacono, premium global brand director of Levi’s said she saw a similar development. “Our feeling is that a more masculine aesthetic needs to return. The low-waist, belly-baring look has peaked. Those overt expressions of femininity made sense in the context of girl power,” she said, “but as women become more confident, they don’t need to bare as much skin.”

She noted that among the most advanced fashion consumers, “there’s a renewed appreciation of the masculine aesthetic. And the opinion leaders are returning to workwear.”

So is Levi’s Vintage Clothing, which is offering a sleeveless women’s coverall copied from an original Twenties garment that its unknown owner had restyled to fit a woman, removing the sleeves, cropping the hem and adding belt loops and a replacement pocket in chambray.

The trend continues in Levi’s Red, where “we’re striving for a real, authentic look,” Iacono said. One style that aimed for that aesthetic was called Agnes, an oversized, loose, low-slung jeans model with workwear pockets and suspender buttons. Another was the Tabitha, loose-fit jeans with a straight wide leg, with suspender buttons and button tabs on the cuffs.

Red and LVC serve as an innovation lab for the main Levi’s collection, which picks up the trends one to two seasons later. But Iacono said she expects a swift move towards “more rigid garments. Not as rigid as shrink-to-fit, but the look and feel of pure denim again.”

A key part of the buzz surrounding Bread & Butter was the city of Berlin itself, with retailers invited on a Magical Mystery Tour of unusual venues scattered throughout the city.

The jeans brand, Mustang, combined business and entertainment at the Kula Karma lounge and restaurant on the liveliest stretch of Berlin’s SoHo-like Hackescher Hof neighborhood in Mitte. Mustang’s line presentations and customer meetings went on until 3 a.m.

Diesel staged a fashion show in the cavernous Sculptor Workshop in Wedding, which can accommodate the heaviest and most large-scale public sculpture commissions. Once they had made it to the location, buyers were bustled upstairs and downstairs by playful, flashlight-wielding welders.

Bread & Butter also secured the former East German privy council building for the Bread & Butter Offshow for Street Couture. Here, from 2 p.m. to 10 p.m., around 40 young designers and brands from Berlin and beyond showed their collections in small, open stands. The mixed lounge-and-show format is to be expanded at the next edition of Bread & Butter, which is also expanding to four days: July 17-20.

The new Premium Sportswear Couture show also chose a nontraditional venue. The event, which featured about 70 high-end jeans and sportswear labels, was held in the subway tunnels below Potsdamer Platz.

Exhibitors said they were happy with the attendance, even though the heat went out for one day of the show.

Dave de Boer, managing director of Fashion Solutions, the German agent for Mik Serfontaine, Del’Akyani, Brookies and others, said, “For us, Premium Exhibitions was extra good because all the exhibitors fit together. And the most important thing is that the customers took the time to really look at the collections. We did a lot of business.”