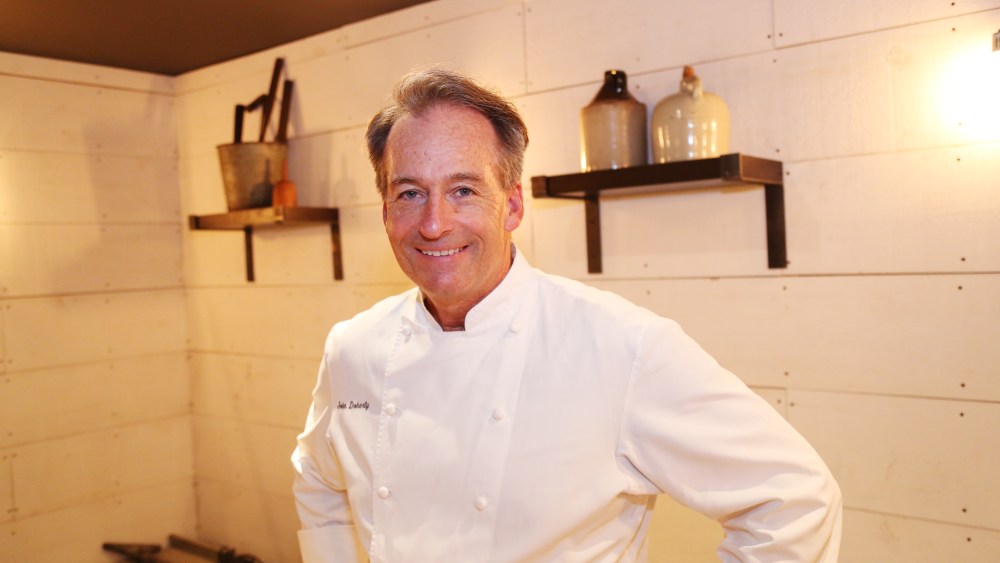 For fall, John Doherty has brought a piece of the Hamptons back to the city. The former long-time executive chef of the Waldorf Astoria is opening his first solo restaurant, Black Barn, in a space that takes diners off the city’s streets and into a looming wooden barn on 26th Street.

The restaurant’s barn-centric interior was the work of Mark Zeff, who designs houses inspired by the barns of the East End under the same name as the restaurant, Black Barn.

“We just stole his name, the Black Barn,” Doherty explains of the connection. “The week I left the Waldorf, I got a brochure dropped off in my office, I guess Mark or somebody in his office read in the New York Times that I was leaving the Waldorf to start a restaurant,” Doherty said. “I thought his work was stunning, so I went and talked with him, and we just hit it off.”

The massive, multilevel restaurant is festooned with rustic details in every nook — rakes and buckets hang from the exposed wooden walls, warm lights are interspersed among the barn rafters. A bar occupies the “tavern” in the front room, and the restaurant opens up into two full dining areas in the back and upper level. The restaurant also plans to run a chef’s tasting table — with a 5-course menu that will change weekly — and four private event rooms, one of which is in the wine cellar, which stocks over 1,000 bottles and seats 32 people.

“Many restauranteurs shied away from this space because of its size,” Doherty noted. “For me, the size is a blessing, because it gives an opportunity to diversify. It gives people choices. This thing can really crank, yet also feel intimate all at the same time.”

Doherty came upon the space a few years after leaving the Waldorf Astoria, where he had spent 25 years in the kitchen. He was the chef at the former restaurant SD26, but came in with the idea of turning it over into his own project eventually.

“As soon as I walked in, I felt at home,” Doherty recalls. “I’ll never forget it, by the time I got to where the open kitchen was, I knew. I just felt it.”

Like the space, Doherty’s culls from a country sensibility. The menu at Black Barn takes a seasonal, modern approach to country classics, highlighting ingredients from local farmers, ranchers and fishermen. The menu is divided into the usual categories: plates for sharing, appetizers, main courses, as well as a thought-out “garden” section, to highlight vegetarian-friendly dishes.

Looking out on Madison Square Park, the restaurant is located in what has become a prime area for dining real estate. Eleven Madison Park and the recently opened Edition Hotel are both a few blocks to the East; The NoMad Hotel and Ace Hotel are a few blocks Northwest. (It also probably helps that Credit Suisse’s New York headquarters are around the corner.)

“We’ve got so much business in the area for lunch and after work, and residents,” noted Doherty. “It’s become such a popular area — all the restaurants in this area are doing very well, and so its become a dining destination. I think we’re lucky to be able to tap into all of it. It’s continuing, there’s so much renovation going on.”

With so much in the area to see and do, Doherty is setting his sights on creating a haven from the busyness of the city.

“I want to create an environment where people can just relax, and enjoy themselves,” Doherty said. “And be blown away by amazingly beautiful and simple food, and great service that anticipates their needs.” To accomplish that, he has dedicated attention not only to crafting the menu and interior, but also to refining the steps of service and perfecting the smaller details — the entrance’s aroma, the texture of the doorknob.

“If you go to a restaurant and you’re not thinking about it the next day, something’s missing,” he concludes. “It’s not easy, but it can be done — and we will do it.”