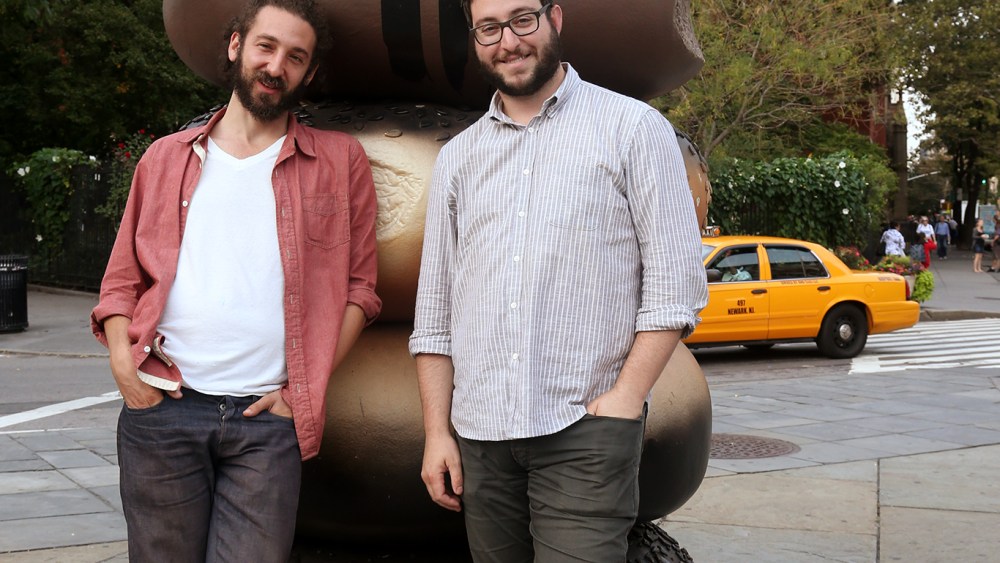 Noah Bernamoff has pastrami stuck in his teeth. It’s 4 p.m. on a Wednesday afternoon, and he and his business partner, Matt Kliegman, are posing for pictures in front of a giant bagel sculpture by the artist Hanna Liden in the West Village. He glances over at Kliegman’s curly mop of tresses. “Do you have any floss in your hair?” he asks.

Unfortunately, stray bits of meat are an occupational hazard for Bernamoff, who runs Mile End Deli in Boerum Hill, Brooklyn and on Bond Street in Manhattan. Less so for Kliegman, owner/operator of hot spots like The Smile, The Ballroom at the Jane hotel, and the food and beverage operations at Ruschmeyer’s in Montauk.

Where Bernamoff is easily excitable, Kliegman oozes chill. Together, they opened Black Seed Bagel in April of last year, bringing their hybrid New York/Montreal-style bagels to the masses of NoLIta. It’s a combination that describes the bread roll as much as it describes the duo.

Bernamoff grew up in Montreal, near a bagel shop that supplied his Jewish family with breakfast each morning. “It’s crazy to think my mom used to be like, do you want more than one?” he recalls. “I’d be like of course! In hindsight, that probably wasn’t a great idea.” Kliegman was raised in Long Island, which means, “I definitely grew up as a big bagel eater,” he says. “[But] I didn’t eat any smoked fish or any cream cheese actually until I was in my 20s. I would melt sliced cheese on a bagel.”

Though the pair was introduced by mutual friends, it was Hurricane Sandy that really brought them together. Bernamoff’s Brooklyn location suffered damages during the storm and Kliegman reached out to see if he could help. “He had lots of people helping him already and so he said why don’t we just get a beer?” says Kliegman. “And we did that for months, actually. Noah was baking bagels at the time, and at some point we were just kind of like, why don’t we do a bagel shop together?”

Black Seed Bagels was an immediate hit. In a neighborhood lush with restaurants but oddly starved for a bagel shop, the artisinal bakery hit the right note. “As a New Yorker, there were things about New York bagels that were not that good anymore, you know?” says Kliegman. “They’re really big, and it sometimes feels like there’s not a lot of care and thought put into the baking process.” Instead, Black Seed Bagels are rolled by hand and boiled in honey water before being baked in a wood oven and cooled in a marble chute with walnut peels — a far cry from your average deli find.

With the success of their NoLIta spot — and an offshoot at Hudson Eats inside Brookfield Place — Kliegman and Bernamoff are opening a third location in the East Village today. Formerly home to De Robertis Pasticceria & Caffe, they’re expanding their offerings to include pastries (traditional Italian cookies, banana loafs and bialys) and espresso drinks. “The plan is to offer some of the pastries for people who used to come here frequently,” says Kliegman. The space is also nearly double in size, which means it will feel more like a cafe — hopefully with shorter wait times. Much of the decor will remain the same, with the original tin ceiling, mosaic penny tile floors and the De Robertis neon sign out front. “We have to figure out how to get it to work, but it’s there,” says Kliegman. “Places with that kind of age are becoming fewer and fewer and so we were really excited about preserving a lot of it.”

In the car on the way from the bagel sculpture to Black Seed’s new location, Bernamoff successfully uses a gum package to retrieve the piece of pastrami. “Yes,” he cheers, pumping his hands in a raise-the-roof motion. “Nice,” says Kliegman.

“We’re pretty different,” says Bernamoff, looking at his colleague. “Nothing rattles Matt. And if something does, it is major. It is like, the most major thing thinkable. And I get rattled like 20 times a day. The simplest thing — the postman putting my neighbor’s mail in my mailbox gets me all, like, riled up. So I think we’re good because we bring different things to the table and I think we’re complimentary. I think that the two styles together in sum is bigger than what the styles are on their own.”