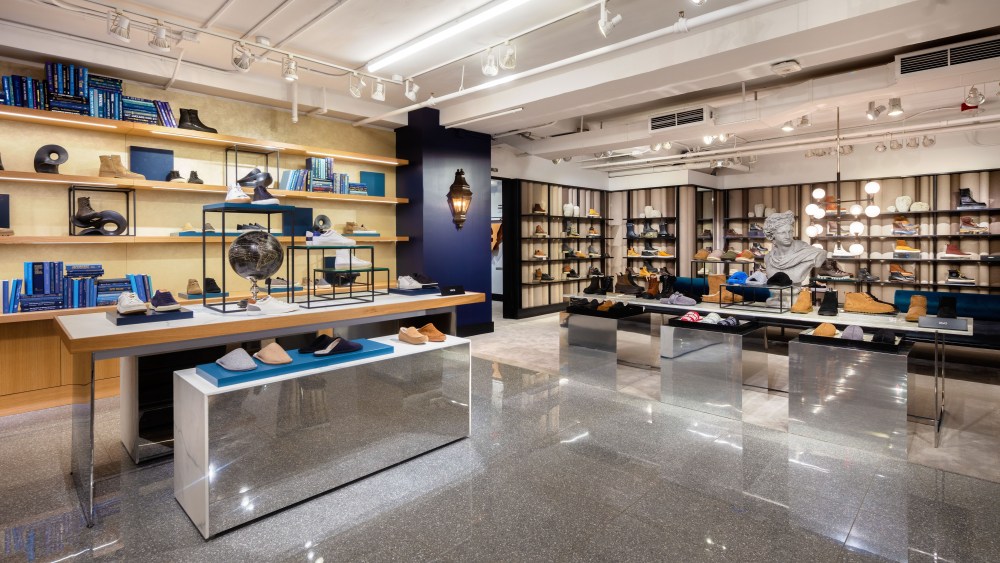 NEW YORK — The pulsating music from a live DJ was the first indication that something different was going on in the Bloomingdale’s men’s store.

That something different was the official unveiling of the retailer’s new men’s shoe department, a relocated and expanded area that boasts 70 percent more space and one of the largest selections of men’s designer shoes in New York. The department, which measures just under 13,000 square feet, features a wide assortment of casual and dress shoes from designer and performance brands as well as an assortment of accessories, select fragrances and a gallery of hats. All told, there are 10 new and expanded luxury boutiques in the space from Alexander McQueen, Balenciaga, Gucci, Saint Laurent, Burberry, Salvatore Ferragamo, Zegna, Tod’s, Givenchy and Valentino.

“It’s a very big footprint,” said Dan Leppo, executive vice president and general merchandise manager of men’s, Young World, home furnishings and cosmetics. “Whether you’re looking for the latest designer shoe or a performance sneaker, Bloomingdale’s 59th Street now brings together the best in men’s footwear conveniently in a single location. I’ll put this floor up against any other in New York.”

Although he declined to provide figures, Leppo said the shoe business has been one of the highlights of the men’s category online for the past 24 months and has experienced double-digit growth over the past few years.

Footwear has also been a cash cow for Saks Fifth Avenue, which opened a dedicated 8,000-square-foot men’s shoe floor at its flagship in the summer of 2019 and has said repeatedly since then that the category has been among its top performers.

At Bloomingdale’s, the space on the Metro level that formerly housed denim was the original home of the Saturday’s Generation collection many years ago, Leppo said. Until the department opened Monday, a smaller assortment of footwear had been located in the northeast corner of the building next to tailored clothing, which was not ideal, especially as the sneaker craze took off.

“We were underserving the sneaker customer by having the shoes next to tailored clothing and we wanted to create a true destination for shoes.”

Leppo said the planning for the space began well before the COVID-19 pandemic and dates as far back as 10 years ago when the retailer began pursuing more designer shoe brands.

“We had made big progress and wanted to go to the next tier after seeing our women’s shoe department being brought to life.” That happened in 2018, with a refresh last year.

The men’s department is bright and open, making it easy for customers to navigate. A key feature is a tunnel-like display with the solid wood ribbed installation that provides a path intended to draw customers into the space. It also serves to create a distinctive home for sneakers and active product.

The flooring is small chip terrazzo tile with rift cut white oak, there is polished stainless-steel shelving with ribbed acrylic material as the backwall in the active areas, and a custom-designed ribbed felt backwall with blackened steel underlit shelving for the classic shoe area.

Several brands are making their Bloomingdale’s debut in the department including Off-White, Palm Angels and Thousand Fell. Other top brands include Versace, Bottega Veneta, Lanvin, Moncler, On Running, Y-3, Golden Goose, Veja and Birkenstock. The Bloomingdale’s Cobbler Concierge has relocated to the floor and there are outdoors-inspired brands, including Diemme and Merrell.

Leppo said Bloomingdale’s was careful to deliver a “multitier, multivendor” experience to address the needs of its varied customers. “We want to be on trend and service all our customers’ needs,” he said.

The Valentino shop, which will open in early 2022, will be the largest of its kind in America and feature both dress shoes and sneakers. The department also features the largest To Boot presentation in the city, one of the biggest Birkenstock offerings and a “dynamite boot assortment.” The Tod’s and Balenciaga shops are temporary and the permanent spaces will be installed after the holiday season.

The caps from Mitchell & Ness, ’47, Smathers & Branson and an exclusive Fantasy Explosion collaboration inspired by New York City souvenir hats of the ‘80’s and ‘90’s were included since they’re popular with sneakerheads, Leppo said. “It’s a shoe floor but it plays to the whole lifestyle element of our customer.”

Leppo said that opening two weeks before Christmas was not ideal timing for launching a marketing campaign, but Bloomingdale’s is looking at this as a “long game.” Signs in the store tout: “Welcome to the Sole Club: Bloomingdale’s Outrageous New Men’s Shoe World,” and in the spring, a digital series will begin, windows will be dedicated to the department and there will be many brand activations. To start things off, on Dec. 18 a customization event with Ugg will be offered along with a Tod’s treat cart.

“Today is opening day but it’s not about a single day,” Leppo said. “We want this floor to be vibrant and active all the time.”

Overall, the men’s business has been steadily improving as customers feel more comfortable returning to retail stores, he said. Initially when stores were allowed to reopen after lockdown, customers would make quick trips to grab and go. Now they’re visiting more frequently and spending more time per visit.

“And as tourists return, we see it propelling the business even more. We conceived this before COVID-19 and it shows our commitment to omnichannel retail,” Leppo said.

He said the selection is also being sold online and branch stores are being offered the expanded assortment. Larger or newly renovated stores such as South Coast Plaza in Costa Mesa, and the Century City unit in California may get shops as well, but this large statement is limited to the flagship.

Speaking of the flagship, Leppo said the shoe floor is just the first of several big renovation projects planned for the men’s floor in the future. “There will be more to come next year,” he said.