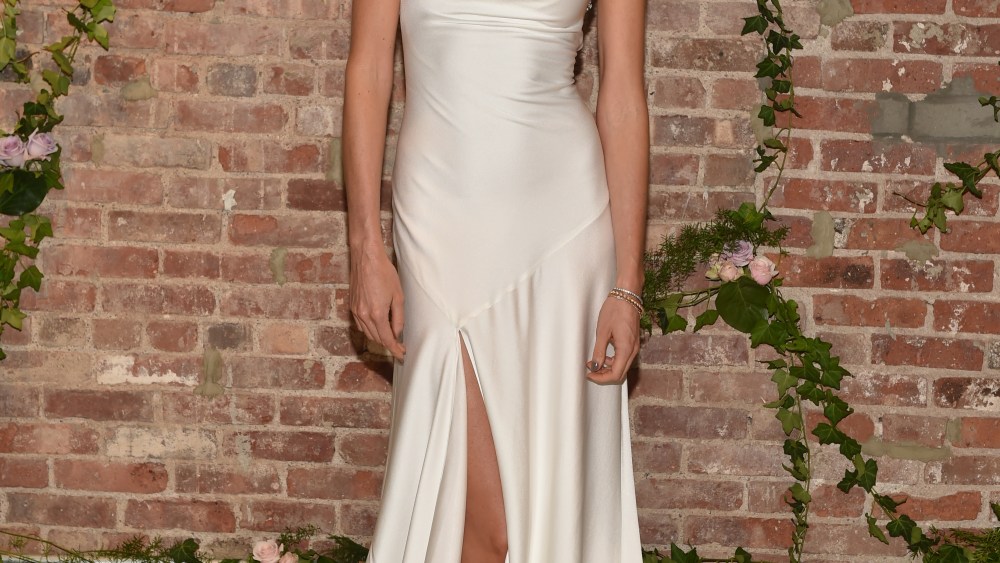 For each of the past five years, brides have increasingly spent more on their wedding gowns, and they are also giving the shopping process their full attention like never before.

Each month brides view on average hundreds, if not thousands, of images through The Knot Wedding Look Book app, and even more images via the company’s Web site and print magazines, according to The Knot editor in chief Kellie Gould. “Millennials are using their mobile phones for solutions more than ever — it’s the last thing they look at before going to bed, and the first thing they look at in the morning. It’s no surprise that this behavior of mobile usage is carrying over into the wedding industry.”

Brides are now investing on average $1,357 for their wedding gowns, compared to $1,281 in 2013, according to The Knot’s 2014 Real Weddings Study. To better connect with Knot visitors and bridal salons, the company revamped its site and apps to help brides-to-be to do her wedding research on-the-go, and to better connect her to bridal salons in her area that will allow her to buy that ideal dress, Gould said.

While images of wedding gowns have always been prime material for Instagram and Pinterest, the immediacy at which they are now being posted by bridal editors, bloggers and celebrity brides has retailers in overdrive racing to get just-off-the-runway looks and other gowns. “They’re not influenced as much by advertising per se. More than ever brides are influenced by what celebrities are wearing. When they see Kim Kardashian and Beyoncé in ultra-ultra sheer gowns at the Met Gala, that trickles into bridal trends,” said Mark Ingram, who has a Midtown Manhattan store. “They’re also being influenced by celebrities’ red-carpet looks. There’s this whole sensual, sexy look going on now. It’s as though how sheer and how nude can we go?”

Counter to that over-the-top Kardashian-inspired style is an undercurrent of “very classic, more pristine” styles, like Peter Copping’s column dresses at Oscar de la Renta, Angel Sanchez’s architectural dresses and Lela Rose’s “magnificently clean” brocade gowns, Ingram said. “This kind of beauty and fashion is not about embellishment. It’s more about the cut of the dress and innovative fabrics.”

All that smartphone browsing also means many brides are swift to root out the most competitive price, and some store shoppers aren’t shy about asking for discounts, Ingram said. “We are just offering the best service we can offer. We can’t really fight online prices. We take the time to really style her and to create an ensemble that is very polished and pulled together,” he said.

A few designers have found ways to develop moderate-priced goods while still catering to more refined shoppers. Through a deal with Sterling Jewelers Inc., Angel Sanchez has launched a collection of engagement rings. His offerings are available in 135 doors in the U.S. and will be in 300 doors within the next year. During the fall bridal market, Jenny Packham aims to reach more brands with a secondary collection of wedding gowns through a deal with David’s Bridal. With her considerably more affordable Wonder by Jenny Packham label, the Londoner joins the ranks of Vera Wang and Zac Posen, who also have diffusion lines sold in the 325-unit chain. The Pennsylvania-based retailer’s roster includes Oleg Cassini, Jewel, Melissa Sweet, Galina and other resources, as well as its own label.

Cassini, which also produces customized high-end wedding gowns, will open a Melrose Place store in Los Angeles before the end of the year. Geared primarily for eveningwear and elegant sportswear, the store will also offer shoppers the option of buying couture gowns. The company plans to unveil a Bal Harbour, Fla., store early next year, and is also looking into boutiques in New York and London.

Kleinfeld, the setting for the TLC reality show “Say Yes to the Dress,” is attracting more international shoppers, according to co-owner Ronnie Rothstein. “We’re in our 14th season,” he said of the reality show before Pnina Tornai presented her collection. “What the show has done is expanded the reach. We’re in 135 to 140 countries and it’s brought in more of an international customer.”

With bridal accounting for 60 percent of its apparel business, Monique Lhuillier held shows for both her signature collection and her more affordable Bliss collection in New York for the first time. Doing so means more Instagram-searching brides-to-be are calling the designer’s stores or showing up at trunks shows knowing exactly which dresses they want, said Tom Bugbee, the firm’s chief executive officer who is also the designer’s husband. With boutiques in New York and Los Angeles, Monique Lhuillier has the inventory to respond quickly, but that buying trend has been challenging for companies that don’t have “instant access.” he said.

The company added a bridal-specific Instagram account last year, after stores started asking the designer to post images of specific dresses and trunk show information. Lhuillier prefers to oversee that herself. “We also didn’t want it to look like a catalogue. We wanted it to be beautiful and inspiring,” Bugbee said.

Questioning the overall strength of the economic recovery in the U.S., Bugbee said international markets are strengthening growth. Lhuillier is looking to open a London or Hong Kong store next year. “The U.S. business is not really growing. Retail in general is not that great,” Bugbee said. “I don’t believe that the economy is as strong as we hear it is. The stores are certainly not feeling that or seeing the traffic.”

With Anne Barge planning for an 8 percent increase this year, projected wholesale volume is expected to tally $3.3 million, according to president Shawne Jacobs. The company “passed on trends that did not align with the brand,” preferring to emphasize timelessness and modern sophistication, Jacobs said. With price definitely being a consideration for stores, the fall price range of $3,000 to $6,810 has been “very well-received,” she said.

Another company making inroads is Victoria KyriaKides Haute Couture bridal collection, which debuted last year and is now sold in 10 stores. Having invested “heavily” in his company, more specifically its production infrastructure in Israel, Alon Livne said he expects sales to increase by 200 percent for her signature collection compared to last year. Noting the 2016 collection is the largest one yet, Livne said, “This year I hosted my first bridal runway that included almost 40 new styles. Brides today seem to be more open to new designs and ideas. Most will no longer settle for a ‘nice, white dress.’ They’re looking for something special and spectacular.”