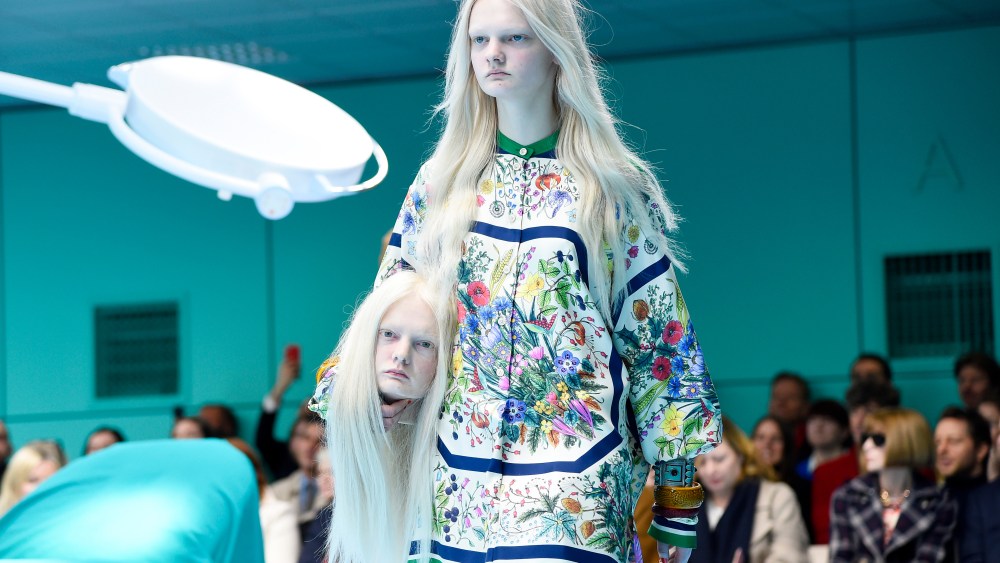 It seems forever ago, but it wasn’t. As it was happening and now, with hindsight of less than three weeks, fall 2018 resonates as a transitional season — a bellwether of changes essential to what has become an oversaturated and too-often underwhelming show circuit. Then again, one could say that about the past few years of runway seasons, and yet the changes don’t happen, and the shows go one. Happily, every season has its high points and its oddities.

Your Head in Your Hands — We’ve all heard the expression, but whoever expected to see it for real? Gucci’s show-opener, model Unia Pakhomova carrying her own head (for accuracy’s sake, it was a fake), proved the defining visual of the fall 2018 season. Presented within a brightly lit, antiseptic operating room installation, the show was compelling, confounding, weird and wonderful. In a post-show press conference, Alessandro Michele talked about being “post-human” and your own Dr. Frankenstein and parenting dragons — all whimsically heady stuff. Yet the best thing about what Michele is doing right now is that the clothes stand up to the shtick. To walk into a Gucci store is to come upon a retail derivation completely faithful to the promise of the show. The exquisitely produced clothes and accessories range from straight-off-the-runway gems to more sedate commercial variants. Extracted from the show’s kinetically out-there styling, the former are more wearable than you might think while the latter specifically and directly reflect the essence of the collection. Magical.

Speaking of Hospital Venues — A visit to A.F. Vandevorst’s pop-up shop/showroom in Paris also revealed a hospital-bed installation, a trope Filip Arickx and An Vandevorst introduced to their brand’s visual retail repertoire in 2010. But his interest long predated its application to the brand; Arickx said he started collecting hospital furniture when he was 12. (It’s what you call a niche interest.)

Power Play — Marc Jacobs closed the New York season with a bold, dizzying display of overstatement in silhouette, color and attitude, with a healthy homage to Saint Laurent along the way. To what degree Jacobs’ concepts make it to the retail floor remains to be seen, but his runway made an impassioned case for the power and necessity of real fashion.

Winning Formula — Buy-now-wear-now was a bust for most of fashion, but not for Tommy Hilfiger. He has not only stuck with the program, he’s taken it on the road, his itinerant zeal matching that of the major luxury brands with their pre-collections. This spring season found Hilfiger and collaborator-muse Gigi Hadid in Milan’s fairgrounds, once the epicenter of the city’s fashion season but long since abandoned by designers. In anticipation of his deals with Formula One World Champions Mercedes-AMG Petronas Motorsport and driver Lewis Hamilton (unsigned when he conceptualized the show), Hilfiger planned a runway extravaganza, complete with race cars, pit crews and Hadid looking plenty racy herself. It made for a good-fun, playing-to-the-masses joy ride — and a mega shopping op, as fans clicked and purchased throughout the show.

Up With Fashion — Fashion for fashion’s sake, not a cure for the world’s ills, but a lovely if temporary respite from them. That was the simple guiding premise behind Dries Van Noten’s ultra-chic collection in which he integrated utilitarian sportswear elements into his signature masculine-feminine dialogue, while not skimping on the embellishments. “No boundaries. Just, like, go for it,” Van Noten said.

Wander Lust — Accent on the fashion lust at 3.1 Phillip Lim and Prabal Gurung, as, inspired by the nomadic life (Lim) and personal travels (Gurung), the designers sent out nuanced, covetable collections that felt personal and inviting.

Between the Lines — At Loewe, Jonathan Anderson gave each guest a copy of a literary classic — “Wuthering Heights,” “Madame Bovary” and “Don Quixote” among them — their covers reworked with brand imagery shot by Steven Meisel. The point, Anderson said: “Classicism is always there…sometimes you change the cover and make it relevant for today.” He did so with a lineup of beautiful clothes that he kept calm and interesting — but for one or two flights of artisanal fancy. One left the show thinking that Anderson could fill the grounded-fashion void created by Phoebe Philo’s departure from Céline.

Let Them Wear Gray — Inspired by a portrait of Marie Antoinette and his own penchant for gray flannel, Thom Browne delivered a couture-level wonder.

Pop Goes the Linoleum — Muscle-memory podiatric confusion aside (not to mention the unusual sensation of salted grit embedded between hose and shoe), plodding through Raf Simons’ popcorn terrain at Calvin Klein was definitely memorable.

Balenciaga — Against a giant graffitied snow mountain, Demna Gvasalia went to extremes with pared-down simplicity and piled-on all-in-ones. His most daring proposal: sculpted hourglass suitings for him as well as her.

Nature Made (But Not Really) — At Chanel, Karl Lagerfeld installed a dense forest within the Grand Palais, its bare trees and thick carpet of fallen leaves announcing the fall season. So, too, did Lagerfeld’s palette — deep, earthen greens and oranges. Meanwhile, Valentino’s Pierpaolo Piccioli gave new meaning to an old term. His Flower Power exploded posies into giant graphics while remaining true to his romantic core. Piccioli’s point: “To turn the stereotype of romanticism into something bold and strong.”

Romeo, Romeo — Former WWD colleague — and friend — Mayte Allende embarked on a new career this season, turning her brilliant editor’s eye to design as creative director at Bande Noir, an advanced contemporary start-up. Allende’s impressive launch focused on wardrobe-building tops of elevated design, the kind “that I know people will notice,” she said. She drew inspiration from Romeo Gigli, tempering the romance while referencing his draping and off-the-shoulder cuts. Her interest proved timely. In Milan, Gigli himself made a comeback with a collection for the Italian company Eggs. His lovely capsule collection featured signature cuts — cocoons, cutaways, shoulder details — while hinting discretely at the exotic embellishments that imbued his most fantastical work with a feeling of otherworldliness.

The Lady Is a Camp Enthusiast — Rei Kawakubo musing on Susan Sontag musing on camp. Does it get any better? Oh, Comme, all ye faithful!

Mad for Margiela — “Margiela/Galliera — 1989-2009,” the Martin Margiela exhibit at the Palais Galleria was the must-see extracurricular of the season. The show reminded of the scope of Margiela’s ongoing influence: deconstruction, repurposing, the message T, experimenting with the technology of the day, alternative methods of showing — he did it all. He also emerged at a cultural moment, the peak of Nouvelle Society, when challenging convention felt like more than a marketing ploy. And he was an exacting technical master who could make gigantic clothes one season and clothes that folded into precise flat, 2-D configurations. the next. The show brought it all back, including how wearing Margiela’s clothes, those four white stitches that secured the blank label visible on the outside, made you feel insider, and maybe a little more interesting than you were.

The Eighties — They were everywhere. And with them, shoulder treatments, glitz and camp aplenty. There could be myriad reasons why. Coming up with anything genuinely new borders on impossible, a reality articulated over the years by no less valiant creators than Coco Chanel and Rei Kawakubo. But why this ongoing Eighties obsession now? Designers often turn to the iconography of the era in which they first became aware of fashion, whether through mom’s closet or the broader popular culture, so that could cover the interest of the thirtysomething designer set. Yet while we think of the Eighties as visually extreme, that decade and others may offer something of a safe haven, creatively speaking. Today, a large part of the panoply of inspirations from which designers have historically drawn — specifically, regions and cultures other than their own — is riddled with potential pratfalls; everyone fears fallout from accusations of cultural appropriation. As designers become increasingly skittish about invoking references that could be perceived as unacceptable, good (or bad) old-fashioned retro may become even more prevalent, if that’s possible.

Speaking of Eighties — Nothing to do with the collections, but New York politics experienced a little Eighties retro of its own this week. One-time “Sex and the City” gal Cynthia Nixon announced her candidacy for governor. One-time mayoral candidate Christine Quinn called her “an unqualified lesbian.” Quinn apologized (but not for the “unqualified” part). Nixon tweeted, “It’s true that I never received my certificate from the Department of Lesbian Affairs, though in my defense, there’s a lot of paperwork required.” Sounds like a good old-fashioned catfight — like back in the un-p.c. day when you could still use words like catfight. If I had more guts, I might say just like Crystal and Alexis, only updated with the “L” word. But I don’t, so I won’t.