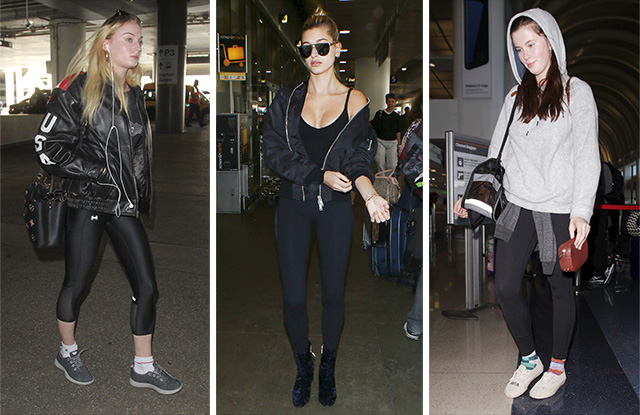 Fly the friendly skies. In the wake of United Airlines vs. Girls in Leggings, the slogan (revived by the airline in 2013 after a 17-year hiatus) must seem patently incorrect to those who rushed to excoriate United via social media over the incident. Those people should get over themselves.

They should also get their facts straight, which many who went immediately nuts didn’t do on Sunday before tweeting about something going with total strangers at a United gate in Denver. Obviously, there are times when, as the MTA PSA says, “If you see something, say something.” This wasn’t one of those times — not without certainty of the particulars. Today, everyone is photographer, videographer and general cultural critic and, by virtue of those conditions, also a potential Insta-crusader, at the ready to redress a wrong. Sometimes all it takes is a perceived injustice playing out nearby, no matter how inconsequential. Hence, Leggingsgate.

In this era of relentless celebration of self, there’s a knee-jerk tendency among the easily aggrieved righteous to express horror that anyone — or worse still, a non-human entity like a company — would dare judge clothing choices or impose standards that in any way restrict self-expression. Shocking! Reactionary! Fashion fascism! This is especially so when the message, either implicit or explicit, targets looks deemed excessively sexy, and thus inappropriate for whatever situation, by the entity setting the rules.

Organizations and businesses have long exercised the right to impose wardrobe and other standards on their employees. Disney has a boatload of restrictions for theme park employees. The Yankees cling to their specific mandates regulating facial hair and no-hair-below-the-collar, we-don’t-care-how-big-a-star-you-are (see Clint Frazier). Both have been lauded and mocked for their positions, and Disney has faced legal challenges, leading to some religious exemptions. One can argue right or wrong, stodgy or not, but historically, workplaces are not democracies.

United doesn’t want off-duty employees who fly for free on passes or those to whom they’re allowed to extend those passes to wear spandex. No, change that. United employees don’t fly for free exactly, because “free” implies no strings. United employees and their guests may fly on passes for which they do not pay money in exchange for adherence to previously specified criteria. If the flyers deem the no-charge worth the imposed conformity, up, up and away. If not, one assumes they can opt out of the perk and purchase tickets like everybody else.

That the Denver banning involved teenaged girls and Lycra made for a perfect storm of controversy. The biggest drama: cries of sexism. Shannon Watts, who took the incident public, tweeted her outrage after observing the commotion from a nearby gate. She then wrote an op-ed for the Time blog Motto, published on Monday, that began, “This weekend I was reminded of how deeply ingrained sexism is in our culture: People still believe it’s acceptable to police the clothing of girls and women.” Huh? Two teenagers were denied access to a plane for violating the terms of an employee policy through which they were flying free. The mother of a younger girl, who also didn’t know what was going on, then feared, completely erroneously, that her daughter would be barred as well, and so pulled a dress out of a carry-on. Watts then writes that the third girl’s father “had no issue boarding in shorts.” Were shorts-wearing women barred from the flight?

Yes, sexism exists; in many arenas, it flourishes. But how many frequent fliers have experienced or witnessed a single instance of sexism as manifested in who is and is not allowed to board a plane based on their outfits? Thank God that the fashion aspect of gender fluidity hasn’t yet reached the point where men run around in Lycra to the same degree that women do. We don’t know if a pair of teenage boys dressed in leggings or bicycle shorts, the outlines of the family jewels on tightly sheathed display, would have been denied boarding rights. Until someone shoots a video of such a pair settling into those free-pass seats in the back of the plane, maybe United should get the benefit of the doubt. To turn one employee’s literal enforcement of a house rule — one which many employees apparently consider part of an appealing perk — into a cause célèbre trivializes the trauma and danger of real sexism.

Still, the likelihood is that the two banned girls looked just fine in their leggings, with no Lululemon transparency or other naughty transgression in play. So barring blatant visual impropriety — and none was reported, even by the slim percentage of devil’s advocate types on social media — why the contretemps at all? This particular gate agent sounds like a zealot; it’s unrealistic to think that no United employee or family member has ever settled into a free-pass seat wearing leggings, and surely, the agent could have turned a blind eye and let the girls board.

That’s unofficial discretion, and who would have been the wiser? Instead, the agent chose to enforce the letter of the rule — the kind of rule that as written must be black and white, with zero room for judgment calls. Some leggings are yoga pants and some are footless tights, the latter not intended to be the primary garment separating tush from airline seat. Tell that to a teenager. And, sorry PC police, but body type changes perception. Can you imagine if a gate agent had the explicit official discretion to make the call: “Kendall, you’re skinny. Your leggings and tank top are fine; welcome aboard. Kim — too sexy! Go home and put some real clothes on.” Oh, Lord.

Sometimes, your personal aura isn’t just about you. And sometimes, life lessons present in the oddest of places. One assumes that these two girls were not fully informed of the dress code for flying under the employee perk, or if they were, they didn’t grasp the seriousness of the rule; they were apparently well-behaved when denied boarding. The bottom line is that accepting a pass ticket is a transaction that carries with it a responsibility: willingness to adhere to a clearly stated code of behavior. You can opt in or out. You can’t always have things 100 percent your way.

That’s not a bad realization for teenagers. It’s certainly more useful than Chrissy Teigen’s tweeted assertion that, “I have flown united before with literally no pants on. Just a top as a dress. Next time I will wear only jeans and a scarf.” Good for you, Chrissy Teigen. And that is instructive for the non-celebrity, non-beauty teenager exactly how?

At worst, invoking the leggings tempest as an example of society’s rampant sexism is irresponsible and unfair to United. Seen through a lighter lens, it’s just silly.

Either way, it’s not without significance for the fashion industry, which should applaud United, if only out of pure self-interest. Over the course of the 20th century, social dress codes evolved from staunchly formal to informal and fluid and now, to virtually nonexistent, victims of a confluence of cultural factors including the ever-increasing casualization of everyday life. It’s unlikely that United’s zealot gate agent gives a hoot about the woeful state of the fashion industry. But his/her strict enforcement of the employee pass rule provided a reminder that in some rare occurrences, leggings just won’t do. In other words, there are reasons to go out and buy some clothes.
____________________________________
Addendum: A plane is a fraught environment for many reasons. Fear, stale air, cramped quarters, usurped overhead storage, restrooms that telegraph their overuse — it doesn’t bring out the best in most of us. Anything that lessens unpleasantness, including sensible clothing choices, is a good thing. This isn’t an exact parallel, but I once sat behind a man who played with his dirty-looking feet through much of the flight. (That is, assuming he’d worn shoes onto the plane; I never confirmed.) No kidding. If I’d been next to him, I don’t know what I would have done on the full flight with nowhere to move; as it was, the view from behind was disgusting — feet on the divider, pick-pick-pick. Would that a flight attendant had come by and said, “Sir, Delta has an antitoenail picking policy above 10,000 feet. We ask that all passengers observe it.” Didn’t happen. (I never got a good look at the man’s face, but when I got off the plane I saw a driver holding a card with the name of a well-know industry figure. It could have been…)