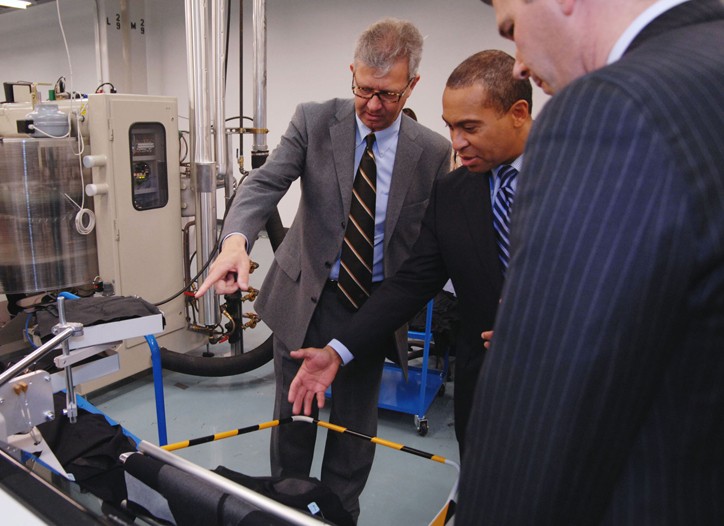 HAVERHILL, Mass. — Amid the recession and job losses, the Brooks Brothers-Southwick marriage is about as good as it gets.

The 80-year-old suit manufacturer was rescued from collapse in July by its biggest customer, Brooks Bros., which bought the business, designed a state-of-the-art factory for it and retrained all 315 employees to work there.

“There is a lot that can be made here in the U.S.,” Claudio Del Vecchio, chairman and chief executive officer of Brooks Bros.’ parent company, Retail Brand Alliance Inc., said Thursday after a ribbon-cutting ceremony attended by Massachusetts Gov. Deval Patrick. “People have given up on the idea, but it is possible to make the economics work and get quality product.”

The goal is to manufacture 70 percent of all Brooks Bros. tailored clothing here, said Diane Hamilton, the retailer’s president and chief operating officer.

Southwick, which makes suits, sport coats and trousers, is the final link in Brooks Bros. made-in-the-U.S.A. portfolio. Ties are made in Long Island City, N.Y., and shirts in Garland, N.C. Emphasizing domestic manufacturing will be a big part of the company’s marketing, Hamilton said.

To align Brooks Bros. around that message, teams from the chain’s product development and retail operations will visit Haverhill to see clothes being made.

“We want to get our people to understand why we’re committed to the U.S. production,” Hamilton said. Eventually, the factory will have a showroom on the second floor to service Southwick’s wholesale accounts.

Gov. Patrick said saving Southwick and the new factory “gives us, in these tough times, a reason to hope.”

In addition to having the factory produce more Brooks Bros. garments, Del Vecchio intends to grow the Southwick brand, which is sold to 150 specialty stores, to 40 to 45 percent of Southwick’s total revenues from 20 percent. Space is earmarked on the factory floor for another production line. The goal is to add jobs over the next five years.

The town of Haverhill, which hasn’t gained this many manufacturing jobs since Western Electric arrived in the Fifties, gave the company its biggest ever tax incentive, Mayor James Fiorentini said. Massachusetts kicked in more than $400,000 in training grants.

The Southwick overhaul is costing Retail Brand Alliance about $20 million, said Del Vecchio, with much of the cost coming from equipment customized for the brand’s signature soft-shoulder construction process.

Southwick previously operated on five floors in a turn-of-the-century factory in nearby Lawrence, Mass. Workers hand-carried piece goods up stairs or waited for clanking elevators to arrive. It took six weeks to make a suit, with machinery powered by a colossal steam boiler tended round the clock by two people.

The affection for Del Vecchio, who paused during the press conference to turn to the workers and thank them in Spanish, was palpable, with enthusiastic applause and workers crowding around him afterward to have pictures taken.