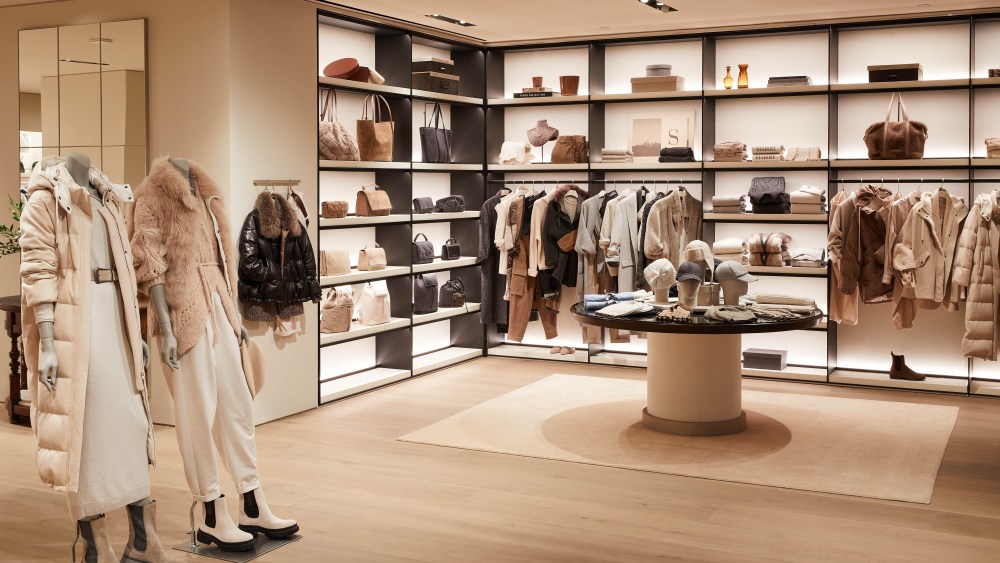 Brunello Cucinelli believes in New York, and the company has made a major statement about its confidence in the resiliency of the city by doubling the size of its Madison Avenue flagship.

The store, which opened more than a decade ago, has been expanded to nearly an entire city block at 683-689 Madison Avenue (at 61st Street), allowing the company to better showcase its entire brand offering.

“It’s 8,127 square feet — a true flagship store,” said Massimo Caronna, the president and chief executive officer of Brunello Cucinelli North America, who said the company was able to obtain the space next door that formerly housed Bally in order to expand.

The renovation began in February of 2021 during the height of the pandemic and the store remained open during the process. There are eight windows on Madison Avenue, separate shops for men’s, women’s, children’s and lifestyle collections, as well as a VIP fitting room and a bar area.

“We opened on Madison in 2010 and the location proved to be a great choice for the brand aesthetic and clientele,” said Caronna. “It became our flagship and our most important store worldwide.”

All told, the company has 113 stores around the world and 33 in North America. And while the brand started out as wholesale-only, retail now accounts for 53 percent of its overall sales, he said. “It was always my dream to have a split between wholesale and retail,” he said.

“As we expanded into lifestyle, children’s wear and accessories, we thought it was important to find a larger footprint to showcase all our offerings,” he said of the Madison Avenue store. The larger space allows the brand to service both new and existing customers within specific dedicated areas and also provides a “sense of privacy to shop comfortably,” thanks in part to the two separate entrances, one for men and one for women. “Privacy today is luxury,” he said.

The store also allows the brand to expand its sportswear offering as well as men’s made-to-measure clothing and to better showcase seasonal offerings. “Every season, we aim to bring novelty to our collections,” he said.

The store offers the new eyewear collection with Oliver Peoples, the first time Brunello Cucinelli has partnered with another brand, Caronna said. Carolina Cucinelli, co-president, co-creative director and daughter of the founder, worked closed with the eyewear company to create the collection, and “we’re happy with the results,” he said.

Caronna said the store will offer made-to-measure appointments and trunk shows and will host events and charity collaborations. There will also be opportunities to hold private lunches and customers will be encouraged to visit the bar for an espresso or wine. “We want them to feel like they’re coming to our home, more than just a Brunello Cucinelli store,” he said.

The store design features natural tones of oak imported from Italy with metallic and material surfaces. A mix of antiques, such as 19th-century haberdashery piece from the Veneto region and a two-level desk from a tailor’s shop in Bologna, are juxtaposed with more modern elements.

And the boutique is segmented into areas intended to be reminiscent of an Italian home, including a library, living room and study.

“The physical boutique will always play an important part for the brand,” Caronna said. “It’s always made a difference for us to be able to connect with clients and being in-person allows us to build the relationship.” He said it’s also helpful for staff to walk the customers through the collection and style them in the most appropriate way.

Caronna said that although the lockdowns and store closures at the beginning of the pandemic were “very challenging,” the company believed that ultimately things would rebound.

“We took a stand in New York and believe there’s such tremendous energy here.” He said the brand continued to stay in contact with its customers, offering Zoom calls with the founder, and other digital events to “keep them connected.

“We came out more resilient and more connected,” he continued. “Brick-and-mortar is even more important now.” And while the e-commerce arm of the company grew during the pandemic, he believes that having both a physical and digital presence is the key to success. “They complement each other,” he said. The brand also expanded its stores in San Francisco, Chicago and Las Vegas during the pandemic.

Looking ahead, Caronna said the company just signed a lease to open a store in Palo Alto, Calif., next year, along with Scottsdale, Ariz. A new store in Chicago, which opened late last month, has performed well, and while there are no plans for a large retail rollout in the States, he said that where demand is high and there’s an opportunity to obtain a retail space with the square footage necessary to showcase the entire collection, the brand will consider adding a store.

There are also opportunities to work with wholesale clients to create “mini areas within stores,” for specific product categories such as the Neverending Stories sustainable cashmere collection, he said, a move that also allows the brand to “attract a younger customer as we move forward.”

In addition to the Madison Avenue store, the brand is also debuting its Casa Cucinelli concept in New York City this fall as well. The private client experience will offer customers the opportunity to shop the collection and personalize their wardrobes in an intimate setting outside of the retail store. The New York location joins others in Milan, London and Paris with Tokyo and Shanghai planned for the future.