Brunello Cucinelli’s love affair with America is in full swing.

He was the guest of honor Wednesday night at a cocktail party and dinner thrown by the Hirshleifer family at their new Brunello Cucinelli boutique at the Americana Manhasset. Before the party, WWD sat down with Cucinelli, and through an interpreter, spoke about his whirlwind five-day U.S. visit, spent mostly meeting with financial investors in Boston and New York and socializing with key clients.

The 62-year-old Cucinelli was his animated self, professing his deep love for the American market, which he called his biggest in the world, accounting for close to 37 percent of the business. It’s twice the size of the Italian market, his home base.

“We have enjoyed a staggering year, a very beautiful year,” said Cucinelli, describing his U.S. business. For the nine-month period through Sept. 30, North American revenues increased 25.4 percent to $126.8 million. “I am full of gratitude towards the American people because from you, I have learned business and have also learned a lot from your culture [books, writers, poetry, etc.].  Every time I come back to Italy from America, there’s always a nice idea that springs naturally to my mind,” he said.

For the year ended Dec. 31, 2014, Cucinelli’s worldwide revenues gained 10.4 percent to 355.9 million euros, or $473.3 million, as reported last March. Cucinelli said that the firm is on track to experience double-digit gains this year. In North America, there are currently 18 freestanding stores (including one franchised one at Hirshleifers), and new units have recently opened in Vancouver and Palm Beach, Fla.  Next year, the company will open one more store in North America, but he declined to divulge its location. In addition to the 1,750-square-foot Cucinelli store at Shop at Hirshleifers in Americana Manhasset, the company wholesales its collection in the U.S. to such stores as Saks Fifth Avenue, Neiman Marcus, Bergdorf Goodman and Barneys New York.

Caryn Hirshleifer, vice president of legal at Hirshleifers, said the store has been carrying Cucinelli for about six years, and moved the collection into its new location in October. “It has been performing extremely well in its new space. The brand is a luxury brand that demands a presence on the Northern Boulevard side of the center, and the design of the space is simple, soft and elegant. It lets you focus on the clothing and accessories and their textures and feel. The move has given us the chance to show the brand in a space that it deserves, and it has translated into a very healthy increase in sales,” she said.

Cucinelli said he enjoys doing business with the Americans because he finds them more serious. “I’m in love with my Italy. In the U.S., they are more precise. The mood and spirit have changed in Italy. There is really a rebirth taking place, from the moral, the civil, the spiritual, the religious, and economic point of view, too. It’s a very good time and momentum for Italy,” he said. Still, he said he is pleased that the American market has warmly embraced his sporty-chic apparel.

In addition, the “Made in Italy” label has been very well received, said Cucinelli. “As far as we’re concerned, we consider the American market kind of a domestic market for us. The taste is very similar, it’s like the European taste. At this point, there’s no difference compared to 25 years ago. Basically, they’re the same,” said the founder, chairman and chief executive officer.

Cucinelli said he receives no backlash from customers to the luxury price points of his collection. He said he prefers to use lightweight materials because it’s so warm everywhere one goes — in offices, on planes and at home, and it becomes a more expensive proposition. “It’s more difficult to process very lightweight materials, because they’re more fragile,” he said.

The company has 1,400 direct employees at its factory in Solomeo, and 3,500 contractors, who operate as micro-artisanal businesses. “I want to provide an expensive product, but at the same time, you perceive the high grade of craftsmanship and the manner of skills. It’s a typically artisanal product, with a lot of craftsmanship. We are an industry, but I like to call myself a craftsman,” he said. The company is also focused on maintaining human dignity in the work environment, a passion very close to his heart.

Cucinelli said when the Hirshleifer family asked him to open a monobrand franchise within the complex, “I was very pleased to receive this request. The Hirshleifers run one of the best multibrand stores in America. I’ve known them for many years. They’re a close family and very serious,” he said.

Today, women’s comprises 67 percent of the Cucinelli business, with the remaining 33 percent men’s. Cucinelli said he doesn’t plan to add any new categories. “Hopefully we’ll design a beautiful fall collection,” he said. “That’s what matters the most. Your collection must be new every six months when you design it,” he said.

The ceo said he’s excited about his company’s Web business, but said the percentage today “is pretty ordinary” but sees that changing soon. “I am convinced that it will become important and a game changer for mankind,” he said. It’s been two years that they’ve been focused on their Web project, which is present through Net-a-porter and operated by Yoox. For some brands, the e-commerce site is the number-one store. “Not in our case,” said Cucinelli. “Our number-one store in the world is Madison Avenue.

“The Internet is very important, and I believe in this channel very much,” he said.

He also said the Chinese business is still “a very limited market” for the company. “Things are going pretty well there. I have the feeling the Chinese are appreciating the exclusivity of the product. I think that this market will become the market of the next decade for mankind. Because it’s really the century of China,” he said. He noted that the previous century was America’s, and the one before that was Europe’s.

Cucinelli, whose business went public in 2012, is clearly pleased with that decision.  “I think it’s a great experience going public.” He said investors and analysts like to offer advice. “Yes I try and listen to them. Sometimes when you’re successful you’re not always inclined to listen to others. I’m very happy that the majority of my investors — 55 percent — are U.S. funds such as Fidelity, Capital, Oppenheimer and Wellington.”

Flying back to Italy on Friday, Cucinelli said he’s eager to spend Christmas at home. “I live in a small hamlet. I was born and bred in a village, and it’s something very special to me,” said the ceo, who grew up in a poor family and started the business with no money. Asked what he’d like to receive for the holidays, he said, “When I receive books, I’m always happy. I also give books as gifts. That’s my big passion. Books have always shown me the way in life.” 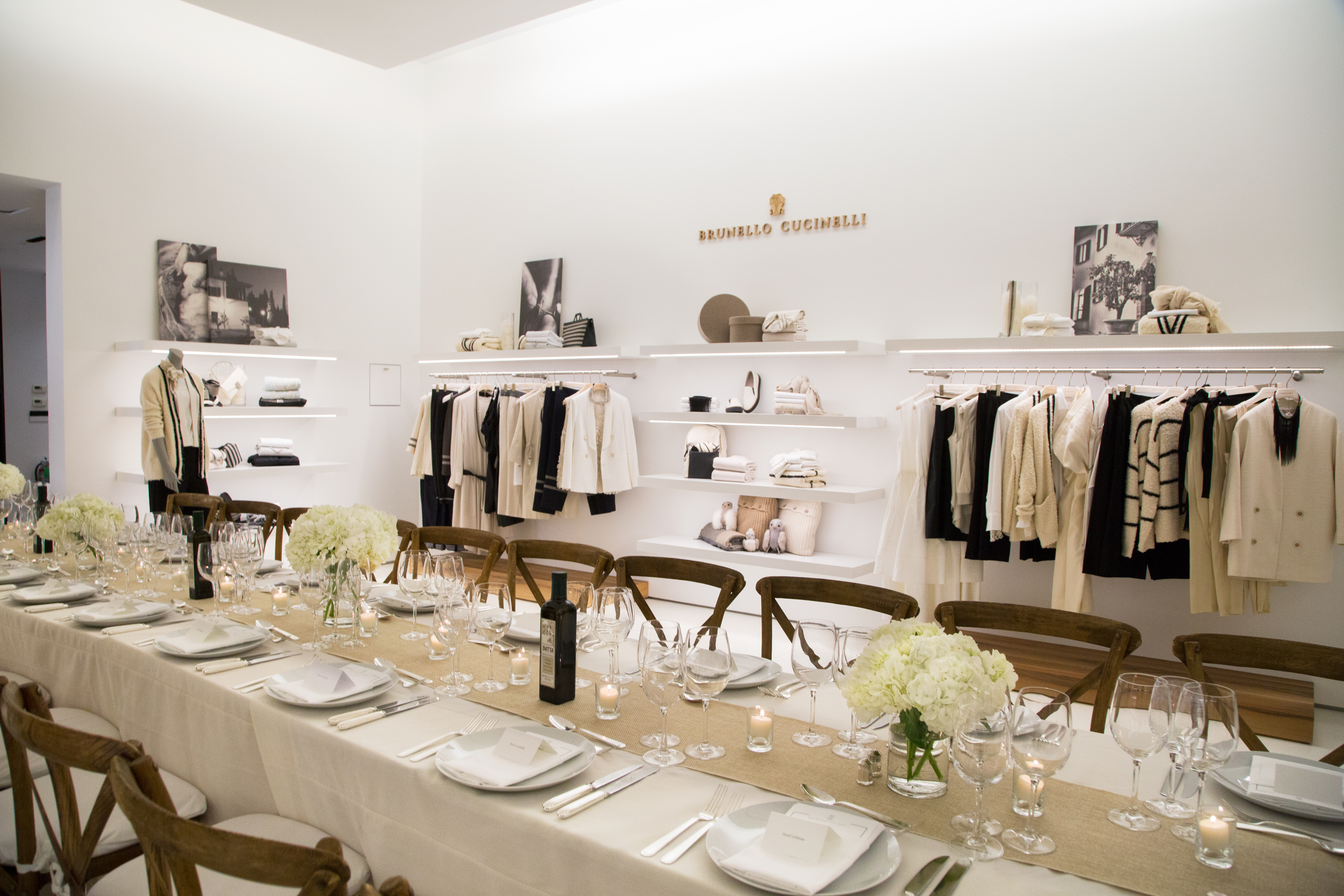 Setting up for the party at the Brunello Cucinelli store at the Americana Manhasset.