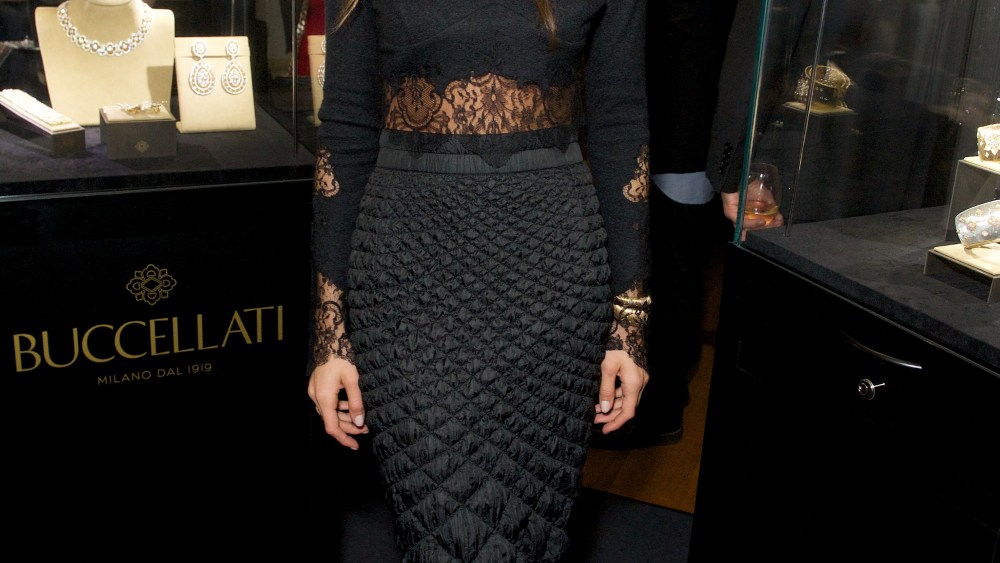 OPERA NIGHT: Buccellati gave Spencer House a dose of palazzo pizzazz Wednesday night with a party to mark the launch of its Opera Collection in the U.K., pieces of which were displayed in the neoclassical rooms of the grand London town house.

Stationed at one end of the terrace were chefs from San Marco, a restaurant in Canelli, Italy, who had been flown in to prepare buttery tagliolini and steak tartar, covered in shavings of white truffle, six kilos of which had been flown into London at a cost of 24,000 euros, or $27,100 at current exchange rate.

At the other end of the terrace, a cocktail bar was decked with sprays of sage and rosemary, which bartenders used to mix herb-y cocktails for guests. The bar overlooked the garden, where kaleidoscopic images of the jewelry were projected onto a curtain of water.

Andrea Buccellati, president of the Milanese jeweler who codesigns the Opera collection with his daughter Lucrezia, said it was high time the brand held an event in the British capital.

“We’ve had a store here for nine years and we’ve never really had a party to say ‘We’re here,’” he said. “We also want to show Opera to a younger generation, to show the artisanal techniques — the honeycomb work, the engraving — on the jewelry. These are pieces for a younger generation, simple jewelry they can feel comfortable wearing.”

Elisa Sednaoui, the face of the Opera campaign, said despite critical acclaim for her role in the Italian ensemble comedy “Soap Opera,” she’s not about to turn full-time actress. “I love my life too much to be running away from it all the time to make films. I have a young child and a husband who needs me,” she said. “Also, I find it a very difficult business; it’s very corrupt in many ways.”

She said her true passions are diplomacy and philanthropy. “I never wanted to be a model or an actress, I always wanted to be a diplomat,” said Sednaoui, whose foundation is an educational and cultural platform for children. “I wanted to work in Egypt, where my father still lives, and so we have set up a model for cultural centers that offer a program of after-school arts activities. The important thing is that they can be replicated and adapted everywhere in the world.”

Lady Victoria Hervey was back in London from L.A., where she has several irons in the fire. “I have three books coming out,” she said. “They’re fiction, but loosely based on stages of my life.”

She said she’s also working on a documentary about a stash of lost treasure in the Caribbean, and a collection of luxury handbags. “There are 17 styles and they’re being made at the same Florentine factory that makes bags for Tom Ford and Céline,” she said.

Other guests at the party included Saffron Aldridge, Greg Rusedski and Rankin.

Earlier that night, Mount Street tailors, the Rubinaccis, were mixing business and pleasure. The brand threw a party at its store to celebrate 10 years on the hot Mayfair thoroughfare. It was a strictly Italian affair, with abundant prosecco and heaving platters of prosciutto, bruschetta and morsels of Parmesan broken straight from the wheel.

The store is located next to Marni and Parmigiani and across the street from Scott’s restaurant. Mariano Rubinacci remembered a time when his store was the only fashion outlet on the street.

“Whenever I come to London, I stay at The Connaught and I always thought this was the best street in the city,” he said. “When we opened there was nothing but antique stores on the street. Even Scott’s was closed then because of the two IRA bombings there in 1975.”