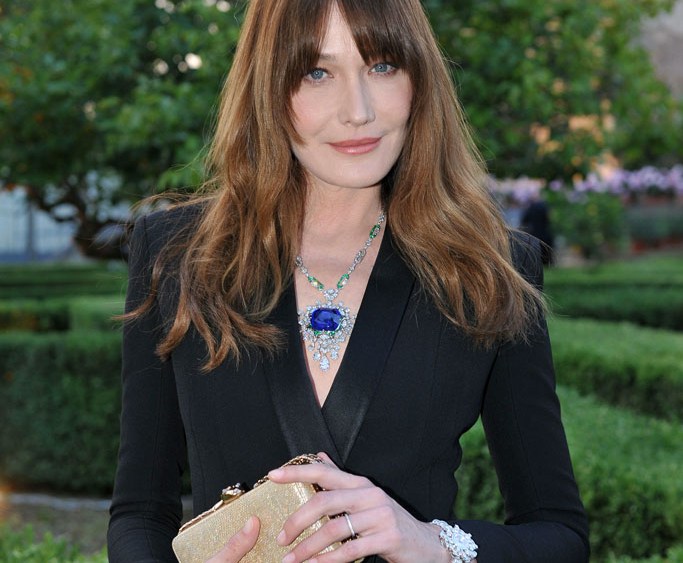 “It’s difficult to read the market, but it’s very favorable for us,” said the ceo, who attributed the solid performance to Bulgari’s display of “creativity, boldness, audacity and unexpected designs. We showed no less than two collections last year, with a creativity above our competition.”

To display such creativity, the Rome-based group for the first time presented to the press its new fine jewelry collection, called “Giardini Italiani,” or “Italian Gardens,” at Villa di Maiano in Fiesole, outside Florence, on Wednesday evening. The collection, which comprises 100 unique jewels inspired by the art of the garden, is evocative of the geometry of hedges and flowerbeds dating back to the Italian Renaissance. It will be shown to the brand’s major clients on Thursday. A few pieces of “Giardini Italiani” were previewed at the Cannes Film Festival in May, worn by Naomi Watts and Sienna Miller, for example.

There is also a selection of watches, the “Geometry of Time” line.

“Coming to Florence was a no-brainer as gardens are the driving theme of [the collection], and this is the area with the highest number of gardens,” said Babin.

Previous client presentations were held in exclusive locations such as Como and Portofino. “We are identified with Rome and Italy,” he said.

Babin underscored how Bulgari, which is owned by LVMH Moët Hennessy Louis Vuitton, “needs to be a leader in fine jewelry, a world signature, showing the best gems in the world, the purest, the brightest.”

He noted that prices of the pieces go up to 1 million euros, or $1.1 million at current exchange.

The pieces require patience and time to make, Babin said. For example, the “Blue Iridescence” necklace is created with a set of sapphires, contrasting with pink spinels and festoons of diamonds, that were acquired by Bulgari in various parts of the world. “They look like they were extracted together, but it took years to match and find the perfect pairing,” said Babin, pointing to a necklace made with 1,000 carats of emeralds.

While the collection is marked by colored stones, which are Bulgari staples, there are more diamonds, and Babin said the company was “rebalancing to be competitive, in colored stones but also to be equally attractive in the diamond market.”

He observed how Bulgari combines “art and nature, the first through the work of designers, gemologists and artisan jewelers, and the latter embodied by the precious metals and stones.”

Babin also remarked on Bulgari’s business, balanced across markets around the world. “We are not over-dependent on one area, we are not putting all our eggs in one basket, and we are seeing a steady performance,” he said.

While not providing any financial figures, he said he “[knew] Bulgari is outperforming its competitors,” based on their reported numbers. He pointed to Japan and China, as well as the destinations the Chinese travel to — Italy, France and the U.K. — as strong regions for the company. “We had a good start in Brazil, and we recently opened two new stores in Russia.”

Bulgari opened its first unit in New Delhi in 2014 and is entering Iran this year, which, he said, is “very rich.” The Middle East is “one of the best performing markets, and we’ve acquired our partners, “ said Babin, which allows the stores to carry a wider range of products.

Last year, Bulgari opened 15 boutiques and the plan is to match this figure in 2015. Asked about pricing policies, he said “prices have been unified globally, based on the euro and translated in local currency [the day of the sale].”

Babin went on to praise Carla Bruni-Sarkozy, who is fronting Bulgari’s latest ad campaign for the third time, as “a lady of culture. She’s Italian, she has character and substance, with her own career, she is independent and has a stylish look. She is very emblematic of Bulgari.”

Bruni-Sarkozy attended the show event and gala dinner on Wednesday night at the 16th-century Villa di Maiano in Fiesole, with a stunning view over Florence. “I am 47 and Bulgari makes jewelry for women, not for girls, and it’s not commercial, the craftsmanship behind each jewel is amazing,” said Bruni-Sarkozy as models wearing the new collections meandered through the perfectly tended gardens of the villa at sunset.

Bruni-Sarkozy herself, donning a Balmain pantsuit and vintage Yves Saint Laurent sandals, was wearing a necklace with a 125-carat sapphire.

But the singer and former first lady of France isn’t eying a foray into designing. “I can only write songs and I go back to my old job as a model for Bulgari.” Speaking of her previous career, Bruni-Sarkozy turned wistful, recalling the “insouciance” of times past, modeling for Gianni Versace, for example. “People would know the names of models, we would all know each other, we were like a family,” Bruni-Sarkozy said.

Bulgari brand ambassador Luke Evans gamely posed for selfies and said he was flying back to London after the event as he is filming “Beauty and the Beast” with Emma Watson, out in 2017. “I play Gaston, it’s the most fun I’ve ever had,” he said.

Next up: Bulgari is to hold a couture show on July 7 in Paris.