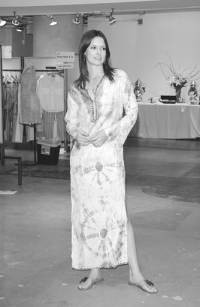 LOS ANGELES — An unexpectedly strong turnout of retailers hit the year’s first market week here, Jan. 16-21, with a renewed optimism in summer trends and an impressive display of order-writing.

Buyers who had been conservative with their core spring buys now were more inclined to write on “instinct” items: Tie-dye or gold-embroidered tunics, short military jackets, cropped cargo pants with sashed waists and drawstrings at the calf, kimono tops in vintage-style prints, miniskirts.

Some vendors surmised that buyers’ bullish behavior was simply a matter of playing catch-up. Many had waited until this market to place spring orders for February through April deliveries.

“People did a lot of previewing at the last market,” observed Michele Thornton, representing Syrup and Mange Denim. “A lot of my buyers weren’t about to write until they were through Christmas. Since they have to put pen to paper for spring, there’s still a lot of business to be done.”

Velma Reichman, an owner of misses’ showroom Reichman Associates, said her business is up 30 percent compared with the same market last year, and she planned to see up to 200 accounts by market end. “I’m not hearing much caution,” she said, noting buyers are picking up low-waisted flair pants from Fibers by Barbara Lesser and ruched and pleated white and black shirts from Nero Bianco. “They’re writing good-sized orders.”

That’s not to say the one-two punch retailers suffered over the holidays isn’t still smarting.

“Retailers are still cautious,” said Los Angeles manufacturer and boutique owner Lotta (who goes only by her first name), noting that the fittest are surviving the economy. “I’ve had several stores canceling orders and closing their shops,” she said. “They’re definitely carrying calculators, whereas before they were shopping their knickers off.”

Buyers, meanwhile appeared split between two camps: those who sought items at the lowest possible price points that have a longer trend shelf life, and those who picked up higher-end novelty items to generate consumer excitement.

Some subscribed to both concepts. “Women are extremely item-specific,” observed Cynthia Rae, owner of a namesake boutique in Excelsior, Minn., catering to a contemporary and plus-size clientele. With a 10 percent uptick in her open-to-buy, Rae ordered capris, cami tops and sundresses that wholesale from $30 to $60. But she noted being cost-conscious only goes so far. “Women are getting ‘Targetized,’” said Rae, and are afraid to “dress out of the box.” She sought some specialty pieces at $90 wholesale to spruce up her merchandise mix.

“I’ll touch pretty lightly on the trends and stick to classics,” echoed Susan Kerr, owner of La Femme Fatale, a contemporary boutique in Telluride, Colo., whose business is up 20 percent, thanks to a comeback of leisure travelers after 9/11. Noting even an affluent traveler looks for value, Kerr sought novelty print slip dresses, silk georgette bias-cut skirts and novelty sweaters wholesaling in the $35 range. She also planned to pick up cargo pants and novelty sweaters at around $100, noting, “You have to have that mix in a broader range of price points to attract more buyers.”

“Buyers are coming off a tough year and they need to get creative to generate business — more colorful and fresh, narrow buys rather than safe and deep,” said Barbara Kramer, co-producer of Designers & Agents Annex, which took place at the New Mart. Exhibitors doubled to 59 booths compared with the same market last year.

Not surprisingly, buyers weren’t that enthused on indigo denim. But they did pick up a fair amount of white denim. At Alice & Olivia, buyers ordered red-and-white-striped jeans and white denim pants embroidered with flowers or martini-printed waistbands. “Everyone has a customer that’s sick of wearing jeans,” observed Stacey Bendet, designer for the New York-based line.

Accessories are still going strong, touted by buyers as a thrifty way to update a wardrobe. Susanne Estrada, partner in Jophiel Design, here, with her sister and designer Theresa Estrada, showed baguette-style clutches in tangerine, buttercream and china blue leather with vintage precious stone clasps. The line is priced from $200 to $300. Susanne Estrada said they signed 25 new accounts during the weekend. “I’ve ended up with a bigger stack of business cards than I have since we started selling.”

Even novelty swimwear is getting a fair amount of attention. Rosa Cha, a Brazilian line endorsed by Naomi Campbell, brought 200 pieces of stock to market. Every item, ranging from $34 to $48 wholesale, sold out.

Marcus Laxamana, general manager of West Los Angeles boutique H. Lorenzo, said there’s pressure to offer trend-right casual pieces so customers can ramp up with a designer bag or shoe. Cargo pants with sash trappings at the waist and ankle in olive drab or pink satin, and diaphanous blouses and dresses with kimono-style sleeves topped his must-have list. “It’s fair to say business is still soft,” he said, declining to reveal his budget. “But if it’s something they can’t live without, they’re going to buy. Finding that something is our challenge.”