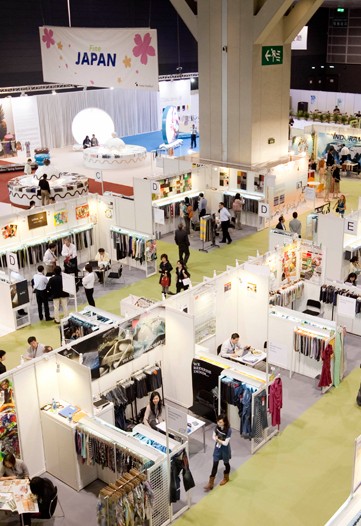 Many of the 163 international exhibitors showing at the three-day fair that ended March 20 said converting buyer interest into orders was difficult, although event organizer Messe Frankfurt said visitor turnout was up 11 percent to 7,000 from last autumn’s show.

“Everyone is shopping around these days to get the best deals, but there have not been too many orders,” said Kenny Chan, a sales representative at fabric manufacturer Top South International in Shanghai. “There has been more buyer interest recently.”

Nicola Mullen, a design manager at Mosaic Fashions, the parent company of U.K. high street fashion brands Karen Millen, Warehouse, Oasis and Whistles, said it was important to be realistic.

“It is crucial to look at fabrics that are relevant to the season and on trend,” she said. “Rather than going for many different fabrics, it’s better to get five to six really phenomenal ones. Less is more in this climate.”

Textile manufacturers, adversely impacted by the economic crisis, have seen order volumes fall 10 percent to 50 percent, and suppliers in China have resorted to cost cutting in an effort to sustain business viability.

Top South International closed its Hong Kong office earlier this year so it could cut prices 10 to 15 percent.

“Everywhere in China, factories are cutting their profit margins,” Chan said. “With orders plummeting, there is no way businesses can survive if they don’t offer better prices to buyers who have become very price conscious.”

Some manufacturers believe eco fabrics are likely to be hit hardest because of the higher cost of production.

“With price-conscious buyers more cautious about what they are sourcing, the focus right now is on consumers’ immediate needs, not environmental worries,” said executive director Nabeel Abdullah.

Joe Lin, general manager at Taiwan’s Sinberly International, which exports organic cotton and recycled bamboo and charcoal to Europe, said the sourcing of eco textiles has dwindled because it doesn’t make economic sense to buyers.

“Many brands still have an interest in eco textiles, but they are not placing orders right now,” Lin said.

Manufacturers are taking an active approach to managing the downturn. Some are developing special-purpose and innovative fabrics, while others are exploring ways of producing cheaper products for the mass market.

Japanese manufacturer Ishinco recently started producing its own specialty polyester fabric mix in a bid to sharpen its competitive edge. It also has shifted some of its output in Japan to Chinese factories, where operating costs are on average 50 percent to 70 percent lower.

“There are two ways of weathering this downturn,” said Fred Arai, Ishinco’s general manager. “You can either evolve into the more specialized areas in order to set yourself apart, or reduce the production cost of your textiles for the mass market. We have done both.”

Top South International has created its own fabrics as well, mixing polyester and spandex, and is using new yarns.

“We haven’t secured orders for the new items yet, but this is a way of building customer confidence,” Chan said. “We are signaling to customers that we are still in business.”

“Manufacturers with the financial capability of moving into greener production should do it now, because this provides a competitive advantage,” said Pat Nie Woo, director of Hong Kong-based yarn producer Central Textiles. “It is an opportunity to move ahead of the game. To hold off, in my opinion, would be a mistake.”

Hans Buehr, Triumph International’s head of purchasing, said: “Companies should pursue sustainability even more strongly. It would send the wrong signal if people took the cheapest exit option just because times are hard. Those with a long-term strategy will be rewarded.”