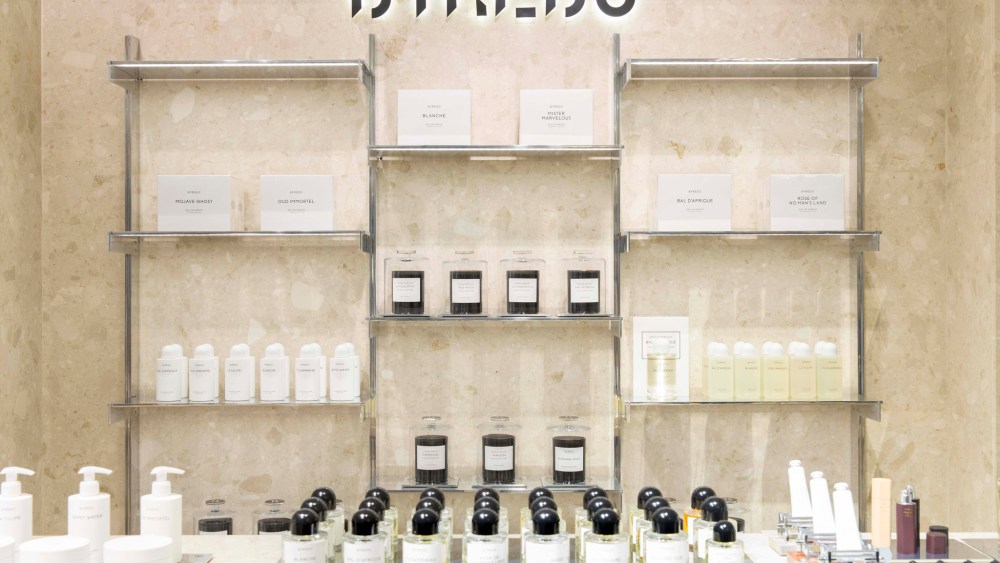 HONG KONG – Swedish fragrance house Byredo finally has a presence in Hong Kong through a partnership with Lane Crawford. “I initially looked at the city five years ago,” said founder Ben Gorham. “I had a bit too much on my plate then so we waited…[Now] the timing is great.”

Business has been brisk at Byredo’s new retail counter at Lane Crawford in the IFC mall since they set up in late September. Gorham declined to reveal numbers but said, “It’s been phenomenal. What we forecast for the month, we’ve already done in a week and a half.”

On Monday, he will open a second counter in Lane Crawford’s store in the Times Square mall. Both locations will stock the brand’s fragrance and beauty products. On this trip, Gorham is also scouting locations for a stand-alone store in the city.

“Hong Kong has these pockets of people doing interesting things,” he said. “It’s nice to see some of the younger designers are established and doing business here as well. It’s also showing that people are quite advanced.”

The move into Hong Kong is part of a long-term expansion plan in Asia. The brand tested the waters in Japan in 2010 and later ventured into Korea where it has opened three new shop-in-shops this year. “Korea is a really interesting market,” said Gorham. “They really have an appetite for new and interesting products — they are curious.”

Byredo is exploring opportunities to enter the market in Shanghai and Beijing. “We have a lot of mainland Chinese customers in our European and even U.S. businesses. I think we are excited and feel ready for that next step,” he said. “In my mind, Lane Crawford should have a strong position there, so they are definitely the natural choice.”

He believes the customer base in the region is evolving rapidly: “I saw this many years ago with our Russian business where [consumers] moved from big brands to more selective stuff. I think you’ve seen it and you’ll continue seeing it with mainland China.”

Byredo — which has 400 point of sales worldwide — opened a branded boutique in New York earlier this year. It has two other stand-alone stores, in Stockholm and Abu Dhabi.

Next year, Gorham is looking to open a boutique in London or Paris and create a store network in the United Arab Emirates, Qatar and Saudi Arabia.

Byredo recently released a new fragrance called Rose of No Man’s Land, which has a heady mix of pink peppercorn and Turkish rose petals as notes. Earlier in the year, they launched a line of hair perfumes, which Gorham said sold out twice globally. Plans to grow the collection are in the pipeline.

Asked what’s next, he replied, “I’m dabbling in color cosmetics. I have a clear idea that I am trying realize.…Hopefully I’ll be able to surprise people in the next year.”