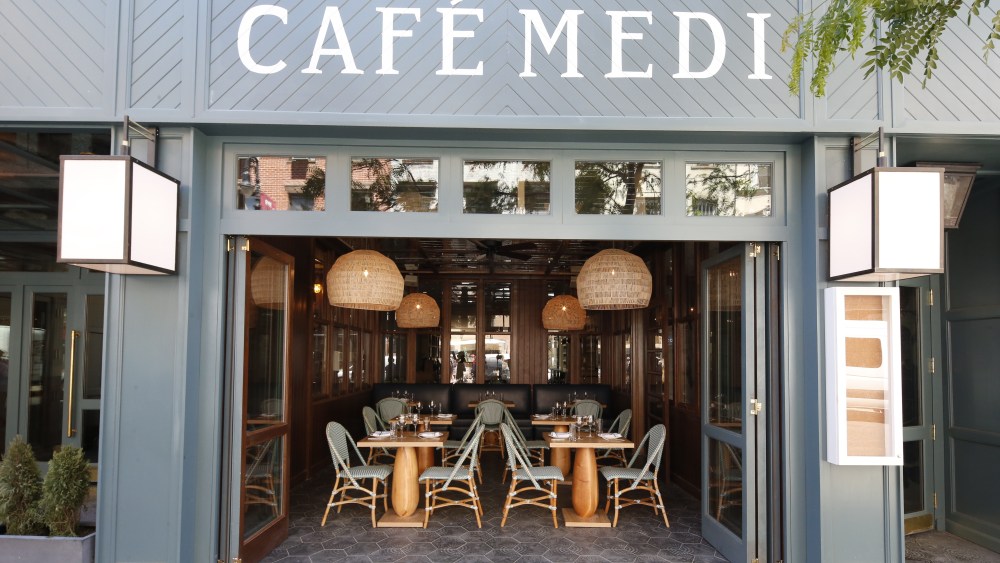 “We wanted to do something that was not necessarily already existing in the neighborhood,” says Corey Lane, partner at the newly minted Café Medi, situated inside the Lower East Side’s Hotel on Rivington. The Mediterranean restaurant, which opened Wednesday, is the latest to join the surge of restaurants and hotels opening in the stretch of lower Manhattan, including a new outpost of SoHo House on Ludlow Street, the popular Hotel Indigo and a second New York location for the Ace Hotel.

Lane, whose background includes Gansevoort Market, Beaumarchais, and Kiss & Fly, is partnered with Roberto Buchelli in Café Medi, which is helmed in the kitchen by executive chef Vincent Chirico of the Upper West Side’s Vai. Together they see it adding to the budding “it”-ness of the neighborhood. “I think that the Lower East Side is evolving and there’re a lot of wonderful things opening,” Lane says. “I live two blocks away, so I appreciate the rawness of it. It’s kind of like the last wild neighborhood of New York.”

Lane was approached by the hotel’s owner Paul Stallings for his expertise in New York City nightlife, after the success of his Meatpacking hotspots. “When I got into the Meatpacking in 2006 there was Pastis, there was Tenjune and there was One,” he says. “So in the time I was open, from 2006 to 2014, I saw everything come. I saw The Standard, Avenue, Tao, Abe & Arthur’s….I just saw the neighborhood kind of coming into its own, and I kind of feel that now.”

Lane and Buchelli had originally envisioned a French restaurant in the space, but adjusted their plans as the neighborhood shifted. “I was kind of going to rally my troops and bring French here,” he says, “But I didn’t know that the Major Food Group was building Dirty French [nearby].” He shifted to Mediterranean, a cuisine with a lightness that fits in with the neighborhood’s nightlife scene. Café Medi, which has already played host to a dinner party for Penelope Cruz, is situated next to newly opened lounge Jia, hidden two doors down behind a red graffiti door. “We came up with the crudo bar because I wanted to have this fresh, light food that was very clean, low-calorie, high protein,” Lane says. “We have a club next door so it’s perfect for guests who don’t want to get full because they’re gonna go to a club or a lounge after.”

The menu stays coastal Mediterranean, skewing toward vegetables and seafood and away from things like couscous and kebabs. Chirico has included Montauk Fluke Ceviche with lime; roasted king oyster mushrooms with white polenta and soft egg; whole snapper with spring onion, leek and niçoise olives, and charred octopus with jalapeño pesto and baby fingerling potatoes.

While some residents of the Lower East Side are less than thrilled with the idea of a blossoming of “cool” throughout their neighborhood, Lane argues that he gets it — and that this attitude is exactly what makes it appealing. “You know it’s tricky to say that it’s a new hotspot because people who are here are going to take pride in being here and they’re going to say, ‘we’ve always been hot,’” he says. “But the truth is, it’s a different layer that’s coming. It’s a little bit more upscale but on a casual level. Like, nobody is mistaking the Lower East Side for Midtown, no one’s coming here glammed out. Everybody appreciates that they can come here and be casual but you can still be chic at the same time. And I think that’s what we deliver.”