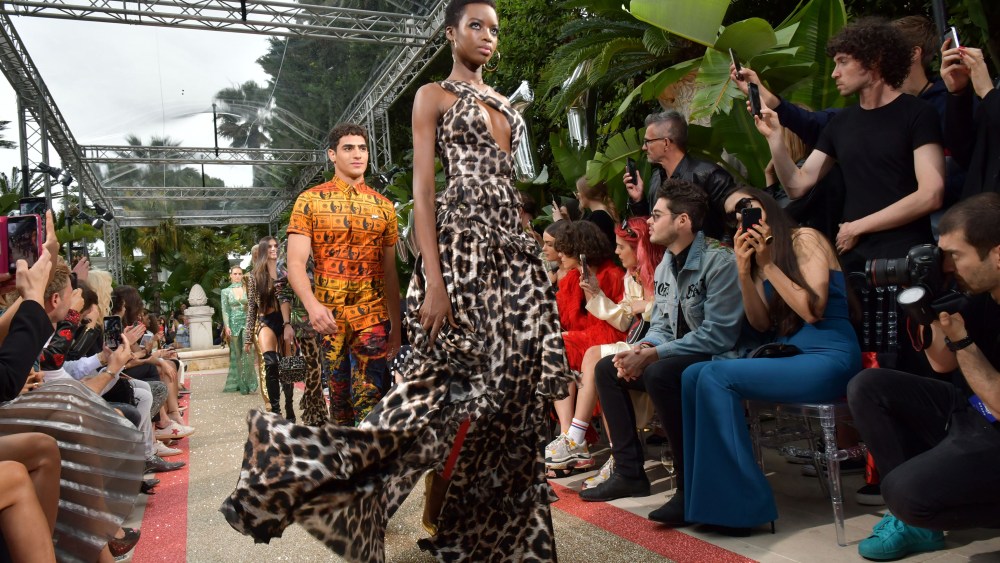 WELCOME TO THE JUNGLE: It was everything you would expect from a Philipp Plein show, and more.

For the second year in a row, Plein hosted a coed cruise show at his Cannes home during the film festival here, the only way he knows how: by going all out.

The garden of his lavish mansion, naturally called La Jungle du Roi, or the King’s Jungle, was decorated with elaborate flower arrangements. There was a pink and gold glitter carpet for the catwalk, fountains were flooded with the designer’s namesake Champagne and the garage where he usually keeps his supercars was transformed into a bar.

Plein’s close friend, artist Alec Monopoly, spray-painted a mural that stood by the entrance, and a DJ positioned at the top of the garden’s gigantic pool was playing rap music.

It’s all about staying true to yourself, according to Plein, who has no intention of letting go of the lavish lifestyle and the sexy clothes that make up his brand image.

“You have to look in the mirror and you have to become aware of who you are. It’s very dangerous if you try to be someone else. Philipp Plein will always be sexy because it’s in our DNA and I’m not scared of it at all. This is what the customers who know us will always expect from us,” said Plein during a post-show interview in his living room, as he monitored the room’s sound levels via his iPhone.

Is that his idea of heaven?

“No, heaven is another room but I won’t say anything about that. What happens here, stays here,” said the designer, who was lauded during the event for being a hands-on host, even taking the microphone to ask his guests to take their seats before the show.

However, he admits being nervous to open his house, which is filled with crystal chandeliers, rare art and expensive china in every corner, to such a large number of guests. “Last time I said that I didn’t want to do it again. When you bring so many people to your house, you don’t always like it, but seeing the collection and all my friends in town, it made sense,” he said.

The rain showers at the end of the show came to his rescue. “I won’t have a problem with people hanging out in my house now. Last time, the weather was beautiful and no one wanted to leave,” he added.

For this year’s show, Plein looked to the Eighties hit soap opera “Dynasty” for inspiration, delivering a collection that was all about high glamour and shine.

“‘Dynasty’ is all about the gowns, the diamonds and the scandal, so it’s a bit like the fashion industry. When we come to Cannes, it’s all about the red carpet dresses too, so it all fit really well,” said Plein, pointing to a new focus on red carpet dressing for his label and an opportunity to make his collections broader, covering everything from sport to evening wear.

Using the Eighties show as inspiration was also Plein’s way to offer his own take on the much-talked-about concept of female empowerment. “That era was about pussy power, someone has to say it. I think now women are more powerful than ever, they have a completely different standing, which is great because we are moving towards a more unified world,” he said.

The show will travel to Moscow later this month, while in the future, Plein is planning an even bigger extravaganza at his Bel Air home, which is still in the making. “You really won’t believe the scale. Even I can’t believe it sometimes. It’s a 4,000-square-foot house, it will be crazy,” he promised.